This post is part of Rethink Charity's series on the EA Survey 2019, which provides an annual snapshot of the EA community. In this report, we explore donation information provided by EAs in the survey. We have already explored demographics [EA · GW], cause prioritization [EA · GW], careers and skills [EA · GW], and their geographic distribution [EA · GW].

Earlier in this series we have shown that the most popular career paths that effective altruists in the survey (EAs) plan to follow are in earning to give roles (38%) and 55% (960) said one of the top ways in which they are interested in becoming more involved in the EA community was to give more.[1] While there has been discussion in recent years about whether earning to give should be the default strategy [EA · GW] for most EAs or if only a small proportion of people should earn to give long term (also see discussions here [EA · GW] and here [EA · GW]), there is a general consensus that donating at least some amount is a good path to impact for most EAs.

As in previous years, there was a very wide range in amounts donated (note the 2019 Survey collects reports of the amounts donated in 2018). All amounts are in USD ($).[2]

As the graph below of the annual donation reported by each individual donor shows, a very small number of very large donations dwarf the size of most others. 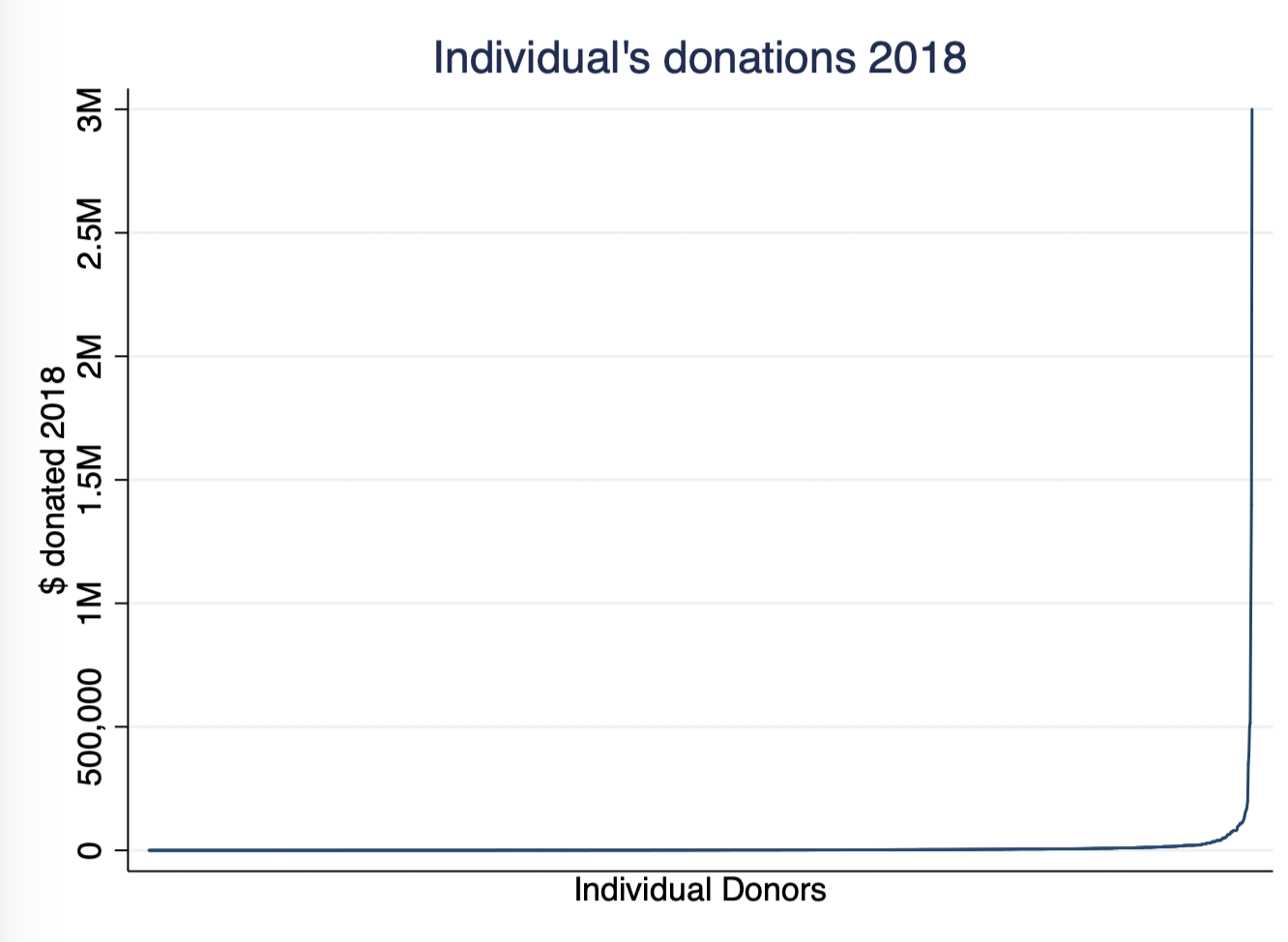 The following histogram shows the number of donors of different annual donation amounts in our sample. For illustrative purposes this histogram only represents data from those who donated $1 or more (and is presented with a log scale).

Like last year, we created a graph showing the proportion of total EA donations that came from donors of certain sizes and requested a cumulative donations graph (below). Perhaps, even if the largest donations are many times larger than the rest, much of the total might still be coming from a very large number of smaller donors? 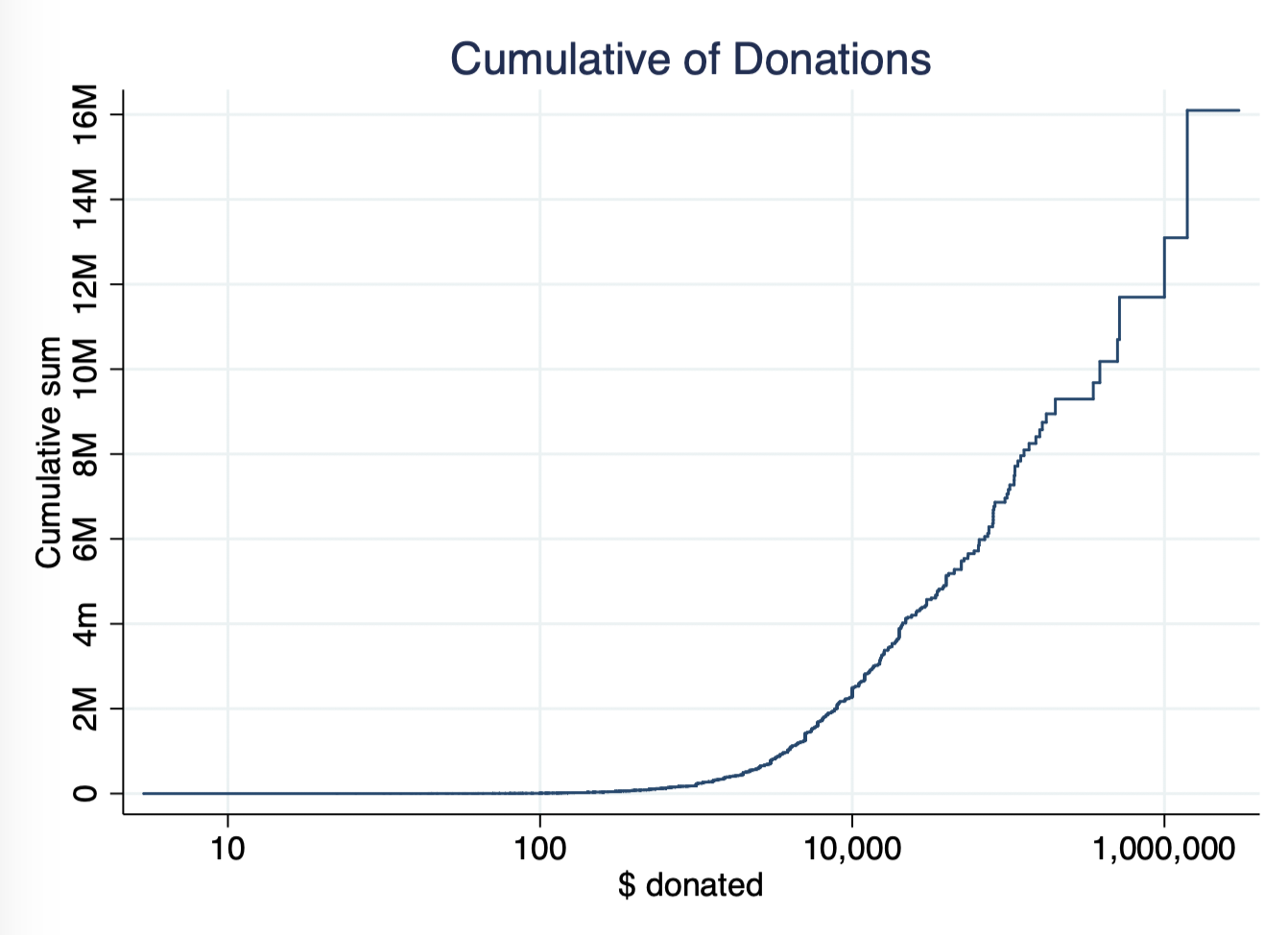 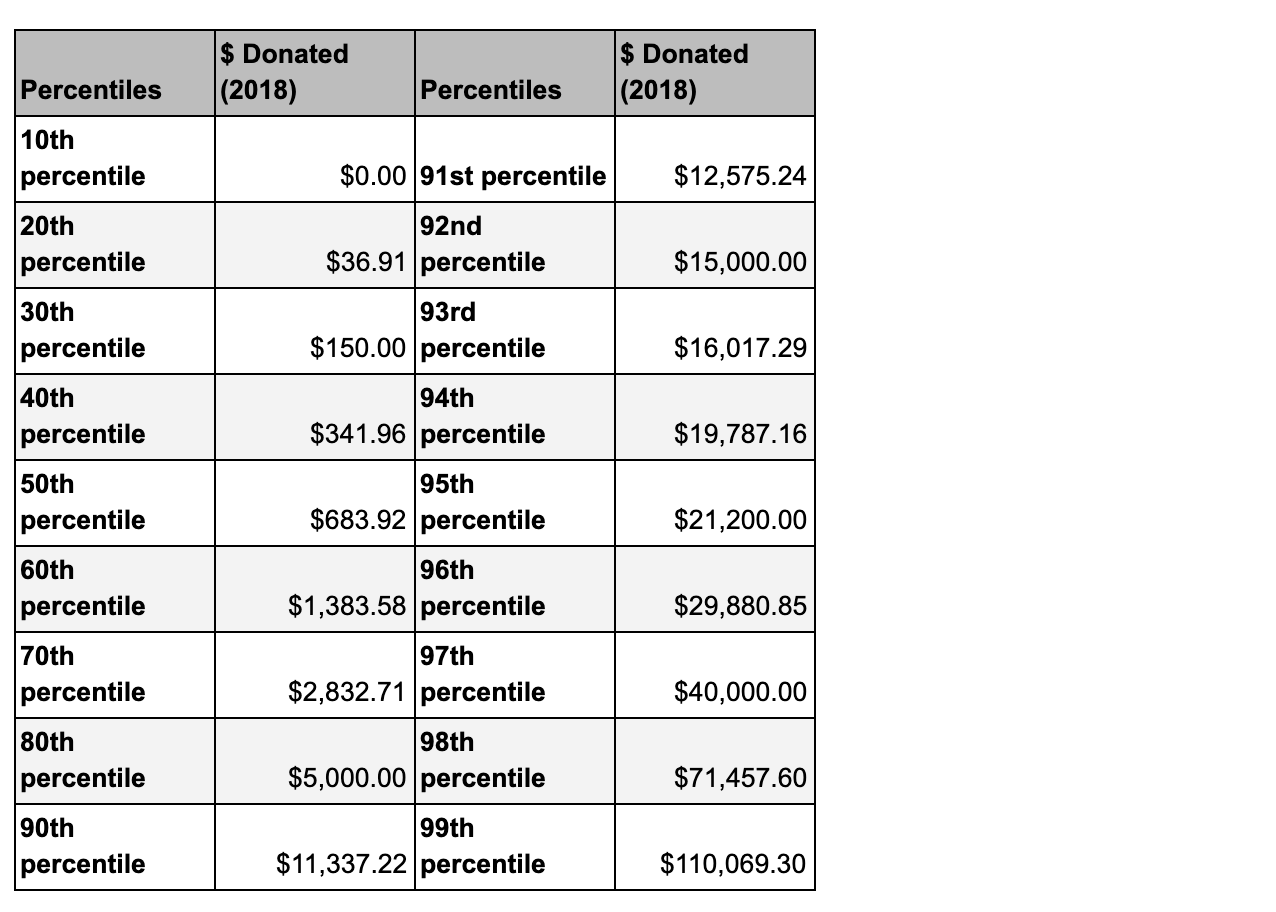 We also looked at the percentages of pre-tax income that EAs were donating, based on the 1,563 EAs who disclosed both income and donation data. As in previous years, most EAs were donating significantly less than the 10% Giving What We Can Pledge. However, as the graph below shows, there is a marked ‘bump’ in the donors giving at around the 10% figure, perhaps due to the Giving What We Can Pledge target around this amount, or due to the figure’s wider popularity as a target (e.g. in tithing). 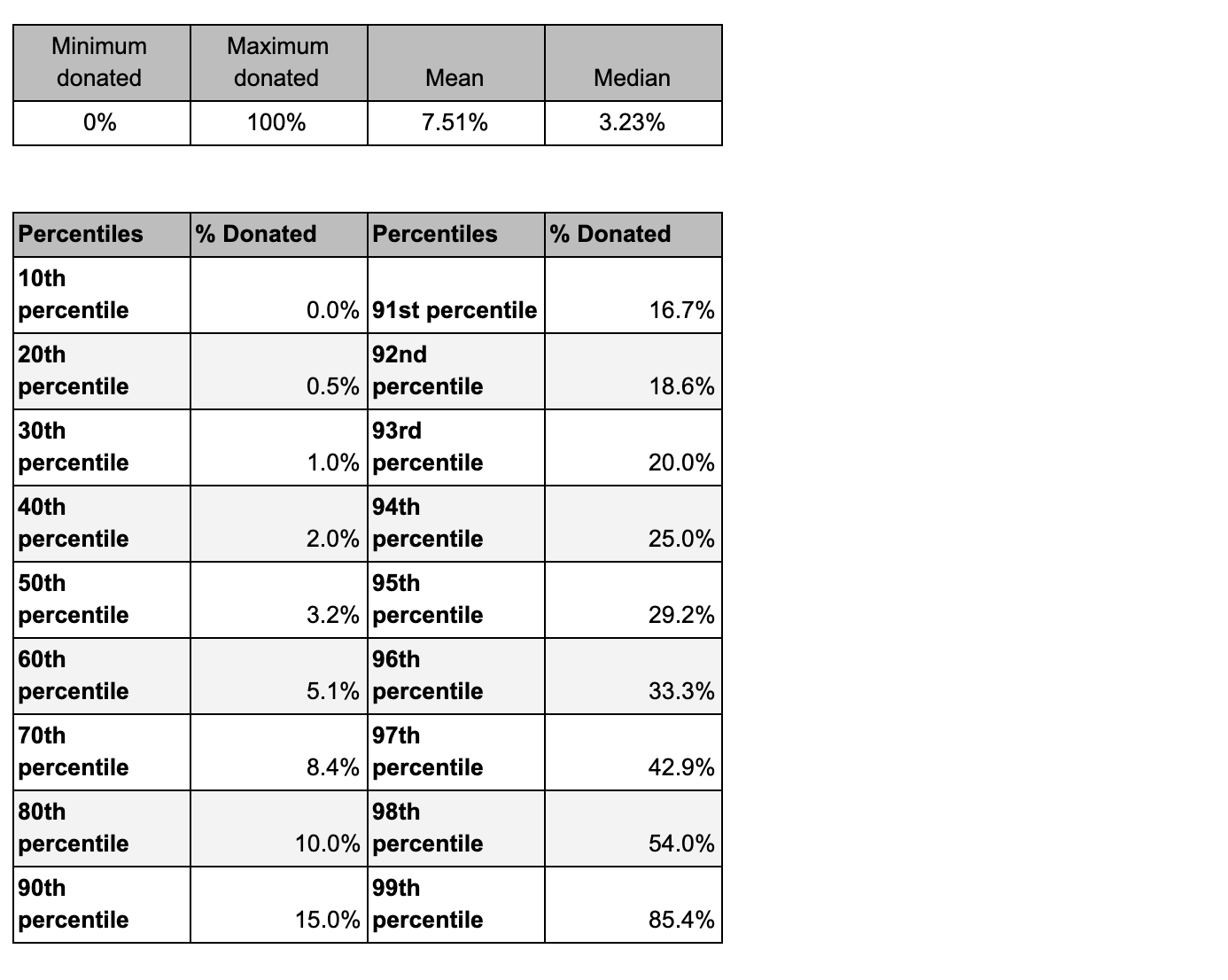 Dividing the data of where EAs in the survey live into four broad geographical areas, as we did in the geography post [EA · GW], we see the median amount donated in 2018 is highest among EAs living in the USA.

We can see that large metropolitan EA hubs New York City and the San Francisco Bay Area have large median donations of around $4,000 compared to other large cities like London, which has a median donation below around $770. Smaller hubs like Oxford have lower median donations, but also might be expected to have lower incomes due to a high student population.

Below we see the median percentage of income donated by Oxford EAs is very similar to that of San Francisco Bay Area EAs (~6.5%), who on average have higher incomes. Again we see that London EAs fall behind other metro hubs in terms of % of income donated (2.9%). 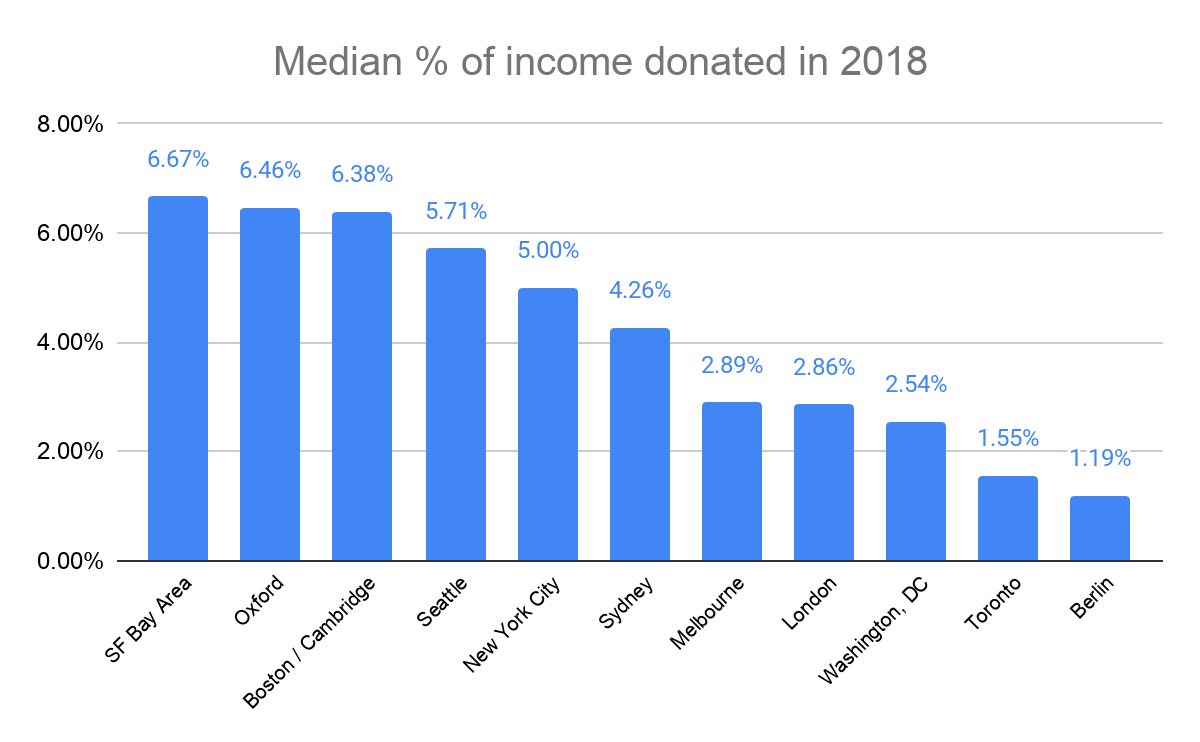 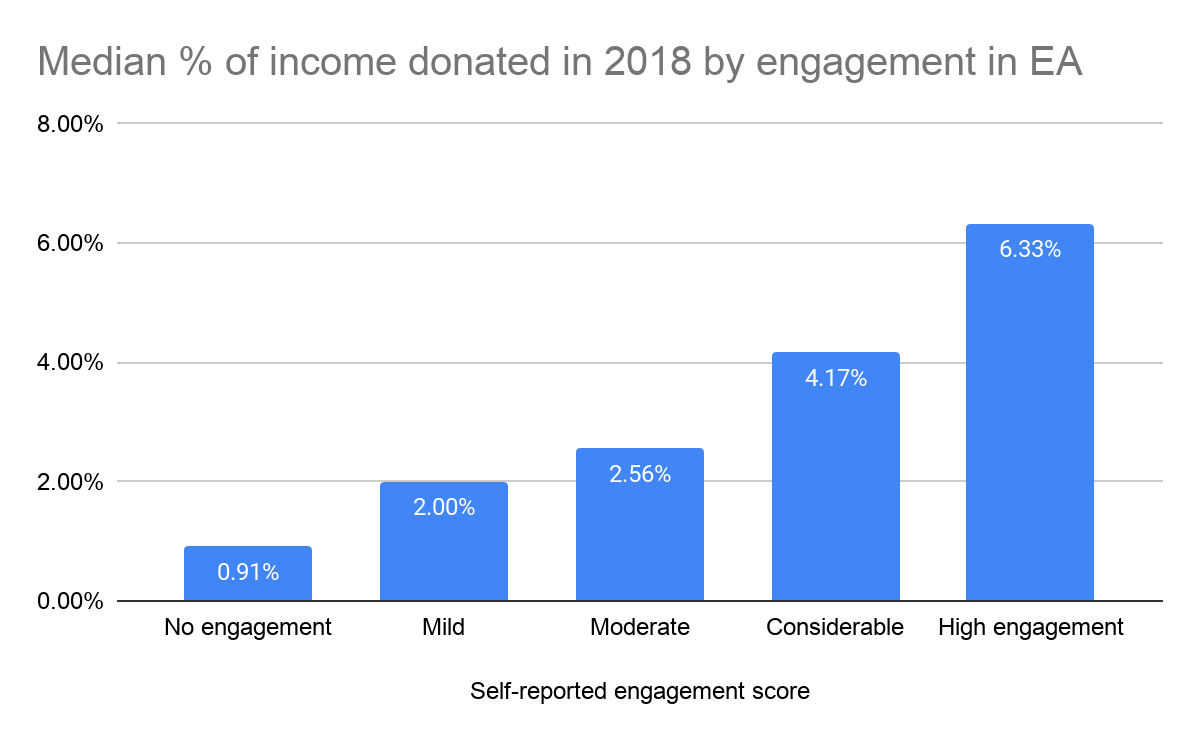 We see highly engaged EAs donate the highest percentage of income. This is despite the fact that less engaged EAs tend to have higher median incomes and more engaged EAs tend to more often be students than less engaged EAs. The increasing trend appears whether one looks at full-time employed non-students or students. Highly engaged EAs report the highest percentage of income donated but are less likely to be following Earning to Give career paths (25% among non-students) compared to lesser engaged EAs (42% of considerably engaged, 48% of moderately engaged EAs, 38% of mildly engaged EAs, 22% of non-engaged EAs). The median annual donation is highest among the second most engaged group of EAs, with other engagement levels having similar median amounts to each other (except no engagement for which the number of respondents is very low anyway).[4] 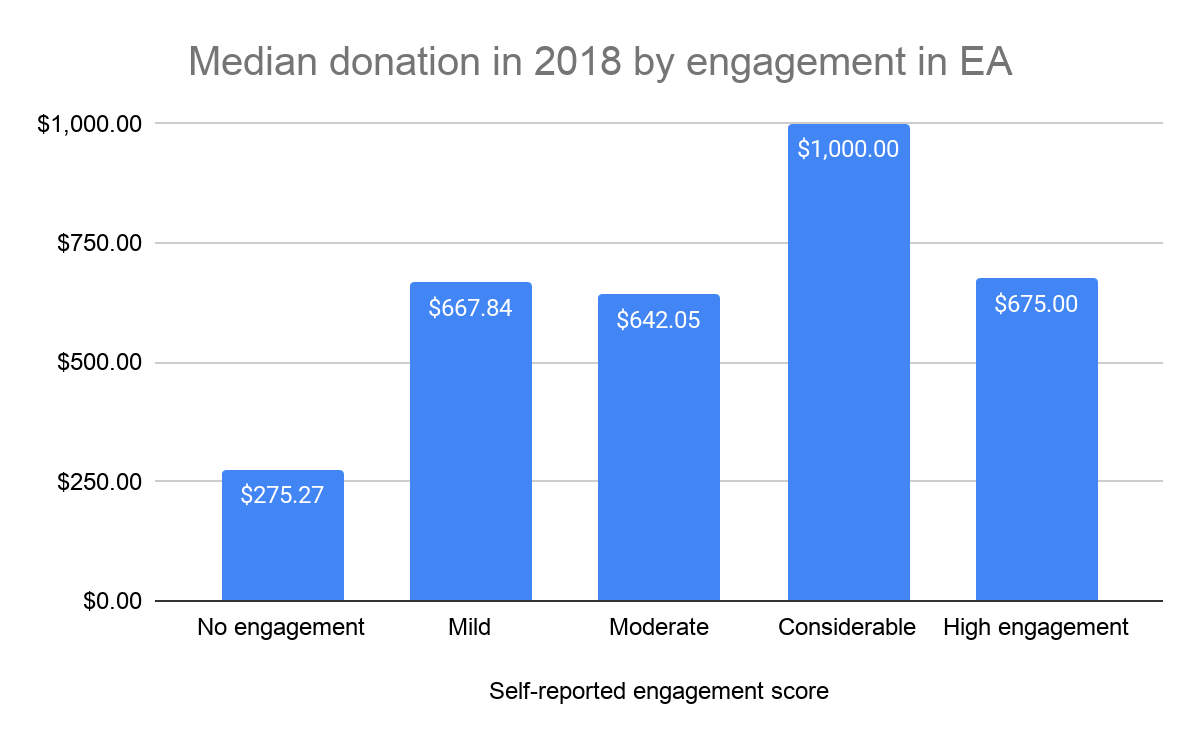 In previous years, readers have commented on the large numbers of EAs who appear to be donating $0 or close to $0 and at their surprise at low donation levels overall. This may be less of a surprise today compared to when earning to give and the Giving What We Can Pledge were emphasised more in the community, but it still appears to us to be worth investigating.

Respondents also offered open comments about their donations. Of the 146 who reported donating nothing and gave a comment, ~39% reported not donating because they were a student, ~20% reported that their income was too low to donate, another ~10% reported planning to give later, and ~8% reported that they were donating-in-kind (such as working at an EA organization or working in an EA cause area).

Many EAs are students (of those who reported donation information, ~31% were students) and students are generally expected to be donating lower amounts (the GWWC pledge only requires students to donate 1% rather than 10%). True to expectations, our data confirms that students do donate less in both absolute terms and as a percentage as income. 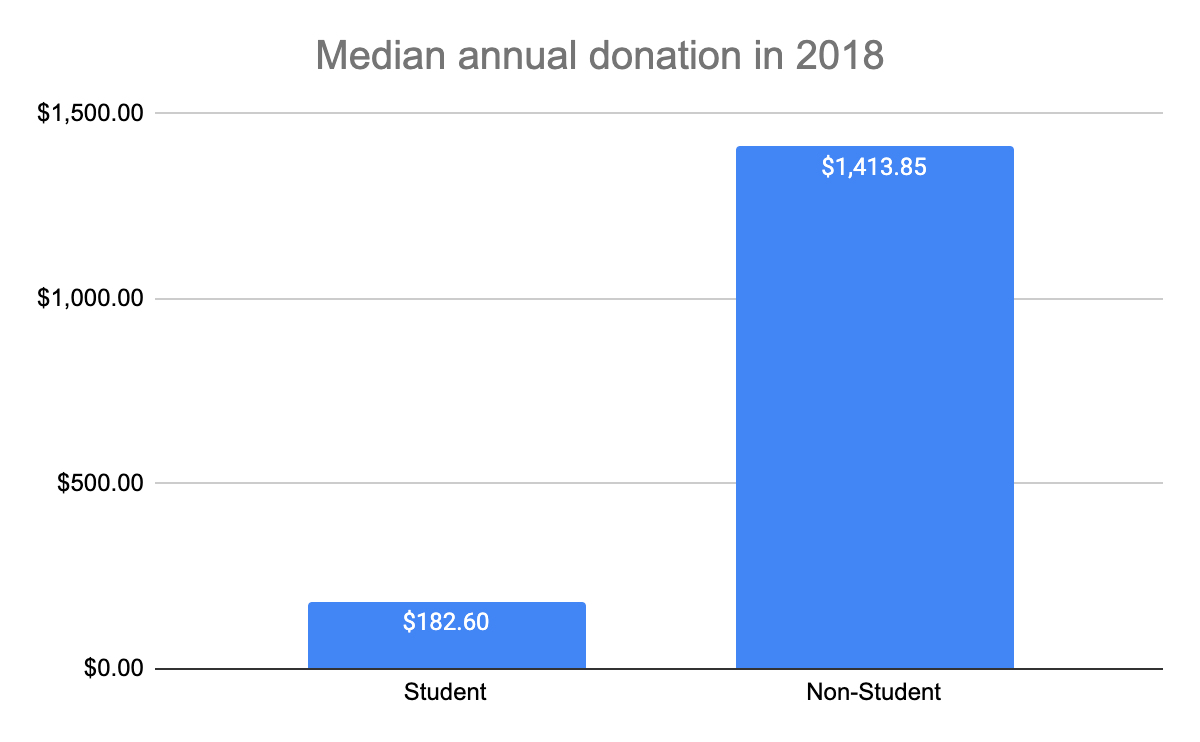 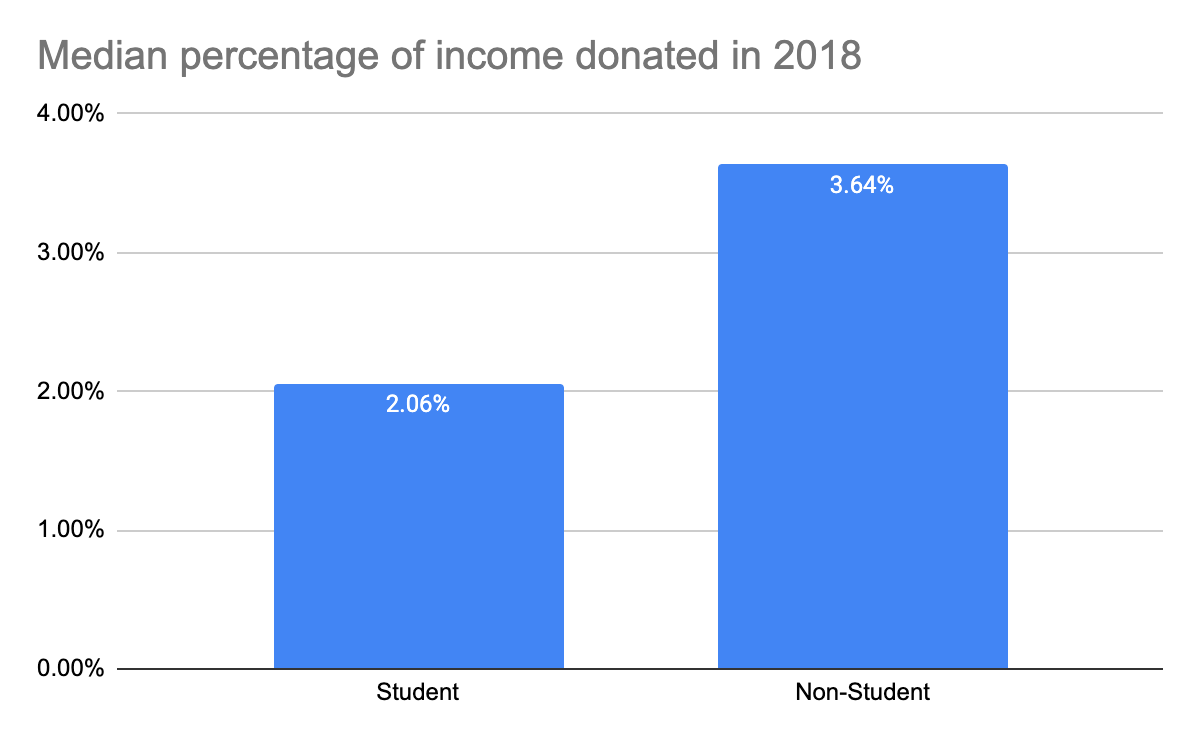 Similarly, many EAs in our sample, though not students, may not be employed or fully employed. When we exclude both students and those who are not employed full-time, median donations are, again, substantially higher. 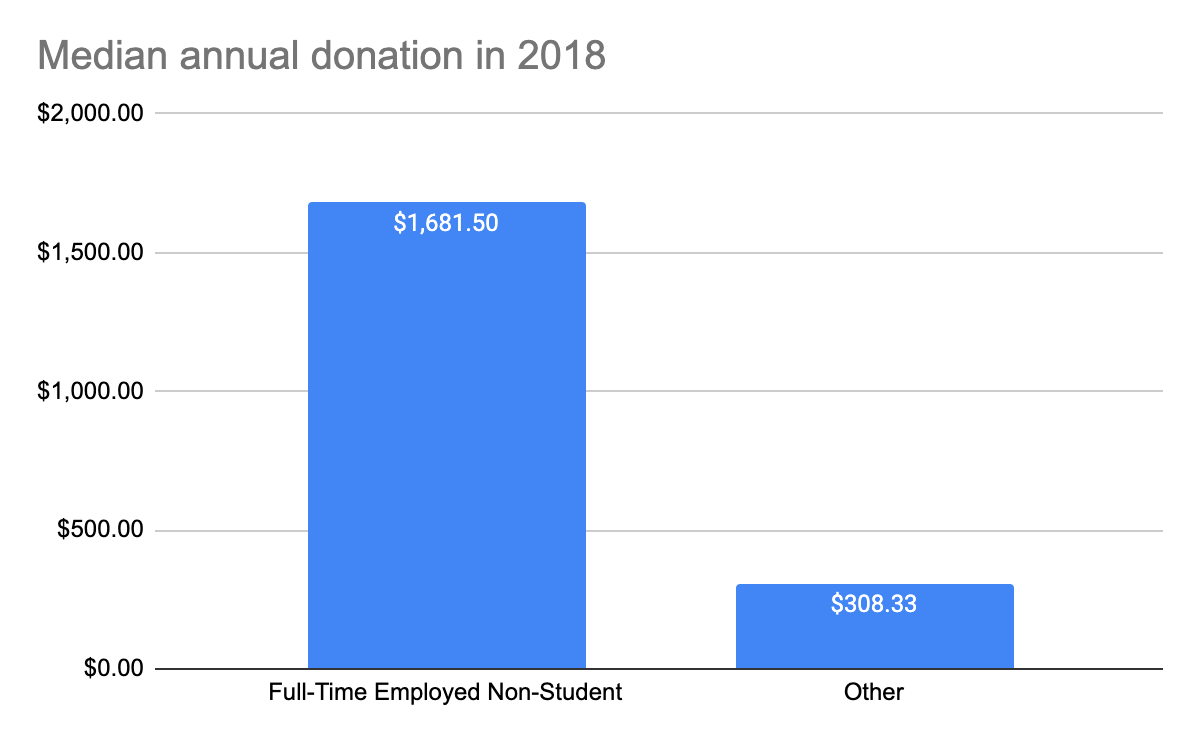 The fact that donations are higher among full-time employed non-students may well be expected to be largely due to higher income. Indeed, within the sample as a whole, we found that donations in 2018 were strongly correlated with income ( data in the figure below excludes donations and income below $1).[5] 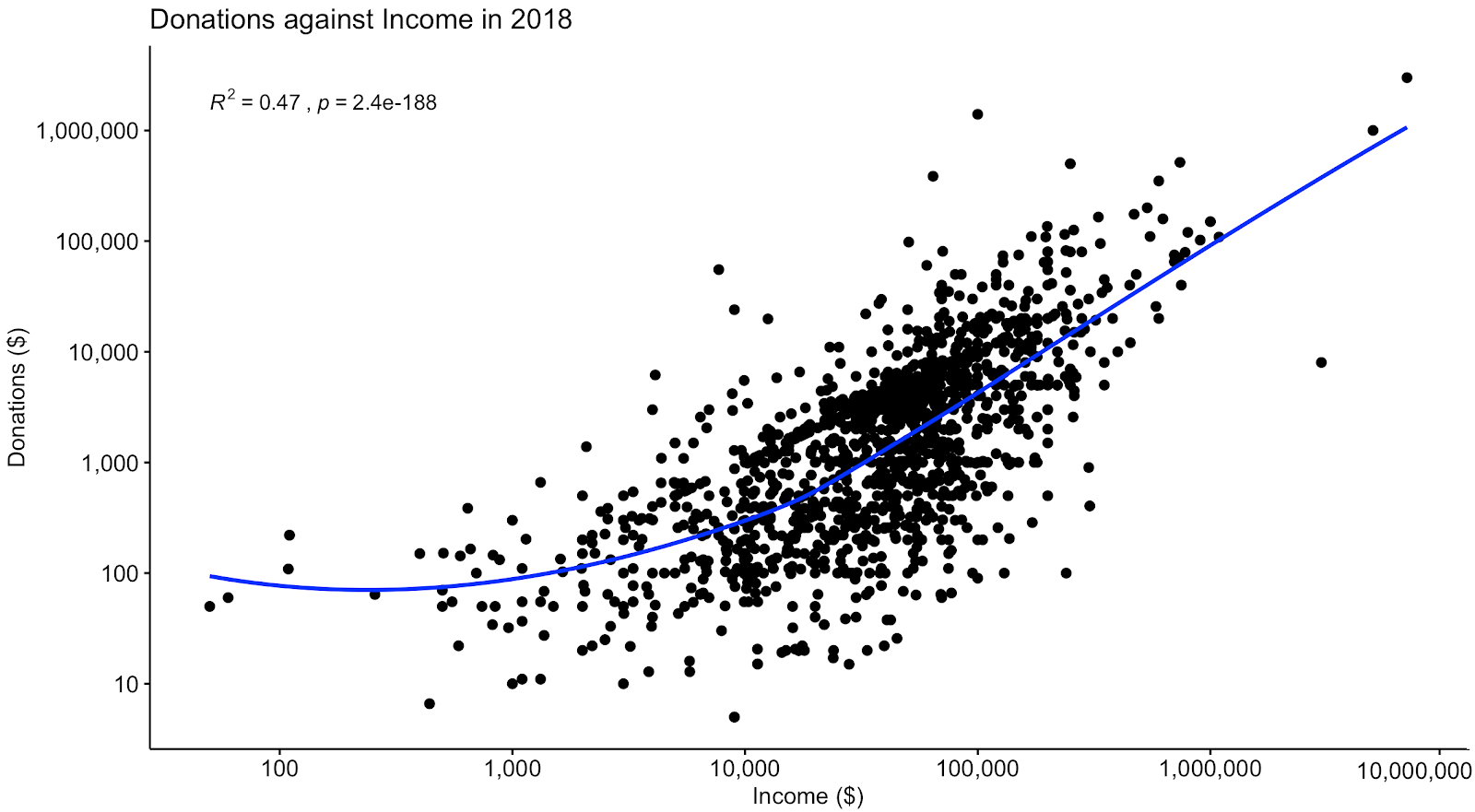 Restricting our data to only full-time employed non student EAs earning more than $10K, the median percentage of income donated in 2018 was less than 3.38% for 50% of this group, and their median total donated is $2,000.

Giving What We Can Pledge

The observation that so many EAs in our survey were donating much less than 10% of their income to charity suggests the question: how much are self-reported GWWC Pledge takers donating?

In the EA Survey 2019 data, the median percentage of income donated by someone who had taken the GWWC Pledge was 8.87%, short of the 10% target, though there could be some noise around how respondents reported income and donations. Nevertheless, this of course could be influenced by GWWC Pledge takers being students, not employed or only recently having taken the Pledge. We addressed this question in more depth last year [EA · GW]: GWWC members donate more than non-GWWC members, both absolutely and as a percentage of income but ~40% of self-reported GWWC members were not reporting donation data that is consistent with keeping their pledge, a trend most likely to be the result of attrition over time. 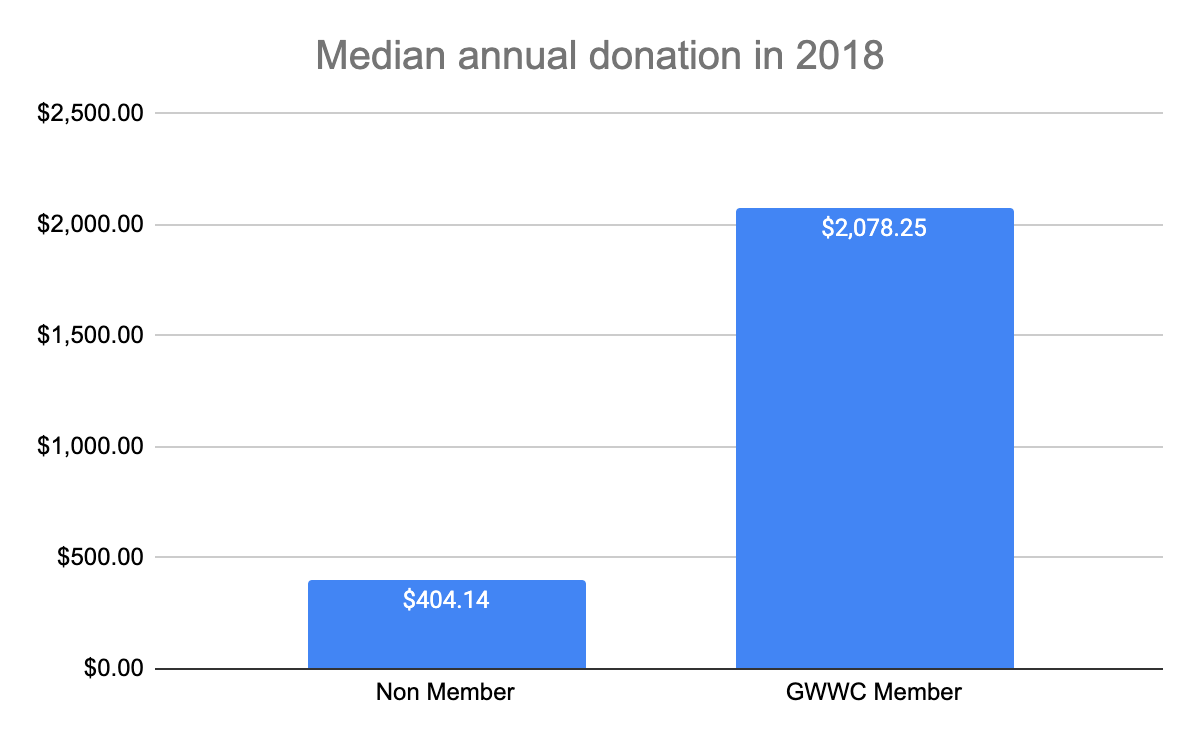 Like last year, we see a general trend of veteran EAs donating on average more than new EAs. Those who have more recently heard of EA tend to be younger, more likely to be students (or may be earlier in their careers) and so have a lower income. In addition, new EAs might also be expected to be less likely to be extremely dedicated or willing to donate large sums right away. There may also be some survivorship bias, where those EAs who report first hearing of EA in earlier years, and are still taking the survey in 2018, may be more likely to dedicated, highly involved (and perhaps higher donating) EAs. It could also be that early adopters of EA were more influenced by more prevalent community norms at the time of giving more and have kept up this high giving rate even while the focus of the movement was broadened over time. 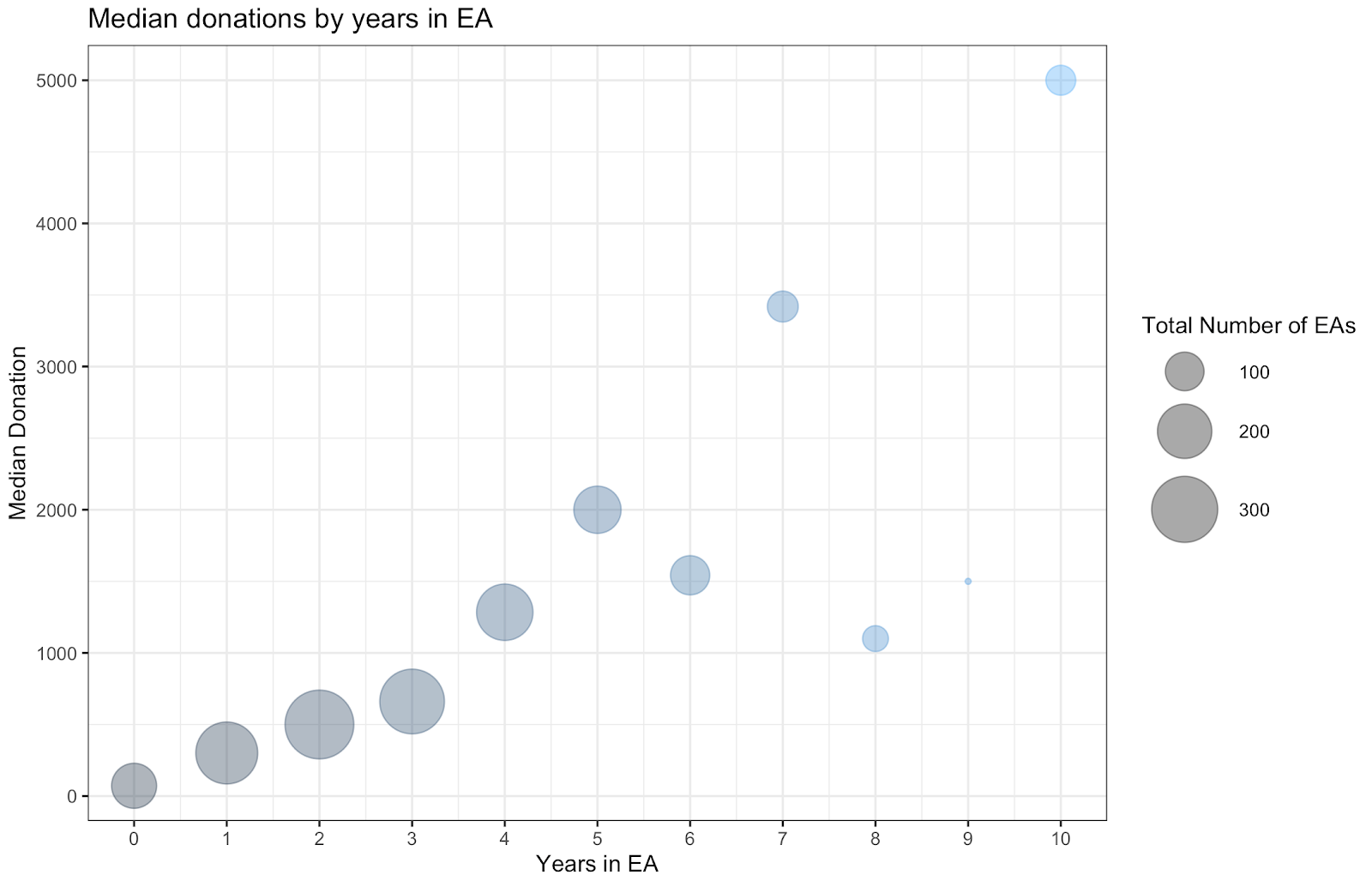 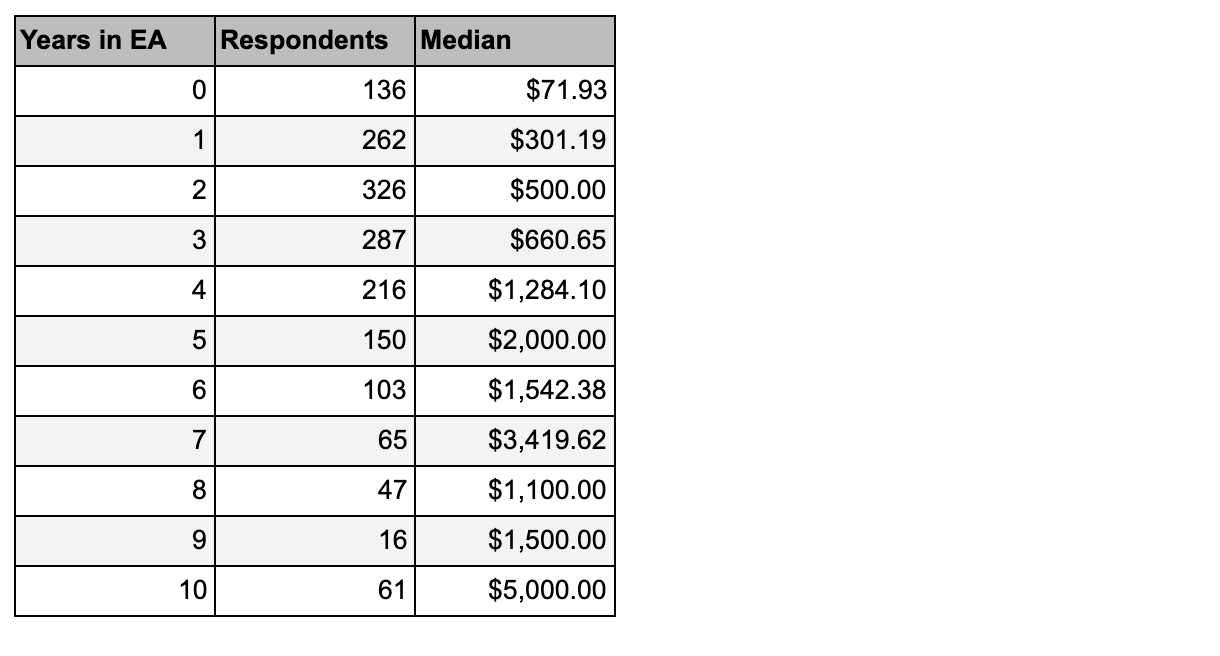 Based on the results last year, we again examined the effect of income, student status, number of years involved with EA, and membership in GWWC as potential predictors of donations. The results of a regression analysis are again suggestive of a relationship between these factors and donations, namely that those with higher incomes and GWWC members tend to donate more than those with lower incomes or who are students. Like last year, we ran a full model with all interactions, and used backwards selection to select predictors. Individual income was the strongest predictor of donation amount, followed by a positive impact of membership in GWWC interacting with income (link to regression table). Before analysis, one outlier with large influence was removed (individual income >$7 million), and the data were log transformed, centered, and scaled to improve normality. As previously noted, there was a small negative impact of being a student on donation amount. As seen in the figure below which charts donations against income with a lowess regression line, this effect was slightly mitigated by being a member of GWWC. Attempting to model the likelihood of donating any amount versus donating nothing did not prove very fruitful as models with an even larger set of potential predictors could only explain ~6% of the variance. 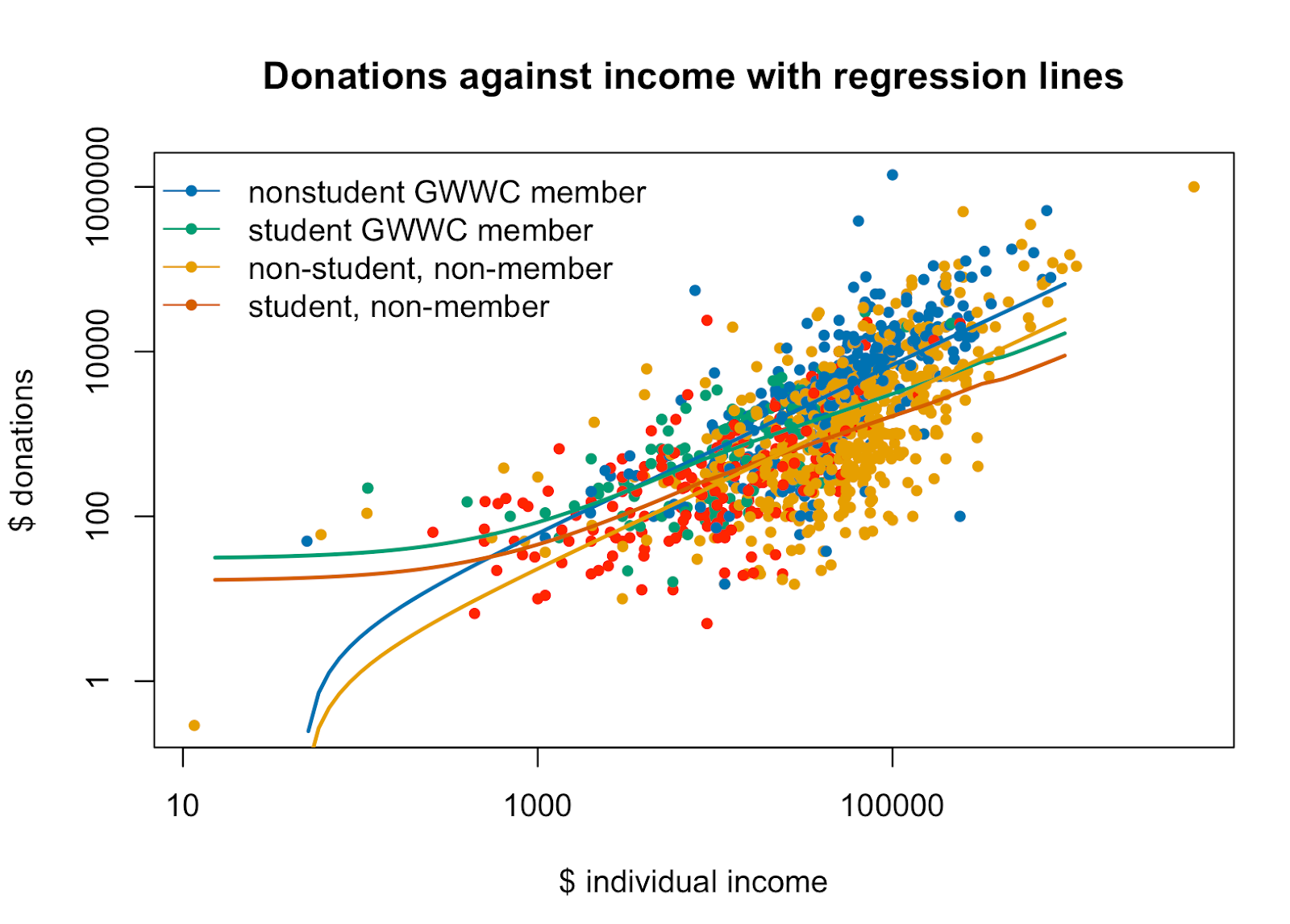 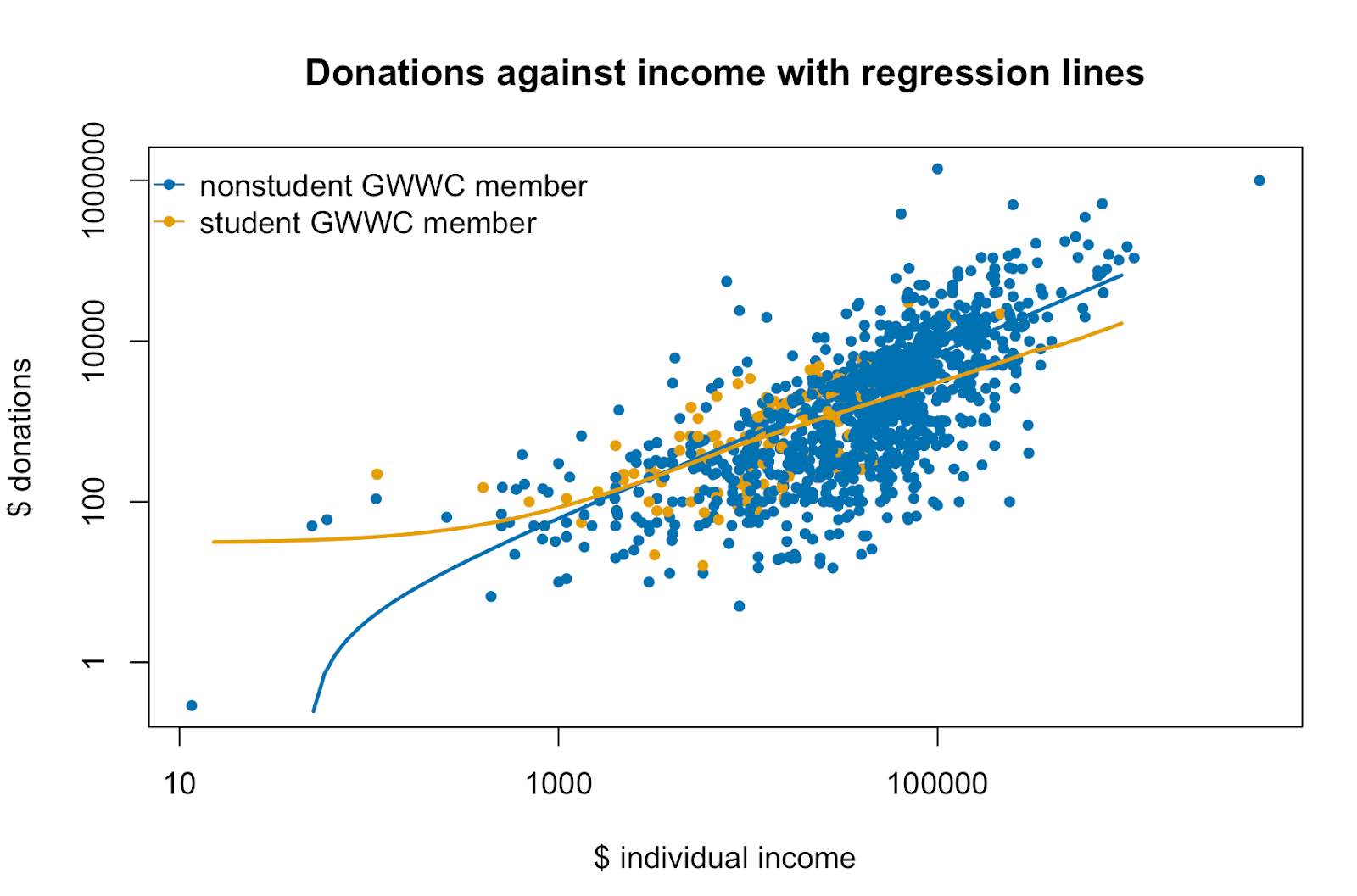 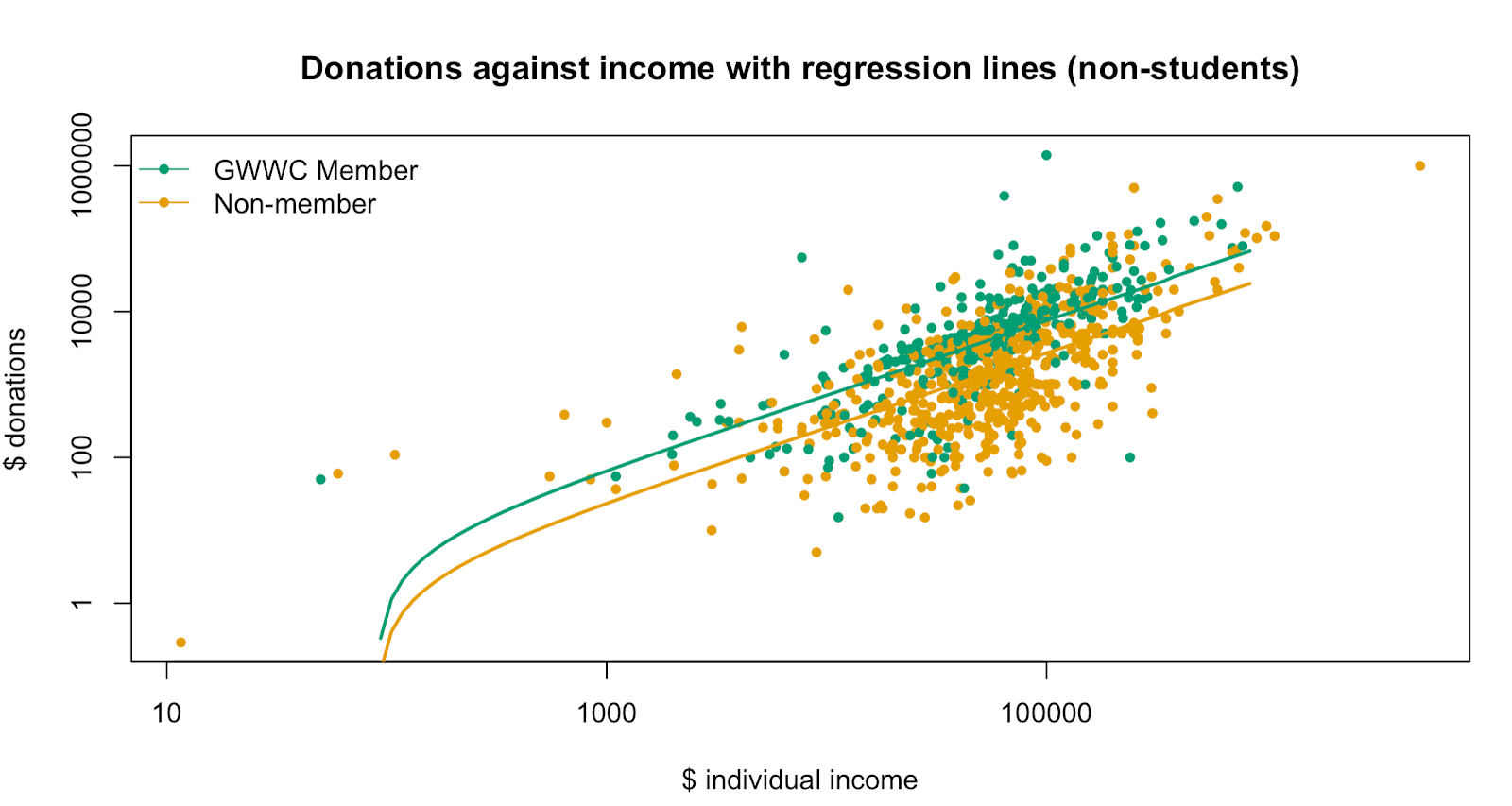 Which Charities are EAs Donating to?

As in previous years, GiveWell charities, led by AMF, received among the most reported donations. GiveWell itself attracted substantially more funding and more donors than in 2017, among those who reported donations in our 2018 and 2019 surveys. The combined EA Funds would be the 3rd largest recipient. The Effective Altruism Foundation received the highest mean donation (excluding CFAR as only 1 respondent reported donation information). When grouped into cause areas, the largest amount of donations went to Global Poverty, although the largest mean donation was for Meta Charities. 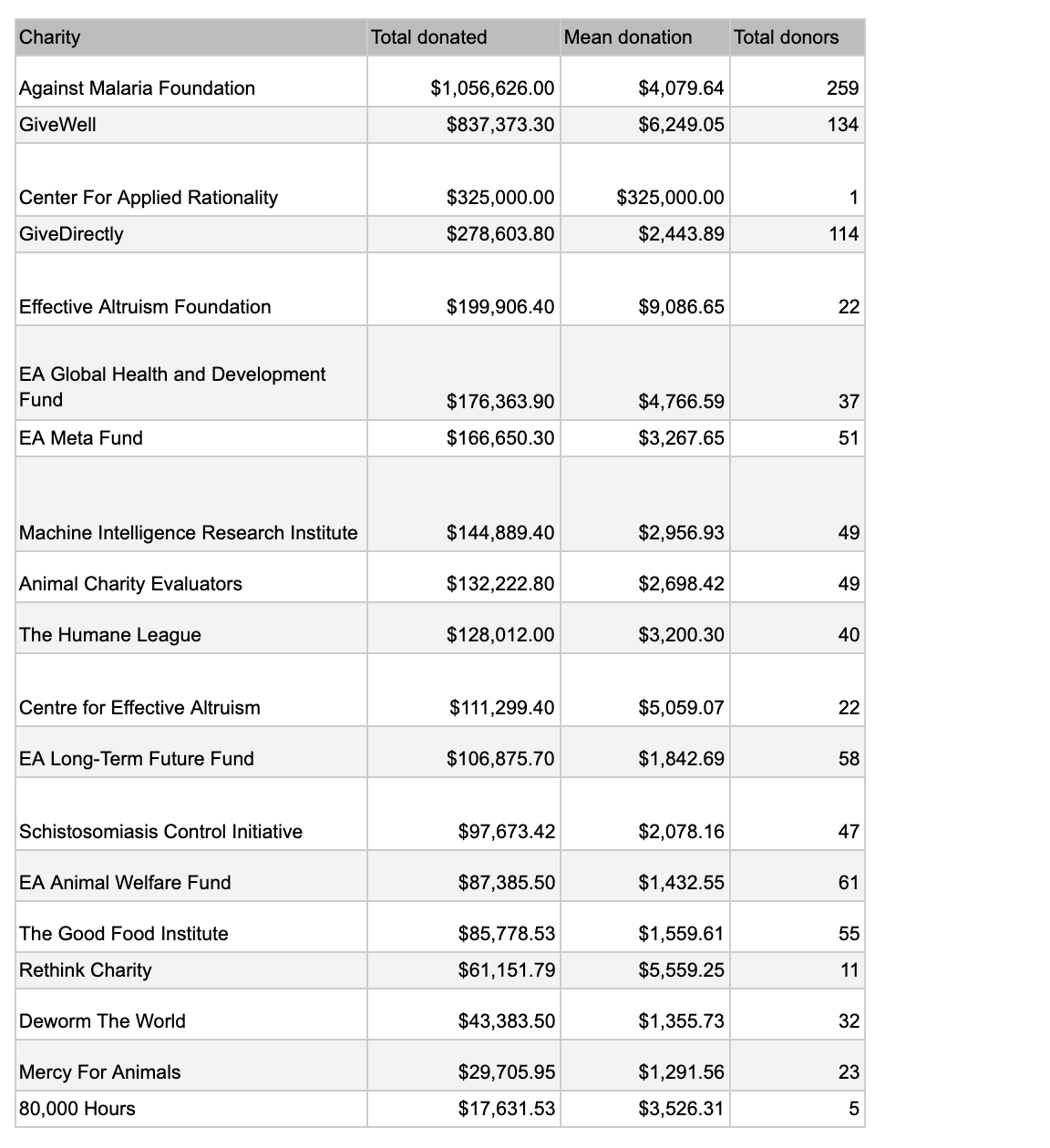 The original version of this post included a table with the incorrect number of total donors per specific charity.

This essay was written by Neil Dullaghan. Thanks to David Moss and Peter Hurford for comments and Kim Cuddington for data analysis assistance.