Vote pairing is a practice whereby individuals agree to swap votes. Wikipedia summarizes it as:

In United States presidential elections, vote pairing usually comes in the form of voters from "safe" states, or non-swing states, voting for third-party candidates, and voters from swing states voting for their second-preference candidate. This form of vote pairing encourages third-party support while minimizing the risk that the more favored major-party candidate will lose electoral votes in the nationwide election (i.e., the "spoiler effect"). In the 2016 United States presidential election, this has usually manifested in the form of supporters in swing states of Libertarian candidate Gary Johnson and Green Party candidate Jill Stein swapping votes with supporters in blue states of Democratic candidate Hillary Clinton.

The practice’s legality has been upheld by the Ninth Circuit Court of Appeals, and large numbers of swaps occurred during the 2000 and 2016 elections.

Note: for simplicity, this article talks about how to increase the number of votes to a major party candidate via vote pairing, but it does not consider the value of that increase. In 2016 vote pairing helped the Democrats, but I expect that the effectiveness should be similar if/when the tables are turned and vote pairing benefits Republicans.

Rather than talking about “Candidate A” and “Candidate B” I use the names “Clinton” and “Trump”, but this article should not be construed as arguing whether Clinton or Trump was a better candidate.

In this article, I discuss the benefits that MMC provided, estimates of the cost, estimates of what my counterfactual impact was, and guidance on what we should have done better.

Overview of Make Mine Count

I became interested in vote trading several months before the 2016 US presidential election. At the time there were two major vote pairing platforms: Make Mine Count and #NeverTrump.2 I volunteered my time over a couple months to make improvements to the MMC platform.

The platform worked as follows: users would sign up, listing their state and candidate preference. Clinton voters in safe states would be paired with third-party voters in swing states, and they would be connected through a secure, private messaging system. After being connected, they would message each other to ensure that both wanted to be paired, after which they would each vote for the other’s candidate. 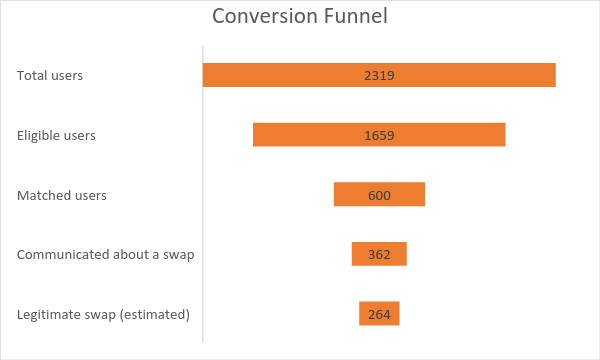 Out of the 2319 people who created an account, 610 were matched and I estimate that a total of 132 votes were cast for Clinton in swing states.

This breaks down as follows:

Additionally, because MMC had a surplus of Clinton voters, we sent these voters a recommendation to use a different site (Trump Traders (TT)) which had a surplus of third-party voters. 75 of these users made a TT account and, since these users were highly motivated, a large fraction of them presumably went through with a swap, but I do not have access to that data. [TT did not return my request to share data for this article.]

The VPI of each state fluctuated throughout the campaign, and for simplicity I used the most recent numbers (calculated November 7, 2016). Obviously, vote pairing is more valuable when the campaign is close and less valuable when it’s a sure thing, so depending on which numbers you use and when you calculated those numbers, you will get different estimated impacts. I also assumed independence (i.e. one voter with a VPI of 2 is as good as two voters with a VPI of 1) – this is slightly untrue, but I don’t think it makes a big difference at the scales I am talking about in this document.

The total impact was 4.7e-6 ~= one in 210,000. Another website (Trump Traders) advertised 45,000 users but was only two-thirds as effective on a per-user basis as MMC.4 If they had success rates similar to ours, they would’ve influenced Clinton’s chances by about one in 16,000.5 I was not able to find numbers for #NeverTrump, but it seems plausible that all the sites combined increased Clinton’s odds by about one in 15,000.

It seems unlikely that very many people would have paired with someone on their own, without a vote pairing site existing. Therefore, the counterfactual is mostly about what fraction of these people would have otherwise used a different site.

Counterfactuals are always very hard, but we can create some bounds:

My guess is that it’s more towards the upper side (10% is a very high click through rate for any email).

One general problem I found is that people wanted to create their own vote pairing websites instead of working together – this is obviously inefficient due to the network effects required for vote pairing to work, but I wasn’t able to make that argument successfully.

There were 4 vote pairing websites I had some contact with, but the only time I was ever able to successfully convince people to not duplicate work was when I sent some of our (MMC) users to a different site. (No one seemed interested in “sharing” in the true sense of the word. Neither Trump Traders nor #NeverTrump responded to my request to share data for this article, for example.)

In terms of things I personally can claim credit for:

This implies that I got 72 Clinton votes with my 7 hours of work. This is incredibly high – 20-30 times higher than “traditional” outreach like going door-to-door (which I also did).6

Note that almost all of this impact is due to the fact that I was willing to join someone else’s project instead of starting my own. Starting a new vote pairing website is inherently much less cost-effective because of the setup costs and time and the fact that it is splitting apart the voter pool, making it more difficult for people to be matched.

As an example of what a small amount of highly targeted advertising can do, Linchuan Zhang posted on his Facebook that Trump Traders needed more Clinton voters, and that one post resulted in 24 TT accounts (= 12 Clinton swing state votes). It probably took him less than 15 minutes to write this post, which means that it was about 100 times as productive as going door-to-door.

Things to do differently

If the 2020 election is as high-stakes as the 2016 one, and I am similarly positioned to how I was in 2016, I will very likely work on voter pairing again.

I would like to thank Steve Hull for creating MMC, open-sourcing it and sharing anonymized data; Linchuan Zhang for talking about the election and vote pairing with me; the Trump Traders team for accepting referred users and sharing conversion rates; Rob Wiblin, Gina Stuessy and Linchuan Zhang  for reading drafts of this article; and Rob Wiblin for the general motivation for becoming involved in the campaign.