I originally wrote this summary in my capacity as a researcher at 80,000 Hours to save time for the rest of the team. The view presented in the paper (and person-affecting views in general) would have important implications for prioritizing among problems. (Listen to the first Hilary Greaves 80,000 hours podcast episode to hear some about why.) Thus it seemed important for us to engage with the paper as a contemporary and respected representative of such views. Having written the summary, it seemed worthwhile to post here too (especially once Aaron Gertler offered to help me format it - thanks Aaron!)

This is a very spare but pretty comprehensive summary of Christopher Meacham's 2012 paper, "Person-Affecting Views and Saturating Counterpart Relations." Hilary Greaves of the Global Priorities Institute at Oxford said a couple years ago that the view presented in this paper was "the best theory that [she's] seen in person-affecting spirit."

Although presenting my own views is not the purpose of this post, I wrote out my reaction for 80,000 Hours when I did the summary, and have shared it at the end of this post as well. In short: although I share some of the intuitive motivations of the view, and I thought the view was impressive and interesting, I don't find it particularly plausible. This decreased my confidence that person-affecting views can be made to work.

(i) To create a person-affecting view (i.e., a view according to which, in a slogan, what's good is 'making people happy, not making happy people') that avoids or solves:

(all these phrases are explained in their respective sections, below)

(ii) To do (1) - (5) by using a new way of identifying subjects across outcomes, i.e., saying who counts as the same subject for moral decision-making purposes in different possible worlds.

I. We ought to pick the outcome in which the sum of harm to subjects in that world is minimized.

II. Harm is done to a subject in a world if and only if she exists in that world and her welfare there is lower than her welfare in an alternate world.

III. In worlds where a subject doesn’t exist, we treat her welfare as if it is equal to 0 (but again, she cannot be harmed in that world).

A note I wrote in the course of reading the paper:

This intuition feels more compelling when we don't imagine Amy and Bob are the only (possible) people in the world. Instead, say they're your possible children, but otherwise the world is populated just about the way it is in reality. Many people have the intuition that whereas you have at least some moral reason not to bring about world 1 ("poor bob!"), you have no moral reason to bring about world 2 ("It's not morally good to bring people into existence -- we shouldn't commend people for having kids."). The combination of these intuitions is the ‘procreation asymmetry’, i.e., the intuition that you ought not bring people with negative wellbeing into existence, but you have no moral reason to bring people with positive wellbeing into existence.

I should also note that although Meacham says the idea that you should bring about World 2 rather than World 1 all else equal is the 'central illustration', it is not necessarily the main motivation for the view. That may be, e.g., avoiding the repugnant conclusion.

The non-identity problem for HMV

HMV as it stands has a problem: it says these worlds are equally good (neither contains any harm); but we the right-hand world is better.

This is the 'non-identity problem', which afflicts many person-affecting views.

In short: we say that child(1) and child(2) are "counterparts" of each other, i.e., count for the purposes of moral reasoning about this case as the same subject.

With respect to a particular choice that would result in either some worlds 1 or 2, the counterpart relation for subjects in those worlds is such that:

Note the absence of conditions of symmetry and transitivity.

Any relation that satisfies (1)-(4) is a ‘saturating counterpart relation’, and will satisfy our intuition in the non-identity problem. The mothers in the above situation are counterparts because they are qualitatively identical before the relevant choice. The children who end up being born in each world are counterparts basically because of condition (3).

The 'repugnant conclusion' is the idea that a world in which there is a large number of very happy people is a worse world than one in which there is a much larger number of people just above subsistence level (i.e., whose lives are 'barely worth living'). Totalist' views imply the repugnant conclusion, because they simply 'total up' the welfare of everyone in each world; add enough people with lives barely worth living to one of the worlds and it will be able to surpass the other. This is one of the main things many people don't like about totalist views.

HMV avoids the repugnant conclusion proper by itself, but only by saying that neither the world with a large number of very happy people nor the world with tons more barely subsisting people does any harm; thus bringing about either is permissible. The anti-repugnant-conclusion intuition many people have is that one should bring about the former.

The less well-known 'absurd conclusion' is that there would be a moral difference between two worlds with the same distributions of wellbeing across the same number of people, but in which the subjects live concurrently instead of consecutively. (This may be a problem for various views, though I'm not familiar enough with the literature to say which).

Meacham’s view avoids this conclusion, since (3) requires that each subject in one world gets mapped to one in the other (they have the same number), and (4) requires that they get mapped to subjects with the same well-being, since otherwise there will be another mapping that will minimize the harm of each option. HMV + a saturating counterpart relation thus says these worlds are equally valuable, giving the intuitively right result.

The independence of irrelevant alternatives? 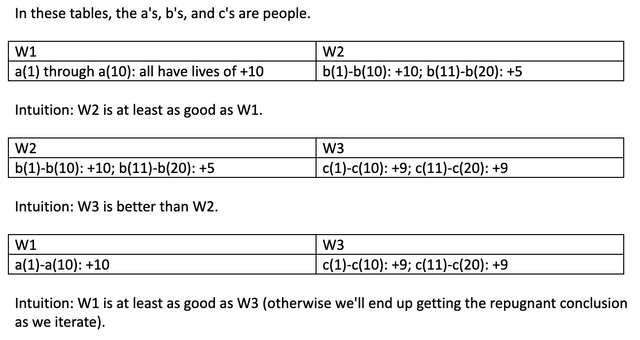 How does Meacham’s view help?

However, when all three options are available in a single choice situation, Meacham’s view resolves the paradox (exactly by violating ‘independence of irrelevant alternatives’).

Meacham’s view says that in this choice situation, W2 does 40 units of harm and W3 does 10, while W1 does none. Thus we should bring about W1.

In other words, we block the inference from

in the argument for the paradox, because we say that it matters what other choices you have available to you when you’re comparing options.

So Meacham’s view requires the violation of the independence of irrelevant alternatives, but in a plausible-seeming way – it says that in moral contexts sometimes it does matter what kind of choice situation you’re in, i.e., that outcomes can’t be ranked in terms of moral permissibility in a totally situation-independent way.

(I thought this part of the paper was pretty cool.)

Meacham outlines 5 ways someone might reject his view (the fifth is further down):

Meacham spends some time on (4). He asks: does his view imply that it’s better to let humanity go extinct, rather than procreate, since otherwise we’ll inevitably end up creating some unhappy people?

He suggests that our intuitions here are muddled by things like the sense that people have a right to procreate, and that issues with subjective probabilities make this tricky. He also writes:

(I return to this response in my reaction below.)

One more way Meecham points out of rejecting his view:

Meacham’s view says we should bring about W1 because both W2 and W3 cause one unit of harm; but intuitively this is wrong. W2 and W3 also seem at least permissible.

Meacham's response: you just have this intuition because both W2 and W3 would be permissible if considered just against W1 in isolation (in two different choice situations), and his view agrees with that.

This is an interesting and coherent paper, and the view Meacham defends seems relatively sensible to me as these sorts of things go.

I find the rejection of the independence of irrelevant alternatives somewhat compelling in this case, or at least not that bad. I buy the idea that it needn't necessarily be a requirement on moral choices (even if other forms of it make sense as requirements on things like preferences over outcomes). Bringing about W2 in choice situation 2 does seem like it could seem wrong—we might say “If you were gonna do that why didn’t you bring about W3?”—even if, if you’re in choice situation 1, it doesn't. This violation does seem less bad to me than the mere addition paradox, so avoiding the mere addition paradox by sacrificing the independence of irrelevant alternatives seems reasonable. (I do wonder, however, whether Meecham’s view is necessary to get that solution).

That said, I don't buy the view overall.

First of all, some of the aspects of it seem unmotivated to me:

More importantly in my mind, though it's debatable whether this should count as an objection, the view has extremely radical implications.

Despite Meacham's protests that his view doesn't imply that you shouldn't procreate, it obviously does imply that if you could cause the world to stop existing all at once, you probably should. This seems at least as bad to me.

Should we, as members of the 2100 Council of the United Federation of Nuclear Powers, use our combined firepower to bomb like on this planet into nonexistence?

(These are of course silly made up numbers, and they should be read as in-expectation)

The bombed planet world does (20)(6 billion) + (9)(1 billion) = 129 billion units of harm. We get this by matching the 7 billion currently existing people in the first world to the people they’re qualitatively identical with before the time of the decision in the second world and sum the differences in their wellbeing levels between the worlds.

Of course, this should not come as a surprise "gocha" objection—views like Meacham's are designed to care about people being worse off than 0 and not people being better off than 0 when they come into existence. But this conclusion just seems so, so wrong to me.

In reviewing this writeup, Michelle Hutchinson [EA · GW] pointed out another, plausibly even worse problem: you don’t even need the possibility of people having negative welfare for Meacham's view to imply that it could be not just as good but better for us to go extinct.

[Couldn't there be] tonnes of cases where you have the option of a more egalitarian and a less egalitarian future, such that then bringing either future into existence is impermissible (as long as you can somehow prevent future people)?

Note that this will only be the case if, as in the situation discussed in (5), you have >2 options in a single choice situation.

I think Meacham's best response here would be to basically deny that there ever are choice situations like this in the real world, where there are genuinely >2 options. Choices in the real world always look like either doing x or not. And then maybe if you decide not to you can consider doing y. You will never genuinely be faced with a tripartite situation where you can either bring about one of three situations in a single action. This would also allow him to get out of denying the independence of irrelevant alternatives, by saying it is a nonsensical requirement anyway. Though it also seems like it'd undermine his response to the mere addition paradox.