TLDR; The movement behind removing technical and regulatory barriers to supplying enough essential goods and services to everyone* is worth funding. (*This submission is America-centric)

In the past couple decades, the prices of consumer goods have risen with or at a lower rate than inflation, while essential goods and services like healthcare, housing, and food have had their prices go up above inflation. 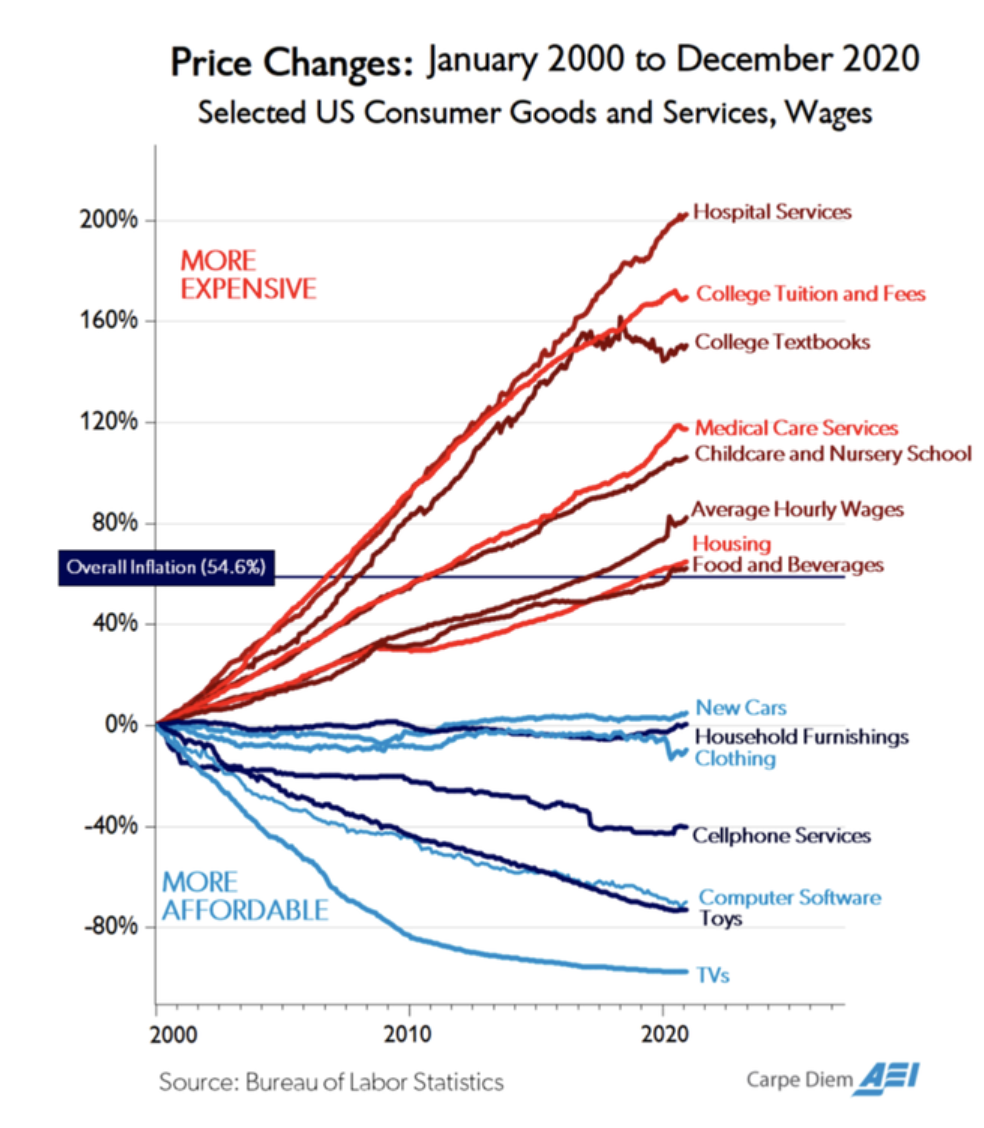 Decreasing affordability of essential goods decreases quality of life. People aren't getting more for these higher prices (think housing and college education) – prices are going up because of restricted supply.

What is the abundance agenda?

First termed in Derek Thompson's A Simple Plan to Solve All of America's Problems, the abundance agenda is about finding ways to increase accessibility of essential goods by increasing supply. This concept has been discussed by other political pundits such as Ezra Klein and Matthew Yglesias as supply-side progressivism, but that's a terrible name for a movement. The abundance agenda is in contrast with typical progressivism, where the government is pressured to provide subsidies to cover the cost of essential goods (e.g. baby formula[1] or housing). Ensuring access to essential goods through subsidies is important and increases productivity and decreases crime.[2] However, subsidizing costs while the supply is restricted leads to cost-disease socialism (termed by Steven M. Teles, Samuel Hammond, and Daniel Takash in their report of the same name), where essential goods become increasingly unaffordable and the root of the problem is never addressed.

Pushing an abundance agenda means working towards a world where everyone expects business and government decisions to prioritize the supply of essential goods and services.

Marks of a successful abundance agenda movement would look like:

Philanthropy-driven movement building is a high risk venture done over decades long time horizons. Done well, it involves spread-betting on a broad variety of strategies, with feedback mechanisms to re-allocate money when necessary even when outcomes are diffuse. Examples of things a philanthropist backing the abundance agenda might fund are:

Why is it important to solve this problem in high-income countries?

Abundance agenda thinking can be applied to any essential good or service that is in short supply, from housing to covid tests to ocean freight. Here are some examples.

As anyone who lives in a big city knows, housing production is artificially constrained by regulations and the supply is overwhelmed by the demand. Limiting the number of people that can live in or near cities where there is a high concentration of job opportunities is not only bad for employees[6] and employers, it's also bad for the GDP. Researchers estimate that American GDP would be 9% higher if housing production were not constrained,[7][8] and that the GDP would be 4% higher (so, almost a trillion dollars) if building regulations were relaxed in just New York City, San Francisco, and San Jose.[9]

The Yes-In-My-BackYard movement has been making great inroads on introducing the idea that we should build more housing to the collective consciousness, based on evidence that this increases housing affordability. When they started in San Francisco, the city was considering an 18 month moratorium on building housing in the popular Mission neighborhood, because of the false belief that building more housing would increase rents. That was 7 years ago, and the movement has grown enough that such a policy isn't politically viable today. YIMBY currently consists of two organizations: YIMBY Law, which sues counties for not following regulations that require them to build more housing, and YIMBY Action, which builds political power for pro-YIMBY government representatives.

There's no doubt that a top tier college allows low-income people to achieve higher incomes. However, admissions to top tier colleges has been shrinking as a proportion of total admissions, and the admission of low-income students is on a downward trend.[10] Applying an abundance agenda to secondary education would mean finding ways of incentivizing more admissions capacity in elite colleges, as well as increasing the quality and decreasing the price of secondary education generally. This could include increasing the prevalence and availability of vocational education.

Leaps in human progress are associated with energy abundance.[11] An abundance agenda applied to energy means more energy, especially clean energy. As it stands, the USA has closed more nuclear power plants than it's opened this century,[12] and new clean energy production facilities often get mired down by environmental reviews,[13] while oil and gas drilling is mostly exempt.[14]

The US is famous for having the most expensive healthcare, while providing a low ratio of value per dollar compared to other high income countries. There are many reasons why, and here are a few examples related to the abundance agenda

In 1910, the first Group Purchase Organization was formed to buy hospital supplies in New York. At the time, these worked like cooperatives, where hospitals could team up to leverage greater buying power to get better prices. In 1987, a law was passed that allowed GPOs to be exempt from anti-kickback regulations. The logic was that hospital supplies could be cheaper if manufacturers paid the administrative fees of the GPO instead of hospitals. After the law passed, GPOs merged and morphed from many smaller cooperatives into an oligopoly.[16] This market concentration leads to more market concentration, where GPOs contract with big manufacturers, and it's hard for new products and new companies to break in, even if they have something innovative. A famous case emerged in the 90s where a syringe manufacturer bribed a GPO a million dollars to prevent a safer retractable syringe from entering the market (there's a movie adaptation of this story starring Chris Evans). Market concentration of suppliers also contributes to, for example, uncomfortable hospital beds. The manufacturer with the biggest share of hospital beds was sued in 1995, 2006, and 2015 for being anti-competitive. The world is likely missing out on significant medical supply innovation due to the American medical supply buying monopoly.

The FDA published a report last year about how monopolistic medical supply buyers contribute to shortages of generic drugs, by forcing prices down and reducing incentive to manufacture.

Shipping companies are organized into 3 alliances, which control nearly 90% of the world's transportation. When shipping patterns changed markedly during COVID and caused shortages, there wasn't much incentive to increase supply. Prices skyrocketed while service deteriorated. (Vox has a nice explainer including a bit on Biden's efforts to control this.)

Compared to moving within the United States, immigration from another country has even greater potential to increase income and social class for the immigrant, as well as increase innovation and productivity for the country through imported talent. Currently immigration is heavily restricted by regulatory quotas. One common criticism of increasing immigration is the idea that it might depress native workers' wages. This isn't true whether the immigrants are highly skilled[17] or not. Matthew Yglesias writes in One Billion Americans that Florida became the subject of an unintentional mass low-skilled immigration experiment when Fidel Castro suddenly allowed Cubans to leave (back then, the USA accepted anyone fleeing from Cuba). During a 6 month period 125,000 Cubans left port Mariel and arrived in Florida. This large influx of low-skilled labor (a 7-8% increase) caused a lot of stress to city infrastructure, but no decrease in the wages of natives.[18] Matthew Yglesias talks about how this is because increasing the number of immigrants increases the quality and variety of goods and services available, instead of competing for native workers' jobs. Furthermore, adding low skilled labor can increase the supply of higher skilled labor by increasing the economic productivity of college-educated moms, through the increased availability of hired help.

Philanthropy-driven movement building is the process by which rich people strategically change public opinion and policy. Some famous examples you may have heard of are the John M. Olin Foundation, and more recently, the Koch brothers. These philanthropists are motivated to movement-build to increase public acceptance of their conservative worldview that government shouldn't mess with business through regulations (for example environmental or anti-monopoly regulations), and that taxes should be decreased, including decreased government-funded social welfare.

By disbursing 370M over fifty-two years, the John M. Olin Foundation nurtured the law and economics movement, grew the Federalist Society, and funded "scholars, think tanks, publications, and other organizations" that "shaped the direction and aided the growth of the modern conservative movement that first sprang into visibility in the 1980s." (see https://en.wikipedia.org/wiki/John_M._Olin_Foundation)

measured in terms of the penetration of its adherents in the legal academy, law and economics is the most successful intellectual movement in the law of the past thirty years, having rapidly moved from insurgency to hegemony. – The Rise of the Conservative Legal Movement by Steven M Teles[19]

As the organizations the foundation seeded grew into institutions, they were able to counter the liberal professional establishment, and made the government much more conservative than it was before. The movement normalized the idea of considering economic implications (with a free-market conservative bent) wherever law was practiced. The John M. Olin foundation ran for one generation to prevent its values from shifting, and closed shop in 2005.

This type of movement-building has real world effects. With less anti-monopoly regulation, general progress or innovation is made more difficult, and sometimes even regresses. And the movement grows on: In 2010, the Supreme Court removed limits on corporate and personal lobbying, giving rich people and business interests even more outsized influence over the government than members of the general public.

There are many altruists doing direct work on building a movement for a particular cause area, but I don't know of any altruistic funder who has successfully built the kind of movement that shifts public opinion and policy. Historically, conservative think tanks have enjoyed much more funding than left-leaning organizations.[20] Though the funding gap has been closing in the two decades, left-leaning funders tend to focus their efforts on elections and issue-specific activism rather than long term movement building.[21] Altruistic funders with a ton of money need to learn the high-risk, difficult-to-measure art of strategic movement-building. By only focusing on helping people in measurable ways, we miss the big picture. Profit-protection interests are continually building their own movements to reduce direct and indirect government support to generate more and more people unable to help themselves.

The abundance agenda is the most viable movement

The ideal movement to build would have:

For point 1, I've already laid out the impact that this movement would have. For point 2, I think that "accessible essential goods" is something that the public is generally down for. The biggest risk for the abundance agenda is point 3, that it would be associated with one party and rejected by the other. But as movements go, this one is probably doing the best, with support at different angles from Ezra Klein (definitely progressive), Matthew Yglesias and Derek Thompson (kinda centrist?) and the Niskanen Center (a center-right think tank).

A comprehensive commitment and strategy to building widespread public and political support for the abundance agenda would complement OpenPhil's current focus areas.

Reasons Open Philanthropy might not want to fund the abundance agenda