This update covers CEA's work in the second quarter of 2021.

CEA brings people together to discuss how we can help others as effectively as possible.

You can find more details for each program further down in the update.

We handled 60+ cases, including some important media cases.

We made four full-time hires:

These updates focus on the object-level progress of our front-facing programs. Hiring, personnel, and operations are covered in detail in the next section.

We help EA group organizers by advising them, providing resources they can use, and creating online spaces where they can share resources and support each other.

We maintained our broad support for group leaders and started adding some team capacity.

We hired a new CBG Programme Manager, made 6 grants, and piloted activities to improve the CBG university pipeline.

543 people started a fellowship in Q2, which is about half as many people as in Q1, mostly because groups normally start their fellowships in Q1.

All data is based on the number of people who started a fellowship in the listed quarter. Fellowships last for 8-10 weeks. The average completion rate in Q1 was ~81%. 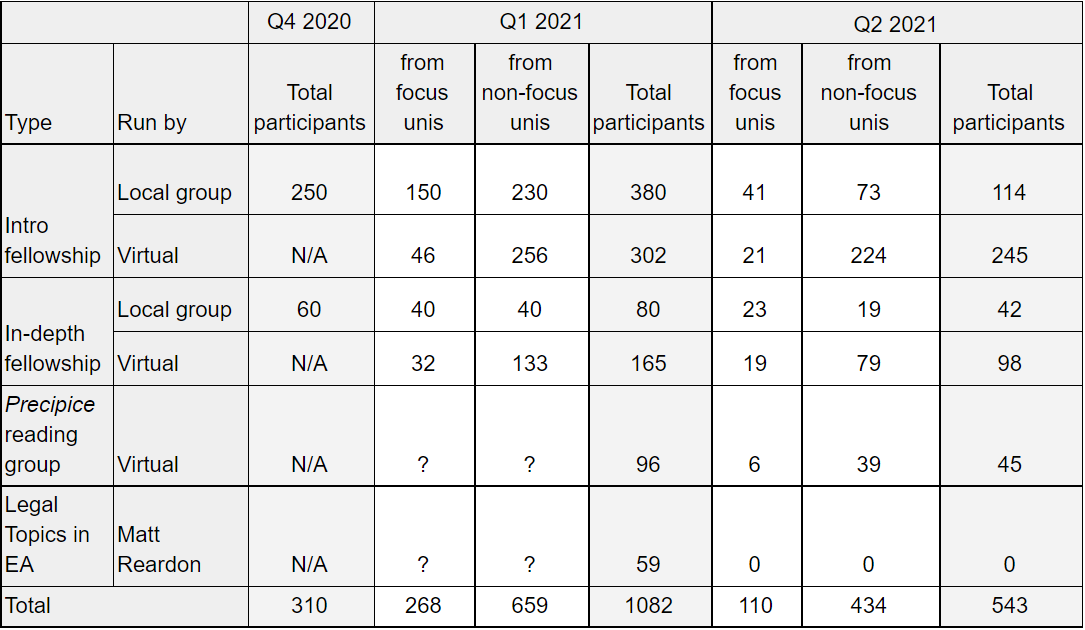 Notes on this data:

Other notes on the fellowship programs:

The Community Health team aims to preserve paths to value and mitigate key risks to the future of the EA community. Our work includes fostering a healthy culture, improving diversity, mitigating harm done by risky actors, protecting the brands of EA and longtermism, and identifying risks to early field-building.

Hiring was the team’s major focus for this quarter. Because community health work requires an unusual combination of skills, we expect to take hiring slowly and leave these positions open for much of this year rather than definitely making a hire. We listed 4 roles as ‘expressions of interest’ and expect to hire 0-2 new staff to the team for those roles. The open roles are:

Examples of different types of cases from this quarter:

Given low capacity on the team this quarter, we’ve mostly prioritized epistemics and DEI.

Going forward, the team plans to focus more effort on making high-quality connections rather than curating content We chose to focus on this metric because connections have generally been the source of our strongest case studies, responsible for most of the impact recorded in a survey of highly involved EAs, and the main thing that attendees report to be their most valuable experience at our events.

We still need to figure out exactly how we’ll measure this, but we’re broadly looking for connections that were positive for both people involved, and were useful for at least one of the parties. The paradigmatic example would be connecting a junior person to someone more senior who can give them advice, mentorship, and/or further connections. However, we think that peer-to-peer connections (between people with similar levels of experience) might also be useful.

This means that developing the stewardship program is likely to be a key focus in the future. We might have a smaller selection of high-quality talks at future events (to structure the event, and convey key messages).

Here’s information on how many connections we estimate were made through our events from 2019 through 2021. A proxy for this metric is the number of estimated total new connections:[4]

The 2021 figures do not include figures from EA Global: London, which is scheduled for later in the year. However, we think we’ll likely need to add more programming or expand events (e.g. by adding a virtual element to EA Global London) to match last year’s level. The main reason we’re falling short is that we had to turn EA Global: San Francisco into the smaller EA Picnic because of COVID, and because most of the planned EAGx events have been delayed until 2022.

We are in the process of assessing candidates for the Events Generalist role and the Community Events Manager role.

The EAGx online training aims to increase the confidence and connectedness of EAGx organizers.

As expected, the overall feedback for online training was not as good as the feedback for in-person training in 2020, but was still pretty good.

9 attendees filled in the survey after the training:

Much of this quarter was spent planning the EA Picnic (July 11th), our first in-person event since the beginning of COVID.

This event focused on increasing the numbers of connections between highly-engaged community members:

We are planning to run the EA Coordination Forum for 40-60 attendees in Napa (California) on September 27-30. We also hope to be able to hold EA Global: London in person on October 29-31.

Amy is now being managed directly by me (Max).

The Effective Altruism Forum (EA Forum) aims to be the central place for collaborative discussion about how to do the most good.

The Operations team aims to provide the financial, legal, administrative, grantmaking, logistical, and fundraising support that enables CEA, 80,000 Hours, Forethought, and Giving What We Can to run efficiently.

We set key proxy metrics for each department. In most cases, we were already tracking these metrics, but we were also tracking other metrics/factors. We’re now more focused on these metrics.

The Community Health team isn’t using a key proxy metric at the moment.

We plan to supplement these metrics (which are Goodhart-able and don’t capture all of the paths to value) with annual objectives focused on supplementary/qualitative/quality-focused targets. For instance, groups might have an objective about improving the quality of In-Depth fellowships or providing extra training for grant recipients.

We are also running a hiring round for an EA Strategy Coordinator. We had a work trial with one candidate who declined our offer, and we are now close to beginning further work trials.

Previously, we’d been thinking about ourselves as an Oxford-based company with remote staff. We now think of ourselves as a remote organization with a hub in Oxford. We think that this will allow us to support remote staff more effectively, and attract remote talent.

Harri Besceli has been carrying out hiring support for the two open Groups positions during Q2. In Q3 he will hand over CBG responsibilities to Rob Gledhill (new hire), and try out other roles at CEA (most likely as a research assistant to Max). If those roles aren’t a good fit, he’ll leave CEA.

We hired four staff this quarter, thanks largely to the efforts of the hiring managers (Joan, Ben, Josh).

We also brought on some new contractors, including:

I’m hopeful that we can hire around 5 people in Q3.

We’re in the process of finishing recruitment rounds for the following positions (none of which are still open to applicants):

We’re also trying to expand the community health team by running expressions of interest for the following roles:

Sky Mayhew (Community Health) will move from being a core team staff member to working as a part-time consultant.