This update covers CEA's work in the first quarter of 2021.

Our mission is to build a community of students and professionals acting on EA principles, by creating and sustaining high-quality discussion spaces.

In 2019, we focused on stabilizing the organization and improving execution. In 2020, we clarified and narrowed our scope (by setting strategy and spinning off Funds and GWWC).

In 2021, we are focused on working towards our annual goals, as well as growing our team.

These are brief summaries; you can find more details for each program further down in this post.

In Q1 we opened two rounds, for a finance lead and a full-stack engineer. We also began to redraft our careers page and made some improvements to our hiring process. We’re on track to open more rounds in Q2.

We help local group organizers by advising them, providing resources, and creating online spaces where they can share resources and support each other.

We’re testing out providing additional support for specific populations within EA to see if we can foster better growth and retention there.

Much of our work with groups happens in collaboration with group leaders, and some of this impact should be attributed to them.

You can find more details about this work in the appendix [EA · GW].

The Effective Altruism Forum (EA Forum) aims to be the central place for discussion about how to do the most good.

Technical progress has been slower than expected. We are in the process of hiring another developer. (The application period is over; we are currently conducting interviews.) 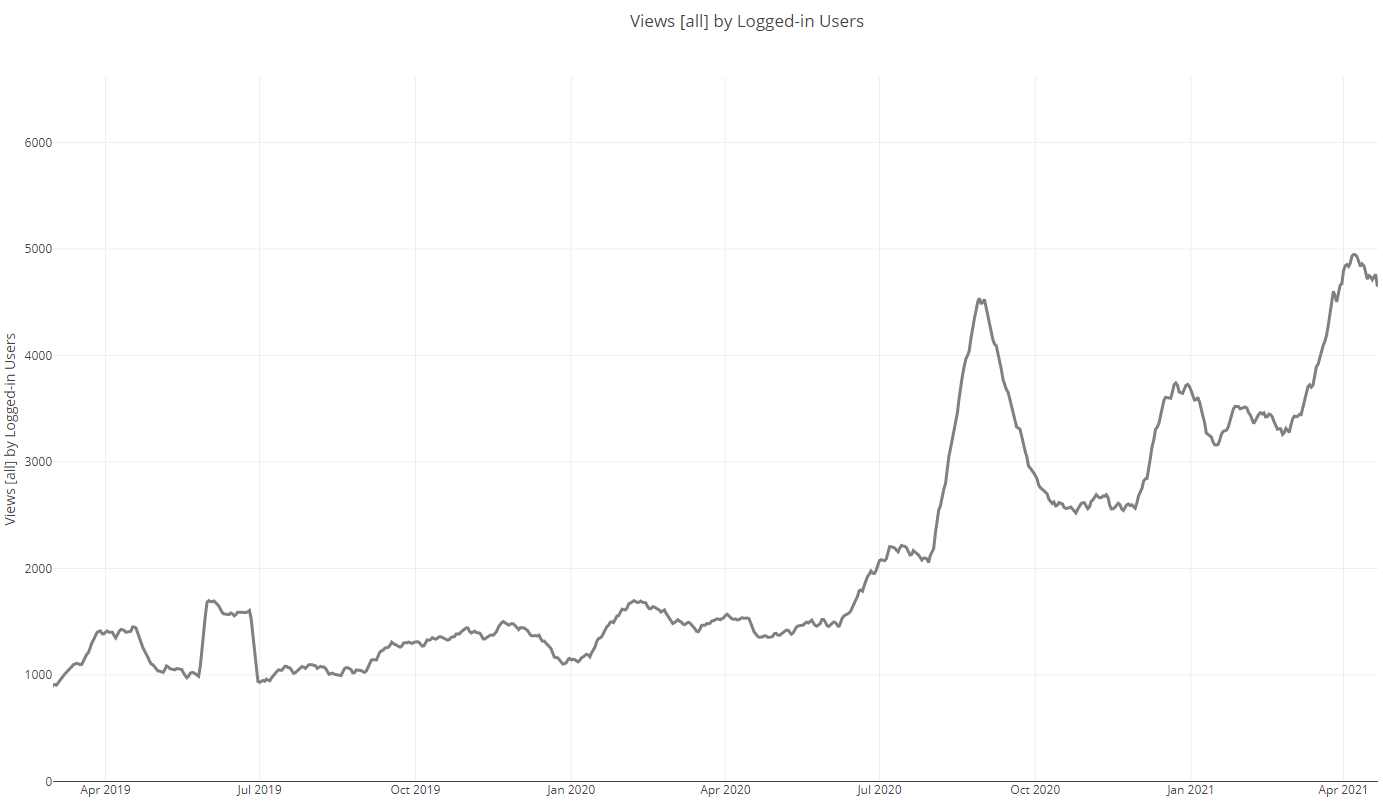 This shows the number of views on the EA Forum by logged-in users. Each day's data point represents the average of the previous 30 days. We believe the spike in mid-2020 was largely the result of an issue where bots created false accounts before we made a technical fix. 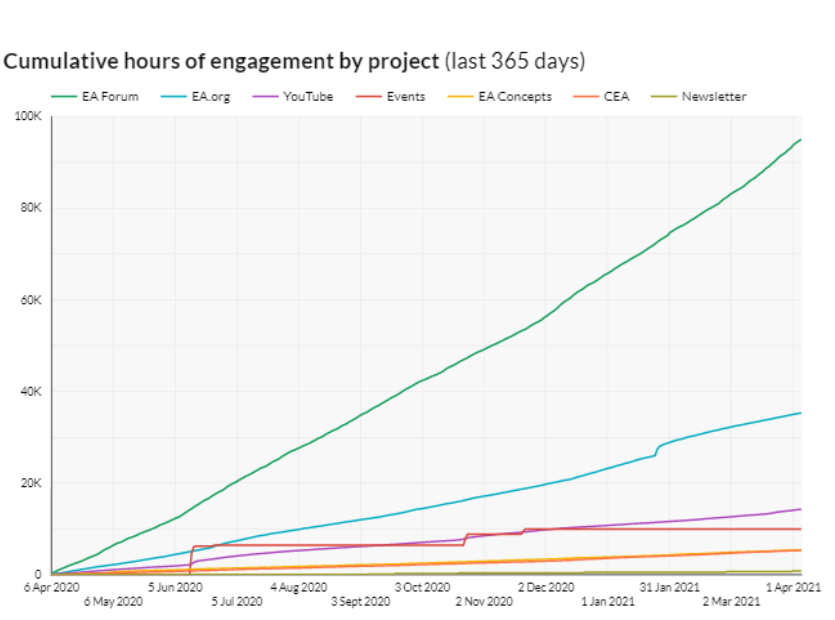 This shows engagement for a variety of content projects over the last year.

This quarter was spent planning and executing EA Global: Reconnect. This event was focused on increasing the numbers of connections between highly-engaged community members. We have not yet deeply analyzed the data, so we are sharing our initial impressions.

We did not hit the majority of the goals we set for the event, and we’re a bit disappointed in the outcomes, although we still think it was worth doing. We’ll reflect on this over the next month. While we’ve learned a lot about virtual events this year, we hope this will be one of the last events in which “Zoom fatigue” will be a major factor.

The Community Health team aims to preserve paths to value and mitigate key risks to the future of the EA community. Our work includes fostering a healthy culture, improving diversity, mitigating harm done by risky actors, reducing the harm of negative PR, and identifying risks to early field-building.

Examples of different cases from this quarter: 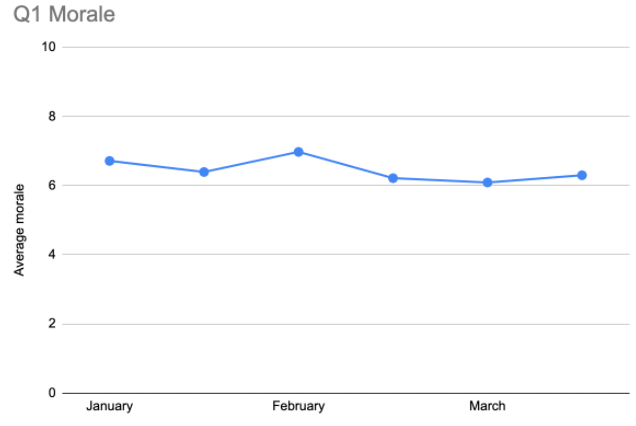 Average morale in Q1 was 6.45/10, which represents a slight drop from the previous quarter (6.61). Some of this may be due to a change in how we’re capturing this morale data, as we’ve shifted from using 15Five to using a weekly Slack poll.

Louis Dixon (finance lead) decided to leave to pursue study in computer science. We’re grateful that he gave us ample notice, and optimistic about finding a solid replacement.

We’ve seen a gap between students completing an Introductory Fellowship and actually taking significant actions based on EA principles. As a result, we’ve supported / run the following activities:

We continued to provide funding for group events and initiatives, at a similar level to last year. 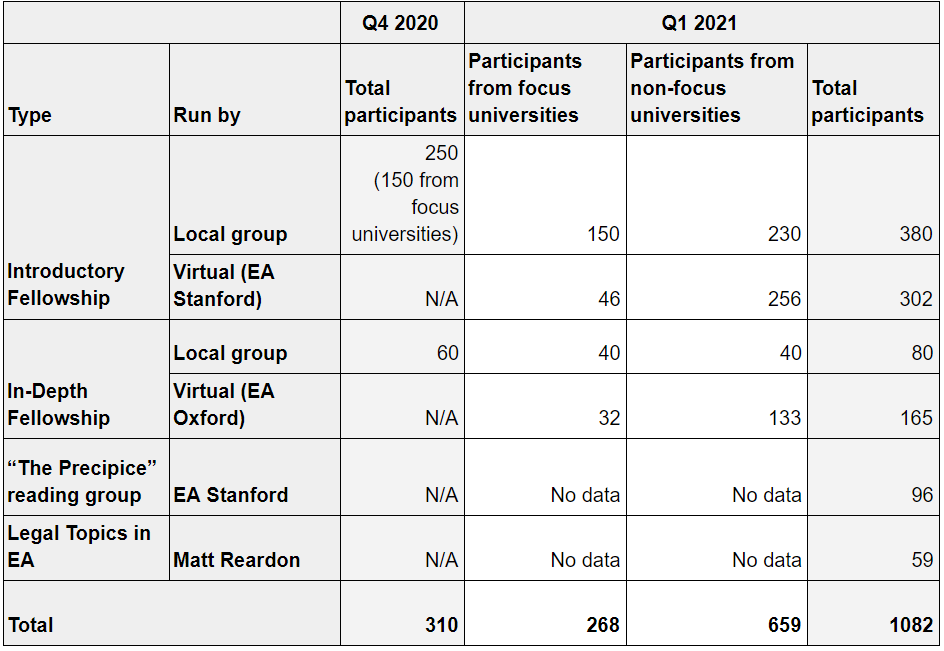 Our main priority for this quarter was evaluating renewal applications for funding. Harri has decided to transition out of his role as Community Building Grants specialist. Over the next quarter, he will be exploring other possible roles at CEA and externally, and will continue to maintain the program until we hire additional team members.

We previously expected to reopen new applications for funding in January. We decided against this due to low capacity. We made a mistake in not communicating our timeline for deciding whether to re-open applications before the decision had been made. We have now made a public commitment to provide an update about our plans by June 1st, in advance of the June 13th EA Infrastructure Fund round.

Categories of cases (some of which fit into more than one category):