This overlooks, or at least fails to make explicit, two important complexities. Firstly, a person may view two entities as both being worthy of some moral concern, but not the same amount of moral concern. This could be due to perceived differences in the entities’ capacities for welfare, moral status, or probability of moral standing.

Secondly, there are many distinct dimensions along which moral circles can expand, such as genetic difference, geographical distance, and distance in time. A person’s moral circle may be “larger” than another person’s in one dimension, yet smaller in another. For example, one person may care about all animals in the present but few beings in the future, while another cares about humans across all time but no nonhuman animals.

This post expands on these complexities, and shows how they can be captured visually. It mirrors or draws on many ideas from prior sources related to moral circles and their expansion [EA · GW].

I hope this post can facilitate better thought about, discussion of, and visualisation of moral circles and related matters. That, in turn, should be useful for reasons including the following:

The classic view of moral circles

The circle of altruism has broadened from the family and tribe to the nation and race, and we are beginning to recognize that our obligations extend to all human beings. The process should not stop there. [...] The only justifiable stopping place for the expansion of altruism is the point at which all whose welfare can be affected by our actions are included within the circle of altruism.

These moral circles are classically visualised roughly as follows (source): 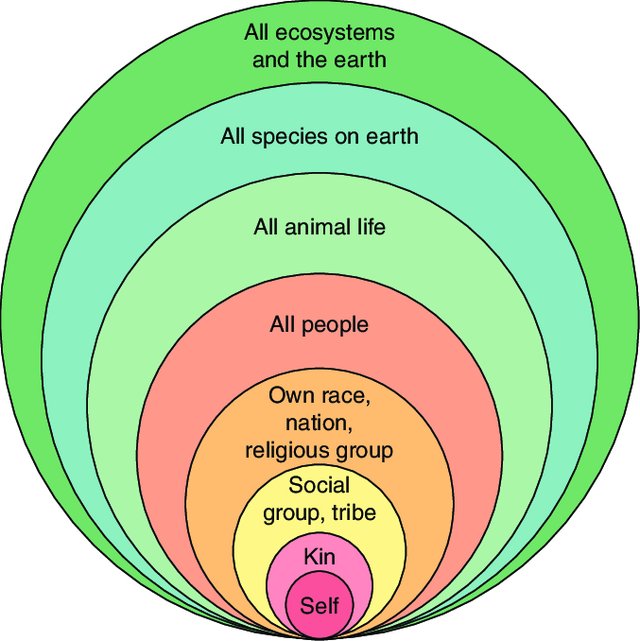 (Note that different visualisations differ in which entities they show and what “order” they show these entities in.)

This may suggest that Alice believes, or will act as if, only herself and her kin are moral patients - in other words, as if they’re the only entities who have moral standing; who have “intrinsic moral worth” [EA · GW]. Meanwhile, Bob may believe, or act as if, all animals have moral standing. (That said, Alice and Bob may not think in these terms, and there may be inconsistencies between their actions and their beliefs.)

Moral concern can differ by degree

“Moral concern” can span from believing an entity’s rights and well-being take precedence over all other considerations, to a perception that their needs and rights are worthy of limited consideration without being a primary concern.

Discussions of moral circles could either be just about whether an entity is perceived as warranting moral concern, or also about how much concern an entity is perceived as warranting. It seems valuable to explicitly state which of these conceptualisations one is using, to avoid confusion (see also Moss [EA · GW]). It also seems most valuable to use the latter conceptualisation, given that it does seem people very often think in terms of degrees of moral concern, rather than just binary distinctions.

There are three things that may justify a person having more concern for one entity than another:

Of course, people will rarely use these precise terms in their own thinking. Furthermore, many people will probably never think explicitly about how much moral concern they have for various entities, or about what factors have influenced that.

Whatever the reason for differences in degree of moral concern granted to different entities, we can visualise such differences using circles of different colours (or different opacity). For example, let’s say that Carla: 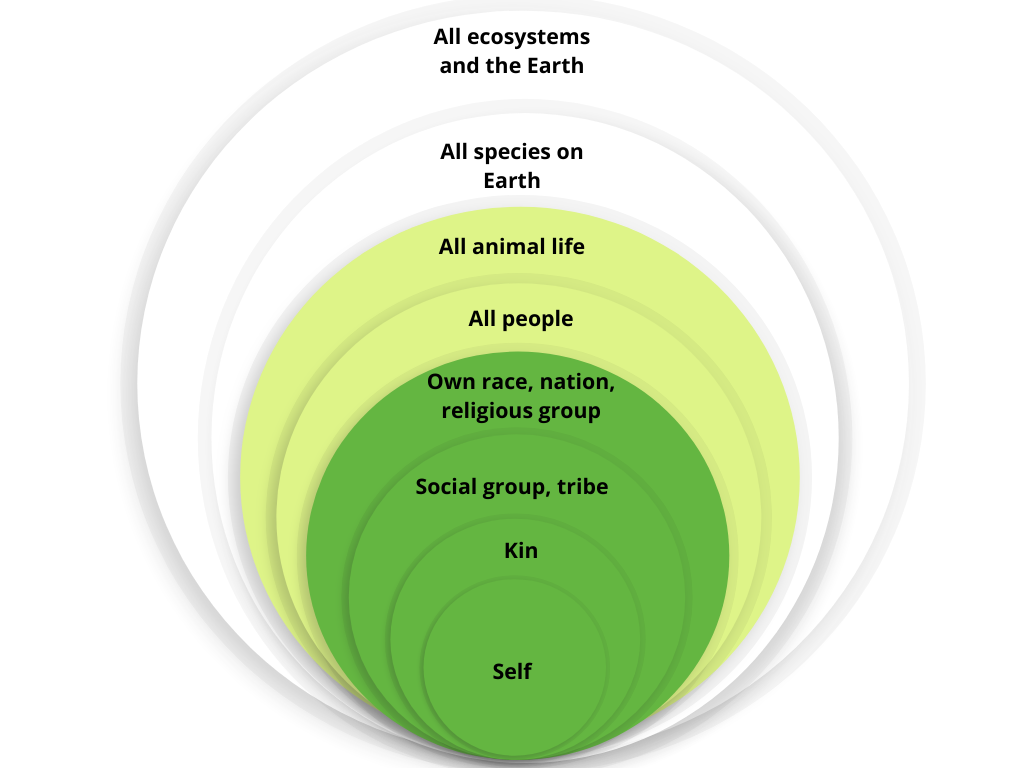 If we wished, we could also represent things more continuously, by using gradual shifts in shading or opacity, or by adapting the “heat map” approach used in Figure 5 of this paper.

From a certain perspective, one could view effective altruism as a social movement aimed at getting society to care more about groups that it currently undervalues morally. These groups include:

The author relates this to discussion of moral circle expansion (MCE), and writes:

When I've thought about the moral circle naively, I've imagined a coordinate system with

"Me" at the origin

People I know represented as points scattered around nearby

where the "distance from the origin" of a mind simply represents 'how different' it is compared to mine, and consequently [how difficult] it is to empathize/sympathize with it. And under this view, I've conceived of moral circle expansion (MCE) as merely the normative goal of growing a circle centered around the origin much like inflating a balloon.

But the author notes that “the moral circle does not necessarily expand uniformly”, and writes of “The Many Facets of MCE”:

[Groups (1-5)] are "weird" or "far" from our own minds, but they are far in different and often incomparable ways. For EAs, each of these 5 undervalued groups lend themselves to a particular problem of the form "How do we get society to care more about X?".

The author lists various dimensions along which moral circles can expand, and states:

For each of these dimensions, we can try to push the moral circle outward in that dimension. I call this domain-specific MCE.

I’ll now show how we can visualise moral boundaries in multiple dimensions.

And let’s start by visualising the locations of various types of entities in the space formed by those two dimensions. (Of course, this is all purely for illustration; the choice of which types of entities to show was fairly arbitrary, and their locations in this space are approximate and debatable.)[8] 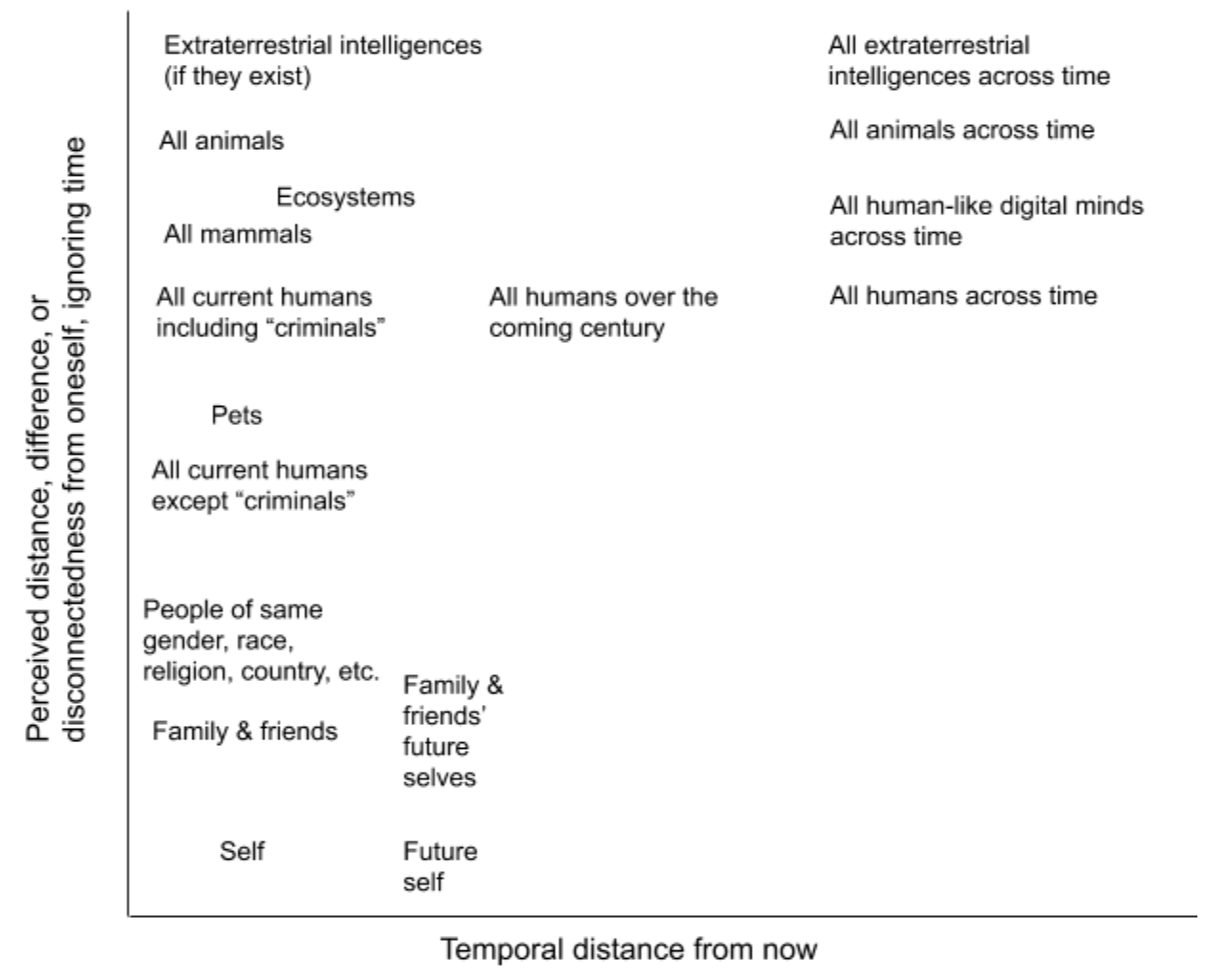 We can then represent not just the size but also the particular shape of a person’s moral boundaries. For example:[9] 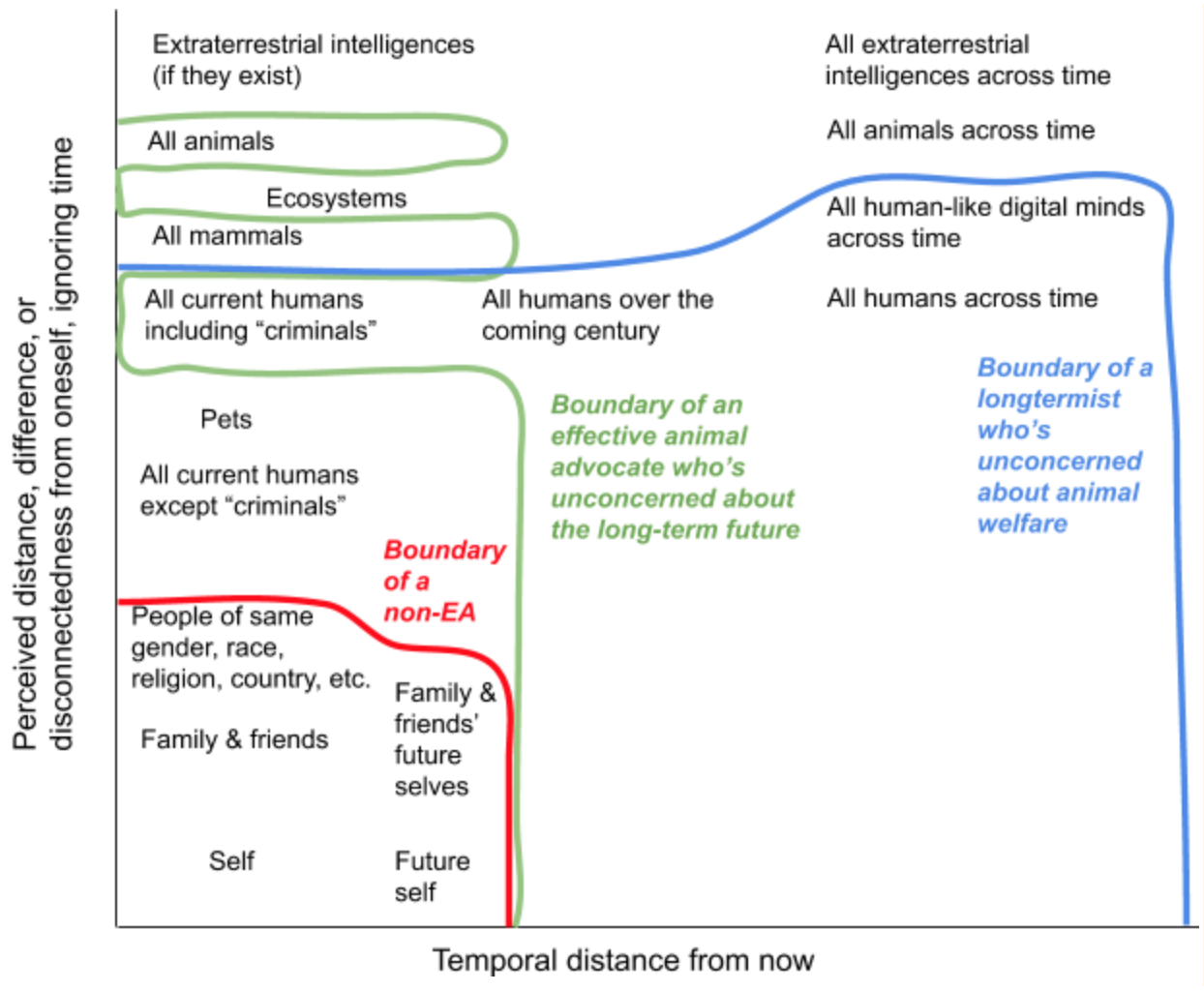 This “skipping” may typically or always result from a graph failing to explicitly represent dimensions that are relevant to a person’s moral boundaries. For example, the “skipping” shown in that hypothetical effective animal advocate’s moral boundaries may result from the EA also caring about an entity’s perceived levels of blameworthiness and sentience, which are dimensions “criminals” and ecosystems (respectively) score worse on than animals do.

It will therefore often be useful to think of moral boundaries as being determined by, expanding along, and/or contracting along more than two dimensions. Beyond three dimensions, this can’t be easily visualised, but it can still be loosely imagined.[12] We can think of moral boundaries as n-dimensional shapes existing in n-dimensional space, where “n” is however many dimensions one chooses to consider as relevant. And we can imagine an n-dimensional function that takes an entity’s “score” on each dimension as input, and outputs either whether that entity is worthy of concern, how much concern the entity is worthy of, or how likely that entity is to be worthy of (varying levels of) concern.

Dimensions along which moral boundaries may vary, expand, and contract

There are a vast array of dimensions that (a) entities vary along, and (b) could conceivably or in practice be relevant to whether that entity is given moral concern by various people. Which dimensions are relevant to whether an entity is given moral concern, and the relative significance of each, is ultimately an empirical question that won’t be addressed in this post. Instead, this post will list a range of dimensions that seem to be plausibly relevant.

Some things worth noting:

With that in mind, here is our current list of plausibly relevant dimensions:

Better conceptualisation, visualisation, and empirical data related to moral circles/boundaries (and their expansion) could help in various efforts to improve the world. For example, this may help in identifying more neglected populations, in spreading longtermism [EA · GW] and thereby increasing the resources dedicated to existential risk [EA · GW] reduction, or in understanding human values for the purposes of AI alignment. To that end, this post:

There are of course many questions related to moral boundaries that this post did not explore. Each of these questions have been partially addressed by at least some prior work (such as these works [EA · GW]), though they seem likely to still be fruitful avenues for further work.

My thanks to Justin Shovelain [EA · GW], Jason Schukraft, Jamie Harris, Clare Harris, John Welford, and Linh Chi Nguyen for comments and suggestions on earlier drafts of this post, and to Courtney Henry and Grue_Slinky for discussions that helped inform the post. This does not imply these people’s endorsement of all of this post’s claims.