Which nuclear wars should worry us most?

This is the first post in Rethink Priorities’ series on nuclear risks. In this post, I look into which plausible nuclear exchange scenarios should worry us most, ranking them based on their potential to cause harm. In the second post [EA · GW], I explore the make-up and survivability of the US and Russian nuclear arsenals. In the third post [EA · GW], I estimate the number of people that would die as a direct result of a nuclear exchange between NATO states and Russia. In the fourth post [EA · GW], I estimate the severity of the nuclear famine we might expect to result from a NATO-Russia nuclear war. In the fifth post [EA · GW], I get a rough sense of the probability of nuclear war by looking at historical evidence, the views of experts, and predictions made by forecasters. Future work will explore scenarios for India and Pakistan, scenarios for China, the contradictory research around nuclear winter, the impact of several nuclear arms control treaties, and the case for and against funding particular organizations working on reducing nuclear risks.

Toward a better understanding of nuclear risks

A nuclear exchange may have the potential to kill millions or billions of people, and possibly lead to human extinction. There have been many cases where nuclear weapons have almost been launched by mistake (Baum, de Neufville & Barrett, 2018).[1] And if a nuclear exchange — started by accident or on purpose — were to escalate to a full-scale nuclear war, the nuclear detonations could lead to a nuclear winter, a state where soot launched into the atmosphere blocks out enough sunlight to cause a famine so severe and long-lasting that almost everyone on Earth could starve to death before its end.

Because there seems to be a non-negligible probability of a large-scale nuclear exchange, and because the stakes would be so high in the event that a nuclear exchange did escalate, many effective altruists believe reducing nuclear risks should be among the top priorities for the EA community. For example, 80,000 Hours published a problem profile on nuclear security, giving a score of 15 out of 16 on Scale (though it scores relatively low on Solvability and Neglectedness).[2]

But my sense is that some details of the nuclear risks problem area aren’t well-understood by most EAs — for example, how bad nuclear war would actually be, the mechanisms behind nuclear winter, and where EAs that prioritize reducing nuclear risks should donate. In a number of upcoming posts, I’ll try to understand, in somewhat concrete terms, how much harm nuclear war would cause and how plausible nuclear risks are. One of the things I'll do to better understand the risks posed by nuclear winter is review the implications of recent academic literature that is interpreted by some as casting doubt on the science behind the nuclear winter phenomenon. Finally, I’ll also evaluate some of the work being done to reduce nuclear risks. In particular, I’ll focus on a recent treaty that’s been adopted by the United Nations, the Treaty on the Prohibition of Nuclear Weapons (TPNW), which would make the research and use of nuclear weapons illegal in all countries that ratify the treaty.

Focusing on the most troubling nuclear risks

In the first few posts, I’ll consider the probability and severity of several nuclear war scenarios, looking separately at the amount of harm that would be caused from both the short-termist perspective and the long-termist one.

When I consider these factors for all 9 nuclear weapons possessor states, I get a rough ranking of various plausible nuclear exchange scenarios in terms of their expected dis-value: 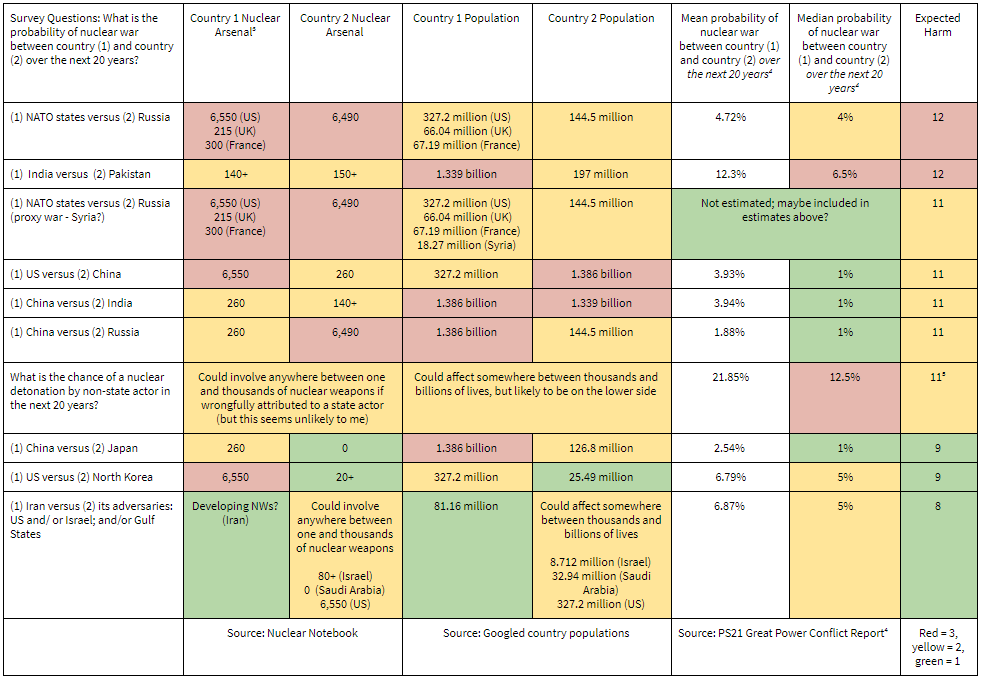 The ranking is based on a crude scoring system that approximates the expected harm that would be caused by each scenario. Each of the factors that informs how terrible a given nuclear exchange would be — the size of the involved countries' nuclear arsenals, the size of the populations of the involved countries, and the probability of the specific scenario — were assigned a score of 1 (shaded in green) , 2 (yellow), or 3 (red), where a factor with a score of 1 should worry us less, and a factor with a score of 3 should worry us a lot. For each scenario, the factor scores were summed together to produce the Expected Harm score.

Note that some endnotes are embedded in the table image but can be seen here: source for arsenal size[3]; source for median war probability[4]; note on non-state actors[5].

Based on this rough prioritization, I’ll spend several posts looking at the amount of harm we would expect to see caused by the following nuclear exchange scenarios:

July 17 2019 — I replaced a simplified version of the table ranking potential conflict scenarios on the basis of nuclear arsenal size, population size, and scenario probability with a more detailed version. I also added a brief explanation of how the Expected Harm scores were calculated.

This essay is a project of Rethink Priorities. It was written by Luisa Rodriguez. Thanks to Peter Hurford, Marinella Capriati, Ida Sprengers, Marcus A. Davis, and Neil Dullaghan for their valuable comments. Thanks also to Matt Gentzel, Seth Baum, and Carl Shulman for providing guidance and feedback on the larger project. If you like our work, please consider subscribing to our newsletter. You can see all our work to date here.

Daniel Ellsberg on the creation of nuclear doomsday machines, the institutional insanity that maintains them, and a practical plan for dismantling them [Audio blog interview]. (2018, September 24). Retrieved April 14, 2019, from https://80000hours.org/podcast/episodes/daniel-ellsberg-doomsday-machines/

McIntyre, P. (2016, April 12). How you can lower the risk of a catastrophic nuclear war. Retrieved from https://80000hours.org/problem-profiles/nuclear-security/

Treaty on the prohibition of nuclear weapons – UNODA. (n.d.). Retrieved May 19, 2019, from https://www.un.org/disarmament/wmd/nuclear/tpnw/