Convergence Analysis researches strategies for existential risk reduction. We’ve previously written a post about what strategy research is and why it’s valuable [EA · GW] (both in the context of x-risks and more generally). That post distinguished between values research, strategy research, tactics research, and implementation, as shown in the following diagram: 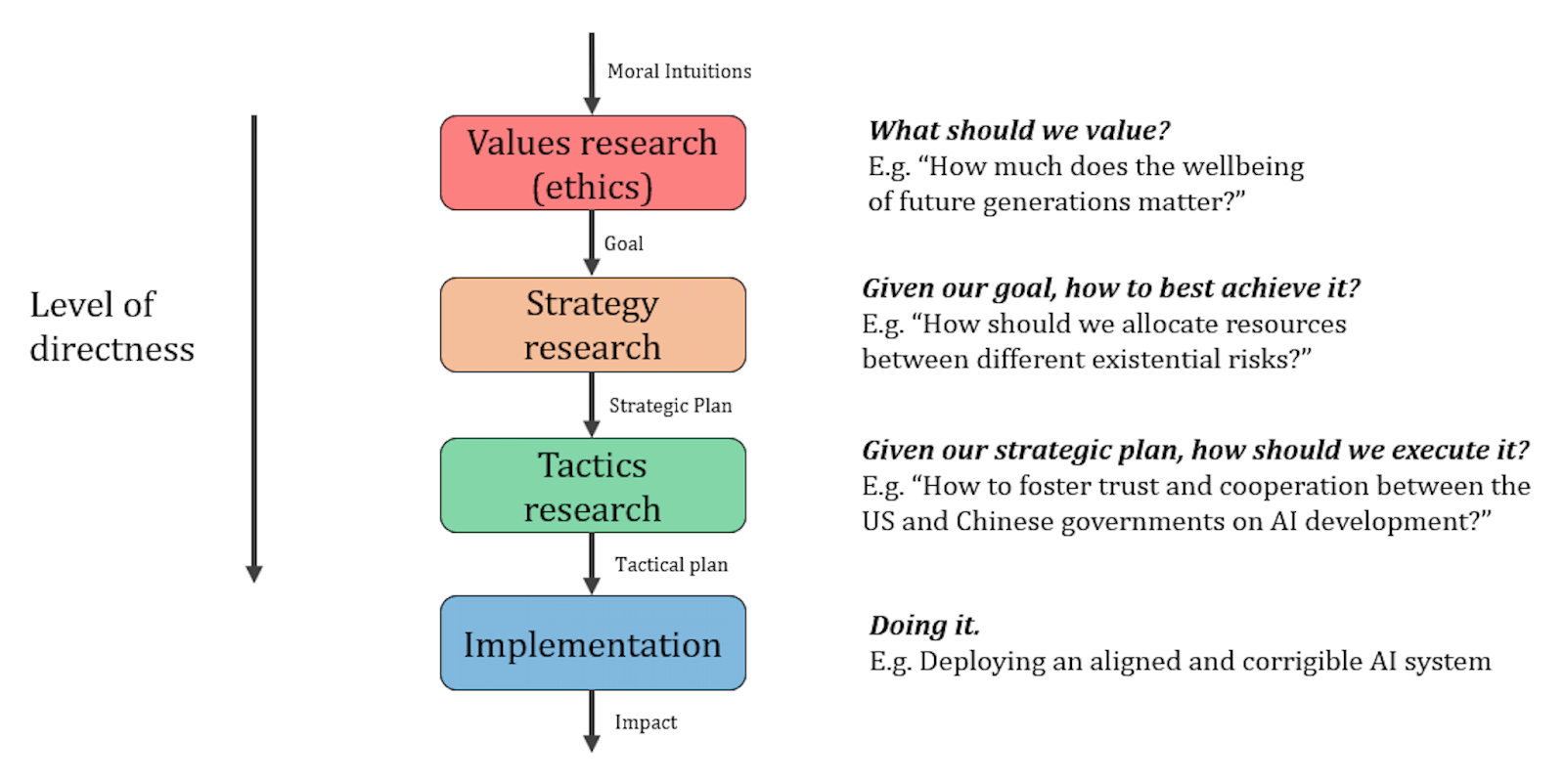 Furthermore, that post provided a definition of strategy research: “High-level research on how to best achieve a high-level goal.” (Strategies themselves will be combinations of specific interventions, coordinated and sequenced in specific ways, and aimed at achieving high-level goals.)

We hope this model can help guide future strategy research and facilitate clearer thinking and discussion on the topic.

One thing to note: To some extent, these components can be seen as stages, typically best approached in the order in which we’ve listed them here. But there will also often be value in jumping back and forth between them, or in some people specialising for a certain component rather than moving through them in order. We discussed similar points in our earlier post [EA · GW] in relation to values research, strategy research, tactics research, and implementation.

Once we’ve formed a high-level goal (through values research [EA · GW], or some other way or resolving value uncertainty [LW · GW]), we must develop strategies to achieve this goal. But initially, we may not even know what actual actions (i.e., interventions) we have to choose from, or what consequences we should be thinking about. It may be as if the space consists entirely of “unknown unknowns”. Thus, we must first map the space, to identify as many options and consequences worth considering as we can.

In the context of x-risk reduction, research questions for mapping the space include:

Only once we have at least some answers to such mapping questions can we proceed to the other components of strategy research (constructing strategies, modelling, and prioritizing). To illustrate this, imagine trying to come up with x-risk reduction strategies before even noticing that outreach to national security policymakers is one intervention you could use, that overly dramatic or simplistic outreach could make it less likely future outreach will be taken seriously, or that misaligned AI is one risk factor worth thinking about.

How does one actually do mapping research? This will likely vary a lot depending on the cause area of interest (e.g., x-risk, animal welfare) and on how much mapping has already occurred. At the very start of mapping, you might ask:

Once at least some options have been identified, you might ask: 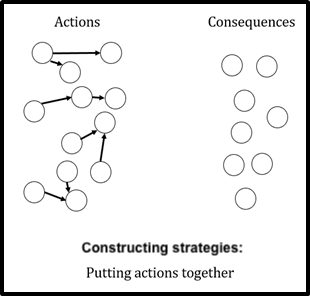 Let’s say we’ve done some mapping, and identified some interventions and consequences worth considering. What now?

We shouldn’t simply pick an intervention and use it. Nor should we even spend too much effort on modelling the effects of (or prioritizing between) these interventions themselves, as if each would be executed in isolation.

This is because it’s likely that we (or the broader community we’re part of) will use multiple interventions, and that there’ll be interactions between their effects, and better vs worse ways to sequence them.

Thus, ideally, we should first construct strategies - i.e., think of specific ways of combining, coordinating, and sequencing interventions - and then model the effects of (and prioritize between) those strategies.

For example, we wouldn’t want to view in isolation the options of “funding biosecurity-related PhDs”, “recruiting senior researchers to do biosecurity research”, and “connecting biosecurity experts with relevant policymakers”. Instead, we might recognise that a combination of these interventions could be more powerful than the sum of its parts, and that the order in which we execute these interventions will also matter. 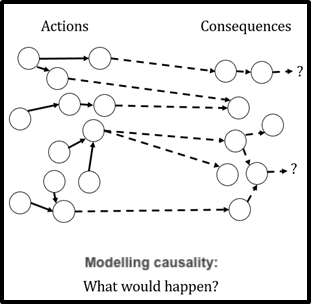 Once we’ve constructed strategies, we should build causal models for them. In other words, once we’ve linked interventions together into packages, we should see how each package might link together with outcomes we care about.

As with all modelling, we want our models to simplify our complex world, help us separate useful lessons from noise, and help us think about how the relevant parts of the world are configured and how they interact. 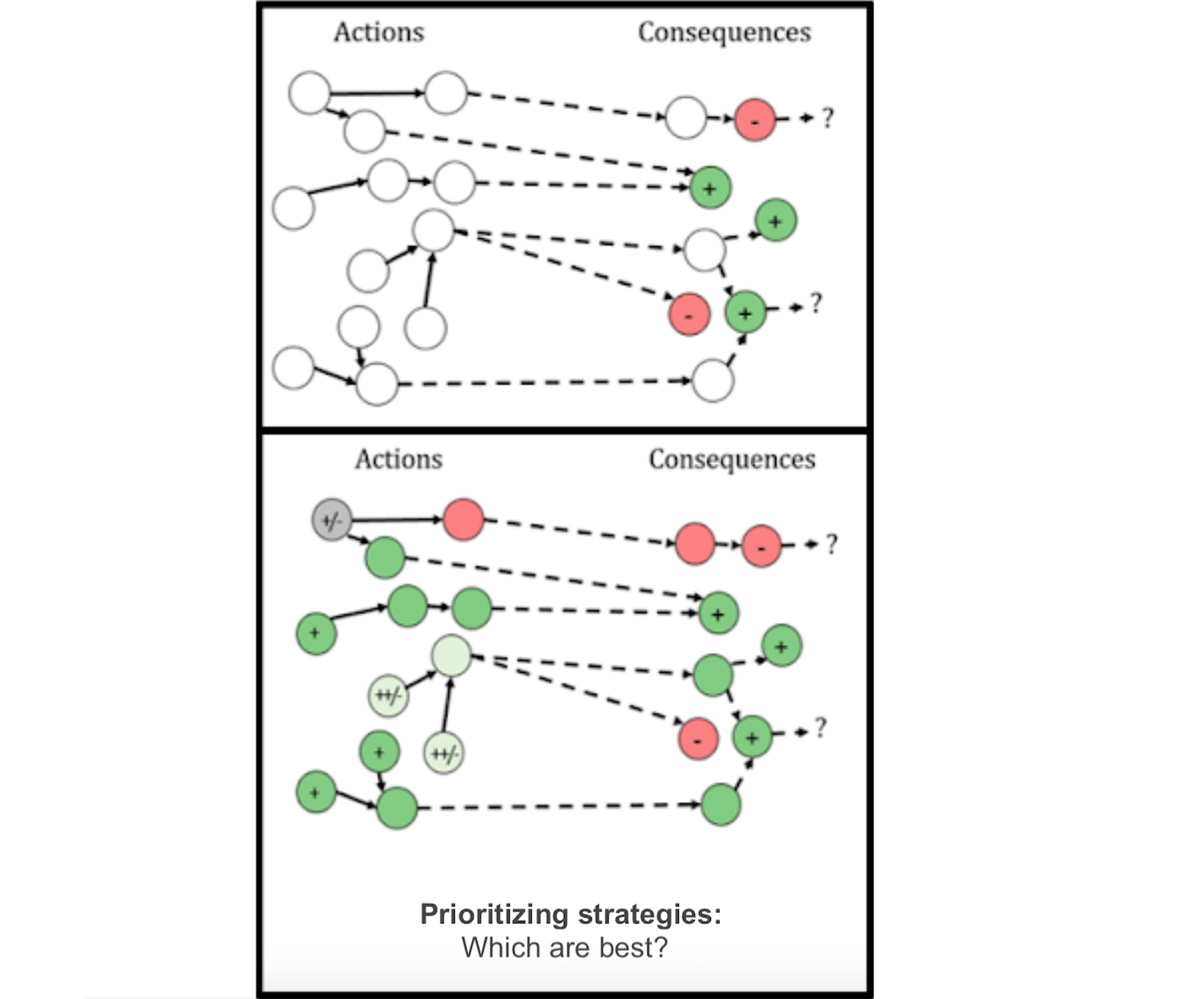 Say we’ve now identified many possible interventions and consequences (mapped the space); identified ways of combining, coordinating, and sequencing these (constructed strategies); and thought about the outcomes each strategy might lead to (modelled causality). We also have ideas about how good or bad those outcomes would be (based on our values or moral views). This will leave us ready to prioritize between these strategies. Such prioritization can be extremely valuable, as it’s likely that the best strategies will be far better than the typical strategies (in a pattern found across many domains, such as startup success or researcher output).

Prioritization, as we use the term here, involves answering questions like:

In this post, we’ve outlined a model of strategy research as composed of four components: mapping the space, constructing strategies, modelling causality, and prioritizing between strategies. We’re sure other models could be generated, and could likely also be helpful. But this is a model that has made our own thinking more clear and effective, and we hope it can do the same for others researching strategies for pressing global problems, and for those aiming to understand or use such research.

This seems fairly intuitive. What is the novelty here?

(My view, not Convergence's)

I think it's very often the sign of a good model or framework that it seems fairly intuitive. Our intuitions often track the truth, but somewhat messily and implicitly. So it's useful to crystallise them into something more explicit and structured, with labels for the different pieces of it, to facilitate clearer thinking and discussion. It would be odd if the result of that crystallisation seemed totally counterintuitive - that might be a sign that a mistake has been made in the process.

Consider, for example, that many of the most valuable economic models/theories seem to some extent very obvious (e.g., the ideas that buyers buy more when things are cheaper, while sellers sell more when things are more expensive). But making them as explicit as economics does aids in thinking, and can sometimes then uncover quite counterintuitive ideas or findings.

Now, that obviously doesn't mean that all intuitive-seeming models are worth writing up or sharing. If it's not just that the model is "obvious", but in fact that people already explicitly recognised all the individual pieces and interactions in a clear way, then the model may not add value. But personally I think this is one useful way of collecting, making explicit, and structuring various intuitive ideas that often aren't made fully explicit. (Though they sometimes are: as we note, "We’re sure other models could be generated, and could likely also be helpful.")

Thanks for the write up. I think it's important to have specified methods for conducting any research, and this post does so clearly (at least as clearly as possible in this abstract work).

Have you looked at the literature on similar/analogous prioritisation research?

I intuitively think that the hard work will be in modelling causality. Have you done any work on that component?

(My views, not Convergence's, as with most of my comments)

I think I'd personally also suspect that modelling causality might be the hardest step. But I'd also suspect mapping the space to perhaps seem easier than it really is, in a sense, because it's quite easy to map part of the space, and perhaps quite easy to then overestimate how much of the space you mapped, and underestimate the odds that you've failed to even notice some very important (clusters of) possible interventions or consequences. This is related to ideas like unknown unknown and Bostrom's crucial considerations.

I think some of the biggest wins of EA have probably been from mapping (maybe particularly of consequences, rather than interventions), more than from modelling. In particular, I have in mind identifying that it may be worth considering things like the wellbeing of people millions of years from now, astronomical waste, AI safety, global famine in a nuclear or impact winter (I'm thinking of ALLFED's work), and the welfare of wild animals. I think all of these things were noticed by some people before EAs got to them, but that they were mostly ignored by the vast majority of people.

In fact, I think one of the main reasons why "modelling" in the more standard sense is often so hard to do well is that there are many possible unknown unknowns like those things I listed, which could totally change the results of one’s model but which one hasn’t even thought to account for. So with this framework separating out mapping the space and modelling causality, the modelling causality step itself may be less difficult than one would normally expect "modelling" to be (though definitely still difficult).

(Prioritizing between strategies seems to me the simplest step. And constructing strategies seems like a step where it might be hard to get the optimal results, but where the gap between optimal and ok results won't be huge in the same way it might be for the mapping and modelling stages.)

I'm less sure what specifically you're interested in with your two questions. Also, I didn't come up with the framework in this post (my role was more to refine and communicate it), so my own knowledge and views weren't pivotal in forming it. But I can say that it seems to me that this framework doesn't clash with, and can be complementary too, various ideas, prioritisation processes, and modelling processes from groups like 80k, GPI, GiveWell, and Charity Entrepreneurship. And I believe that Convergence will soon be releasing various other work related to things like frameworks and tools for modelling causality and (I think) prioritisation research.

Thanks for mentioning ALLFED! As we note in the model you link to, a more updated model is here.

Oh, good catch, sorry about that! I've now updated the link in the post.

(By the way, the "prioritizing" image isn't meant to be massive - if anyone knows how to choose the size of images, please let me know!

If I use the standard editor, many of the images are tiny. If I use the markdown editor, the rest are a good size, but that one is huge.)

(I've managed to make it merely too large, rather than massive, by adding large white borders to the image itself, so that the image can't expand too far. But I'd still be interested in hearing of a proper fix.)