Could you live on the international poverty line?

I’ve heard that to live in poverty, you have to make impossible decisions. For example, will you feed your son, allow him to starve so that your daughter can attend school, or take your mother to the doctor at the expense of both? The International poverty line should help us to relate to this kind of challenge. However, US$1.25 seems like an impossibly small amount of money to live on. So what can you truly buy on the international poverty line, and how is this line determined?

The international poverty line is determined by the World Bank, and is Purchasing Power Parity (PPP) adjusted

In 80% of cases, the World Bank calculates a local poverty line using the cost of basic needs method (1). That is, they find the price of a food bundle containing the daily energy requirement and add basic non-food expenses like access to shelter and fresh drinking water. In India, where one third of the world’s poor live (2), this gives a poverty line of 18 Rupees (3).

18 Rupees are only worth 41 cents. However, as you will know if you are a traveller, this amount of money will buy more groceries in India than back home. This is why the Bank performs a PPP adjustment. Across a wide range of goods, they compare the prices of identical items in each country, in this case the US and India. Since these items cost three times as much in the US, the international poverty line is scaled up from 41c to $1.25. The groceries that you can buy for $1.25 have same value as 18 rupees of Indian groceries. So this low figure of US$1.25 is not just a trick of different purchasing powers.

$1.25 of US groceries will have the same value as 18 rupees of Indian groceries. However, they still may not contain enough energy. To illustrate this principle, suppose you bring $1.25 to the cheapest supermarket you can find. Even there, the rice on offer is valuable for its fibre content. The beans are valuable because they are organic. These inflate the cost of the groceries, but they don’t help you. Your $1.25 of groceries – luxurious though they may be – may not meet your daily energy requirements.

There is no straightforward way for the World Bank to correct for the variation between these economies. The PPPs compare items from the entire cross-section of each nation’s spending; they do not focus on the purchasing of the poorest individuals. A measure based on the consumption of the poor, called a Poverty Purchasing Power Parity, is very useful for comparing developing nations. However, it cannot be reliably extended to the US because no one there is poor on the global scale. “There are no poverty line weights for the United States because no one lives at that level” (4), say World Bank authors Deaton and Dupriez. To improve on the $1.25 figure, and truly understand poverty in terms of our own currency, we would need to start over with the cost of our basic needs.

On average, food expenses make up 56% of the international poverty line (5).  Will this hold true for those living in the US? Well, we know from Live Below the Line that $1.50 of food is barely enough to survive. This could easily blow our budget. Fortunately, as Will McAskill points out, there is a robust, though unfashionable alternative (6). If we gather food discarded by retailers, a practice known as dumpster-diving, we will reduce our food expenditure to practically zero. So the availability of discarded food will redeem our rich society for its absence of cheap food!

Obtaining shelter is at least equally difficult. It will be tempting to become homeless and live under the side of a building or landscaping (7), or to become a squatter. Private homeless shelters may aid us. It may be optimal to live in a van, although if this costs two thousand dollars (8), we will have spent five years’ money at once. Maybe we could live in old cars, or share one. Maybe we ought to resell it in order to make some of our money back. Fortunately, some education and healthcare are available for free.

Living on $1.25 per day in the US may be feasible. However, as no one lives so cheaply in the US (9), it is unclear whether this is easier or harder than living on the poverty line overseas.

The relative poverty line is not a better estimate

Relative poverty is measured by taking the average or median income in a society and then halving it, or by asking people “How much they would need to get by”. The argument for relieving relative poverty is that relative deprivation matters to a person’s welfare. However, though relative poverty is harmful, it is the kind of harm that is likely require larger amounts of resources to relieve. If I was asked the amount required to get by before I researched the issue myself, I would not be able to imagine how resourceful one can be if absolutely required. This will be a systematic flaw of polling people regarding poverty.

Consider that on a relative view, if your Body Mass Index (BMI) is less than your country’s average, then you are relatively malnourished. If you buy cheaper clothes than others in your society, you are relatively naked. These measurements regard infer that you are poor when actually your society spends extravagantly and vainly. Here is the hard line: the American absolute poverty line is simply the international absolute poverty line, US$1.25. Although this picture is imperfect, it comes far closer to the truth than just substituting half a nation’s median income.

And what do groceries cost in Bangalore?

Adjusting for inflation in India since the 2005 ICP, the old figure of 18 rupees can be adjusted up to 36 rupees (10). I have gathered some prices from an online shopping service based on Bangalore, to suggest what you can and can’t afford on this budget (click to open): 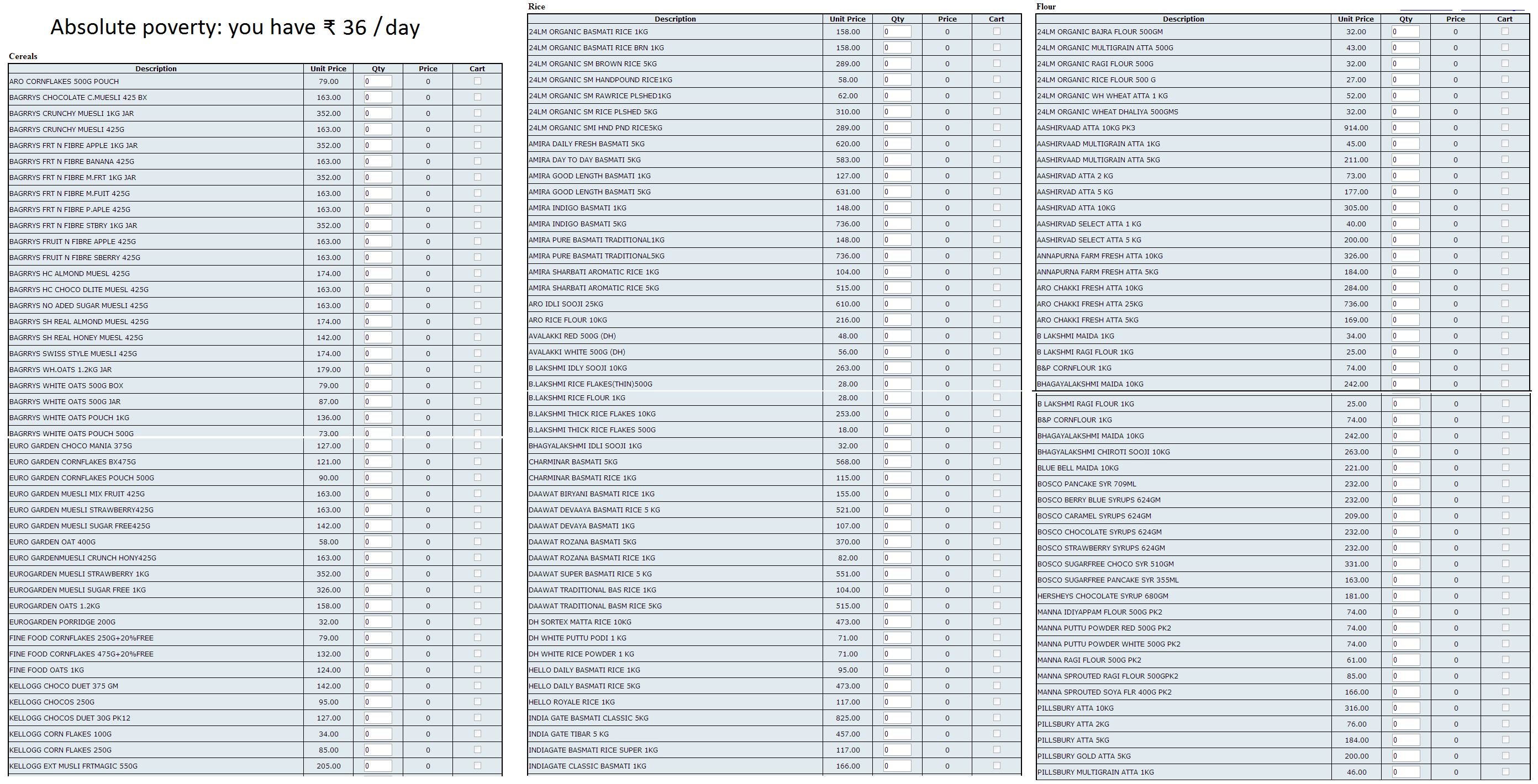 Online shops target richer than average Indian consumers, and there are likely to be better deals elsewhere. On the other hand, remember to save some of your 36 rupees for expenses other than groceries!

So $1.25 per day of your funds may not be enough to live in America. However, 41 cents is enough to live elsewhere. Now might be a good time to reevaluate your sense of privilege!

At little cost, you can help others a lot. If this is something you are interested in doing, join this Facebook group, and ask ‘how?’

Also, Giving What We Can and 80,000 Hours have good suggestions for how you could contribute your funding or your time respectively.