In 2002, Nick Bostrom introduced the concept of differential technological development. This concept is highly relevant to many efforts to do good in the world (particularly, but not only, from the perspective of reducing existential risks [EA · GW]). Other writers have generalised Bostrom’s concept, using the terms “differential intellectual progress” or just “differential progress”. I think these generalisations are actually even more useful.

I’m thus glad to see that many (aspiring) effective altruists and rationalists seem to know about and refer to these concepts. However, it also seems that people referring to these concepts often don’t clearly define/explain them, and, in particular, don’t clarify how they differ from and relate to each other.

Thus, this post seeks to summarise and clarify how people use these terms, and to outline how I see them as fitting together. The only (potentially somewhat) original analysis is in the final section; the other parts of this post present no new ideas of my own.

In his 2002 paper on existential risks, Bostrom writes:

If a feasible technology has large commercial potential, it is probably impossible to prevent it from being developed. At least in today’s world, with lots of autonomous powers and relatively limited surveillance, and at least with technologies that do not rely on rare materials or large manufacturing plants, it would be exceedingly difficult to make a ban 100% watertight. [...]

What we do have the power to affect (to what extent depends on how we define “we”) is the rate of development of various technologies and potentially the sequence in which feasible technologies are developed and implemented. Our focus should be on what I want to call differential technological development: trying to retard the implementation of dangerous technologies and accelerate implementation of beneficial technologies, especially those that ameliorate the hazards posed by other technologies. [...] In the case of biotechnology, we should seek to promote research into vaccines, anti-bacterial and anti-viral drugs, protective gear, sensors and diagnostics, and to delay as much as possible the development (and proliferation) of biological warfare agents and their vectors. [bolding added]

Of course, in reality, it’ll often be unclear in advance whether a technology will be more dangerous or more beneficial. This uncertainty can occur for a wide variety of reasons, including the fact that how dangerous a given technology is may later change due to the development of other technologies (see here [LW · GW] and here [EA · GW] for related ideas), and that many technologies are dual-use.

Note that technology is sometimes defined relatively narrowly (e.g., “the use of science in industry, engineering, etc., to invent useful things or to solve problems”), and sometimes relatively broadly (e.g., “means to fulfill a human purpose”). Both Bostrom and other writers on differential technological development seem to use a narrow definition of technology. This excludes things such as philosophical insights or shifts in political institutions; as discussed below, I would argue that those sorts of changes fit instead within the broader categories of differential intellectual progress or differential progress.

Other writers later introduced generalisations of Bostrom’s concept, applying the same idea to more than just technological developments (narrowly defined). For example, Muehlhauser and Salamon quote Bostrom’s above recommendation, and then write:

But good outcomes from intelligence explosion [basically, a rapid advancement of AI to superintelligence] appear to depend not only on differential technological development but also, for example, on solving certain kinds of problems in decision theory and value theory before the first creation of AI (Muehlhauser 2011). Thus, we recommend a course of differential intellectual progress, which includes differential technological development as a special case.

Tomasik also takes up the term “differential intellectual progress”, and tentatively suggests, based on that principle, actions such as speeding up the advancement of social sciences and cosmopolitanism relative to the advancement of technology. (Note that Tomasik is seeing technology as a whole as relatively risk-increasing [on average and with caveats], which is something that the original concept of “differential technological development” couldn’t have captured.) Tomasik provides in this context the following quote from Isaac Asimov:

Note that, while the term “differential intellectual progress” was introduced in relation to AI alignment, and is often discussed in that context, it can be about increases and decreases in risks more broadly, not just those from AI.

Also note that we’re using “progress” here as a neutral descriptor, referring essentially to relatively lasting changes that could be either good or bad; the positive connotations that the term often has should be set aside. "Differential intellectual development" might therefore have been a less misleading term, given that it's somewhat easier to interpret "development" as being neutral rather than necessarily positive.[1] I will continue to use the established terms "differential intellectual progress" and "differential progress", but when defining and explaining them I'll say "development" rather than "progress".

Differential progress (and tying it all together)

Some writers have also used the seemingly even broader term differential progress (e.g., here and here [EA · GW]). I haven’t actually seen anyone make explicit what slightly different concept this term is meant to point to, or whether it’s simply meant as an abbreviation that’s interchangeable with “differential intellectual progress”.[2]

But personally, I think that a useful distinction can be made, and I propose that we define differential progress as “prioritizing risk-reducing developments over risk-increasing developments”. This definition merely removes the word “intellectual” (in two places) from Muehlhauser and Salamon’s above-quoted definition of differential intellectual progress, and replaces "progress" with "developments" (which I would personally also do in defining their original concept, to avoid what I see as misleading connotations).

Thus, I propose we think of “differential progress” as a broad category, which includes differential intellectual progress as a subset, but also includes advancing types of risk-reducing developments that aren’t naturally considered as intellectual. These other types of risk-reducing developments might (perhaps) include the spread of democracy, cosmopolitanism, pacifism, emotional stability, happiness, or economic growth. (I don’t know if any of these are actually risk-reducing; I’m merely offering what seem to be plausible examples, to help illustrate the concept.)

Differential progress also includes slowing risk-increasing developments. Such risk-increasing developments can include intellectual progress. But they can also include types of development that (again) aren’t naturally considered as intellectual, such as (perhaps) nationalism, egoism, or economic growth. Development along these dimensions could be slowed by intellectual means, but could also (perhaps) be slowed by things like trying to make certain norms or ideologies less prominent or visible, or being less economically productive yourself.[3] 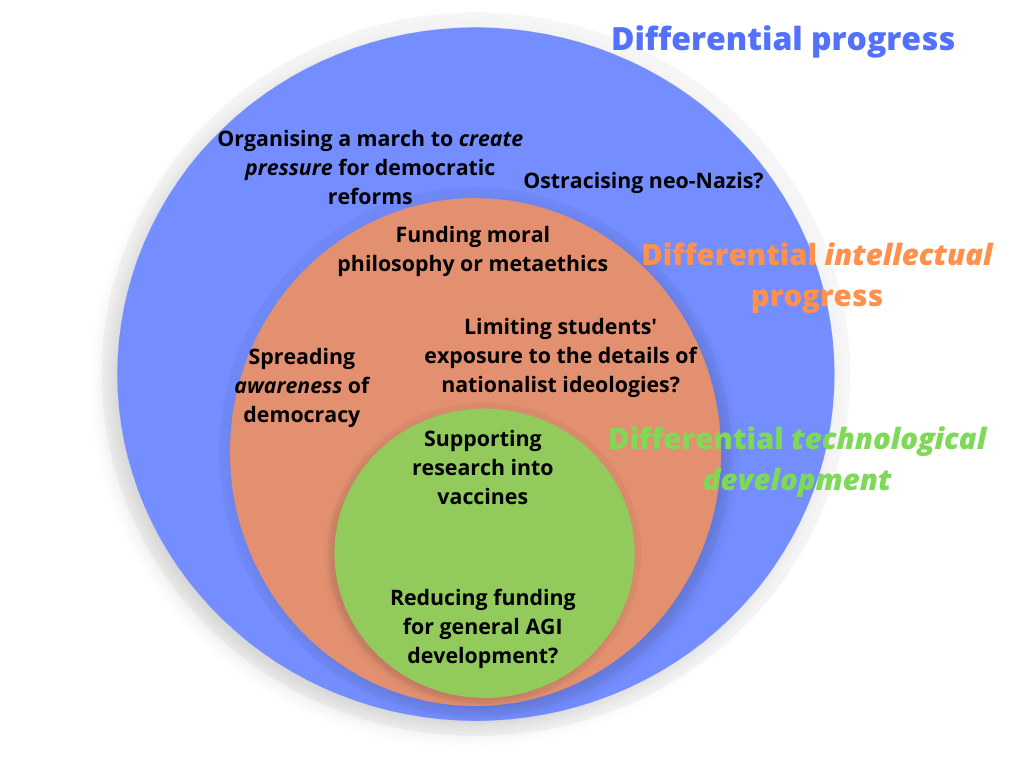 I’d also like to re-emphasise that my aim here is to illustrate the concepts, not make claims about what specific actions these concepts suggest one should take. But one quick, tentative claim is that, when possible, it may often be preferable to focus on advancing risk-reducing developments, rather than on actively slowing risk-increasing developments via methods like trying to shut things down, remove funding, or restrict knowledge. One reason is that people generally like technological development, funding, access to knowledge, etc., so actively limiting such things may result in a lot more pushback than just advancing some beneficial thing would.[5] (This possibility of pushback means my examples for slowing risk-increasing developments are especially uncertain.)

Relationship to all "good actions"

More specifically, there may be some "good actions" that are good for reasons unrelated to risks (by which we particularly mean catastrophic or existential risks). For example, it's plausible that something like funding the distribution of bednets in order to reduce infant deaths is net beneficial, due to improvements in present people's health and wellbeing, rather than due to changes in the risks humanity faces.[7]

Meanwhile, differential progress will always have at least some positive effects, in expectation, as it always results in a net reduction in risks. But there may be times when differential progress is sufficiently costly in other ways, unrelated to risks, that it's not beneficial on balance. For example, slowing the advancement of a technology that is incredibly slightly risky, and that would substantially increase the present population's wellbeing once developed, could classify as differential progress but not as a "good action". 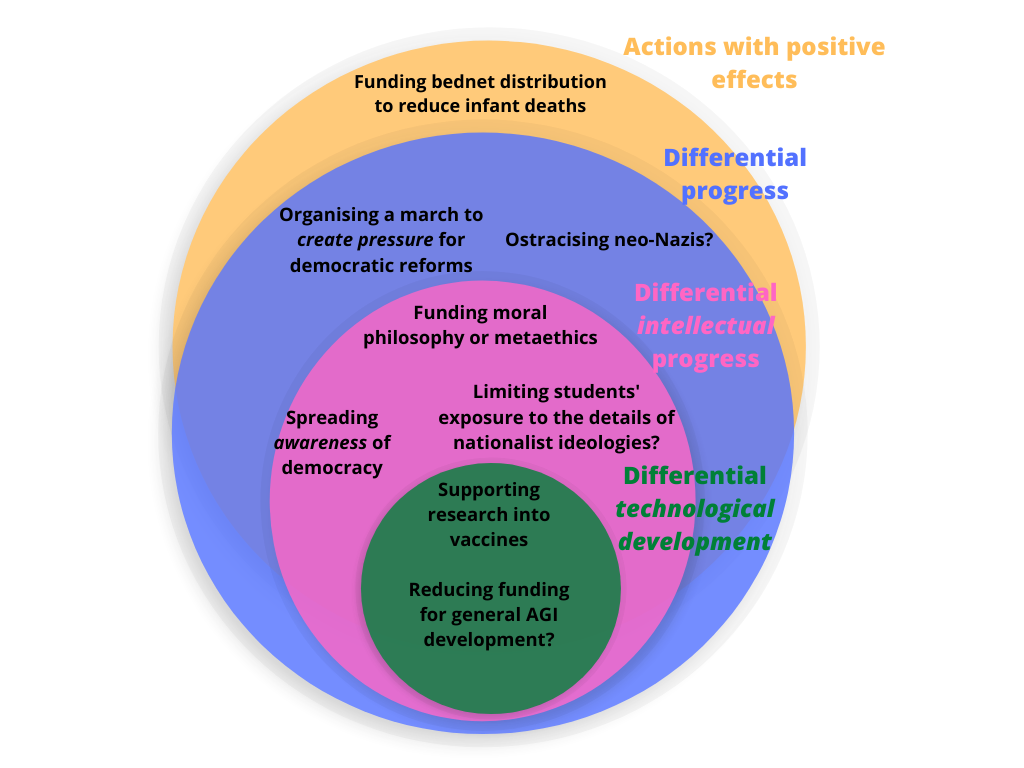 I hope you’ve found this post clear and useful. If so, you may also be interested in my prior post [LW · GW], which similarly summarises and clarifies Bostrom’s concept of information hazards, and/or my upcoming post, which will summarise his concept of the unilateralist’s curse and discuss how it relates to information hazards and differential progress.

My thanks to David Kristoffersson and Justin Shovelain for feedback on a draft of this post.

Other sources relevant to this topic are listed here [EA(p) · GW(p)].