Why Does Qualia Research Institute Exist?

As a human collective, we want to create good futures. This encompasses helping humans have happier lives, preventing intense suffering wherever it may exist, creating safe AI, and improving animals’ lives too, both in farms and in the wild.

But what is happiness? And what is suffering?

Until we can talk about these things objectively, let alone measure and quantify them reliably, we’ll always be standing in murky water.[3]

The core question remains the same:

How do we objectively measure and quantify properties of conscious experience?

Qualia Research Institute (QRI) is a non-profit research center operating outside of academia. We are a small team of independent researchers studying consciousness in a consistent, meaningful, and rigorous way.

Our goals are ambitious yet realistic:

As far as we know, we are the first and only research group that uses a qualia formalist[4] approach to consciousness, cares about valence, and takes the phenomenology of altered states of consciousness seriously.[5]

How We Expect To Make Progress Toward Our Mission

Developing an accurate and precise ‘valence meter’ is one of QRI’s north stars. This goal is similar to (though distinct from) Integrated Information Theory researchers’ attempt to invent an accurate ‘consciousness meter’.

We intend to make progress towards this goal by generating theories of valence that are universal in their explanatory power, attempting to experimentally corroborate our theoretical models with state-of-the-art techniques in neuroscience, and building non-invasive neurotechnology that can reliably produce large positive effects based on our developing theory of valence.

In addition to our valence-specific research plans, we believe that mapping out exotic properties of consciousness will provide valuable clues about how consciousness fundamentally works. An analogy is that ignoring exotic states of consciousness is similar to pre-enlightenment scientists trying to understand energy, matter, and the physical world just by studying it at room temperature while disregarding extreme boundary conditions like the sun, black holes, plasma, and superfluid helium. Ignoring these states may be equivalent to refusing to look through Galileo's telescope.

Finally, we intend to become a hub for all types of high-valence biological data, including fMRI data from our academic partners, subjective reports of extremely blissful states, and genomic data of people who report a high degree of baseline happiness. Alongside this data collection, we aim to create an environment that fosters dialogue between researchers studying AI, neuroscience, meditation, and psychedelics.

Michael Edward Johnson - Co-Founder and Co-Director of Research at QRI. Mike is the author of Principia Qualia and blogs at opentheory.net.

Andrés Gómez Emilsson - Co-Founder and Co-Director of Research at QRI. Andrés has a Master’s Degree in Computational Psychology from Stanford, co-founded the Stanford Transhumanist Association, was first place winner of the Norway Math Olympiad, and blogs at qualiacomputing.com.

Quintin Frerichs - Director of Engineering at QRI. Quintin graduated from Washington University in St. Louis, where he studied computer science and PNP (Philosophy-Neuroscience-Psychology) and worked as a network security engineer for a Seattle-based firm.

Mackenzie Dion - Director of Operations & Development at QRI. Mackenzie is a Morehead-Cain Scholar and senior at UNC where she studies Psychology and Neuroscience. Prior to QRI, Mackenzie worked for several startups and nonprofits in alternative proteins, including the Good Food Institute (GFI) and Aleph Farms.

Sean McGowan - Research and Development Coordinator at QRI. Sean is a recent graduate from Dartmouth College where he studied Cognitive Science and Mathematical Physics. 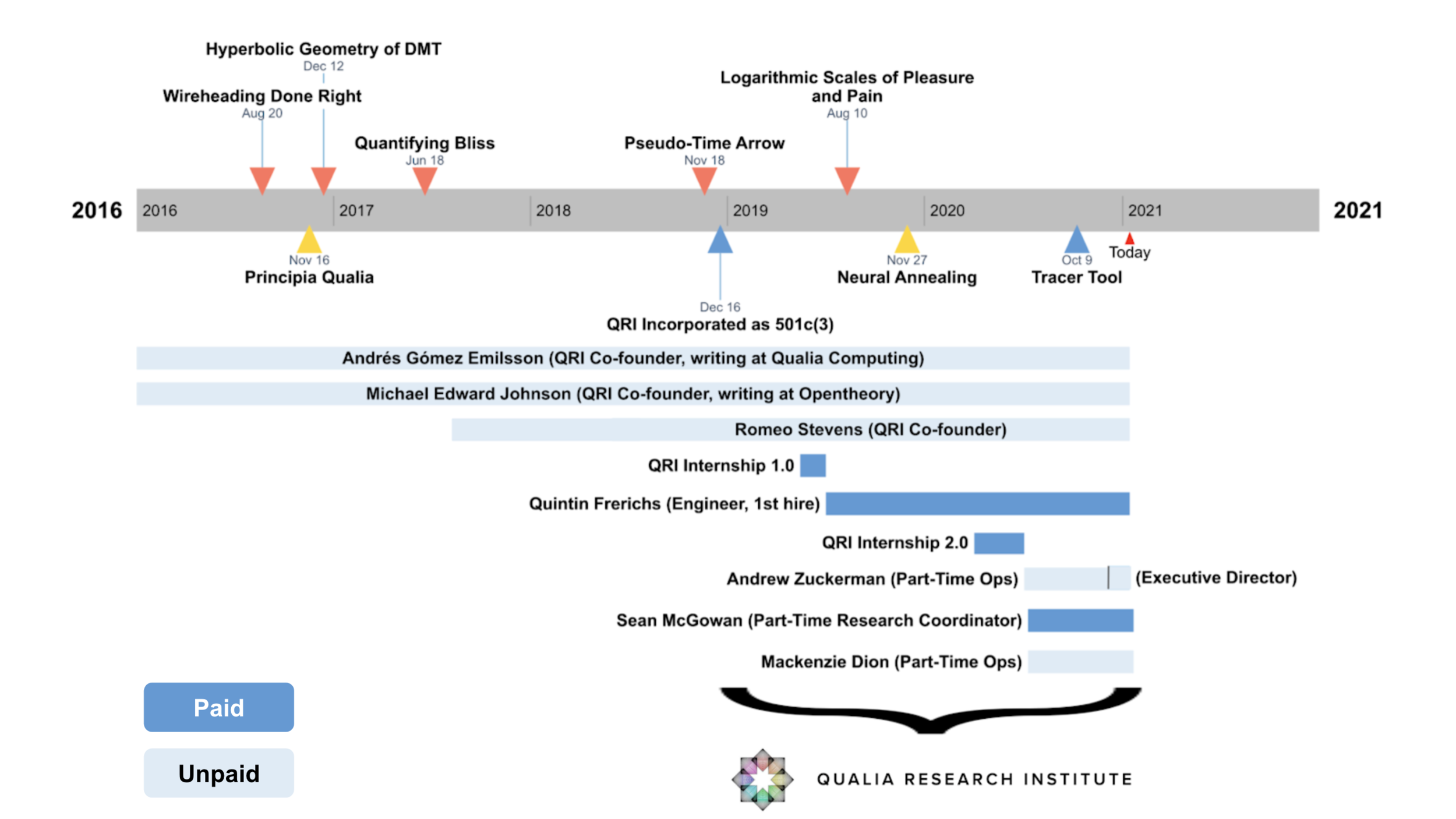 For the full timeline breakdown, see Appendix A.

How We’ve Used Money So Far

Since its inception in 2018, QRI has used approximately $125k total, or about $62.5k / year. That money has paid for Quintin’s full-time annual salary, a part-time salary for Sean, stipends for interns, prototyping equipment, software, and travel costs.

QRI Is More Constrained by Funding Than by Talent

Today, QRI is not struggling to find research directions. We have a backlog of ideas, both theoretical and experimental, that we’d like to work on. We have been approached by multiple leading academics requesting to collaborate and we don’t have capacity to take on many of the opportunities we encounter. Inside our personal networks, there are talented engineers and data scientists that we would hire (and who have expressed mutual interest in working with us). All we need is the funding to do so.

What We Would Do With More Funding

With additional funding, the first thing we’d do is begin paying core team members. These core roles are:

We are confident that the following three roles would bring tremendous value to our research agenda:

We have already identified candidates for these roles that we would like to hire.

Computing power is another core bottleneck that is slowing down our research. For example, in the past few months, several of our fMRI data analyses have each taken over 7 days to finish processing. With more funding, we would invest in compute to speed up this processing by 10x.

We’ve noticed that much of our best work occurs when we’re working together in the same physical location where information can flow freely from team member to team member. We are interested in setting up a physical location for the research team to work together (as the pandemic allows).

We will also be investing in important organizational upgrades. Quality research doesn’t exist in a vacuum, and we know that a smoothly operating ecosystem is needed to create the conditions for doing good research.

We will continue to increase contact with outside researchers at academic institutions and neuroscience research centers, finding professional researchers that can review our methods. We will also release preprints of our research on sites like PsyArXiv.

Inspired by Olah & Carter’s “Research Debt”, which describes the importance of research distillation, we will experiment with producing high-quality visualizations of our research to increase its legibility. We want to make it easy for busy researchers to understand our contributions and feel comfortable citing our work.

Some of our research won’t be written for academic publication, yet we want to make sure those pieces reach the right audiences. We are creating a professional publishing-first site to host our research. For these works, we will use internal feedback systems to ensure that this content also maintains high standards.

We are focusing on top-down hiring to continue to build out a strong research organization. In the past, we have received many requests from volunteers looking to help QRI. We will aim to sustain this organic interest through a newly created r/QualiaResearch subreddit in addition to the Qualia Computing Networking Facebook group that has served as a hub in the past. We will also update our website to reflect the changes in our approach to volunteering. Once we have sufficient funding, we will advertise for new roles on our website, reach out to relevant candidates in our networks, and contact talented postdocs whom we would be excited to hire.

Why We Are a Nonprofit Research Group

Even though we are developing technology at QRI that could lead to for-profit spin-off companies, we believe that a for-profit structure does not provide the optimal incentives for our current work. We are interested in focusing on fundamental and foundational research without rushing to find product-market fit.

For similar reasons, QRI exists outside of the academy. Many research ideas that we explore come from new paradigms, and our current view is that academic pressures leave little room to fruitfully engage with this territory. For example, we don’t expect to publish high-quality trip reports in academic journals, yet we believe that such reports are important puzzle pieces for reverse-engineering consciousness.

Some of our research will be publishable in academic journals, and we are excited to begin doing this. In the future, we hope that our neurotechnology research leads to practical, commercializable treatments. But right now, a non-profit structure is what makes the most sense for what Qualia Research Institute is trying to accomplish.

We are currently raising $1.5 million USD to support our existing team and make the three hires discussed above: a signal processing engineer, a computational neuroscientist, and a software engineer. Combined with our current reserves, raising this amount would give us 2 years of financial runway to pursue our research agenda and experiment with incubating for-profit initiatives. 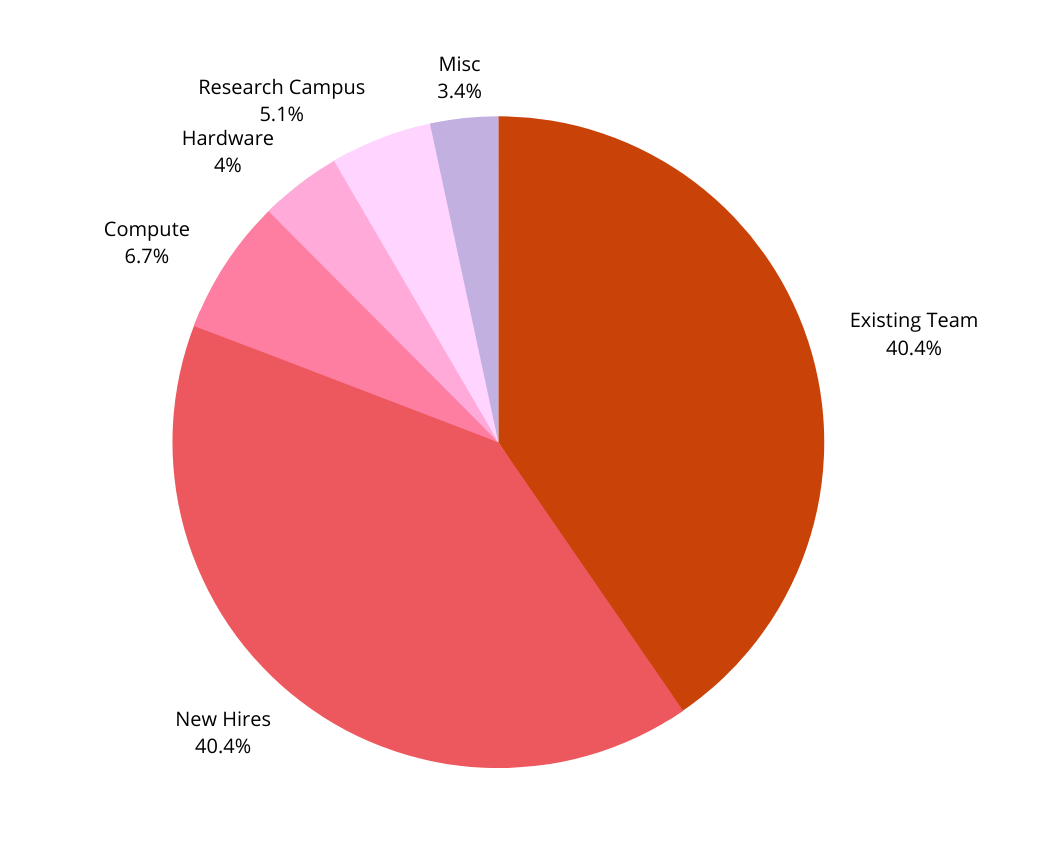 Much More Room to Grow

While the budget we’re presenting here would pay for a baseline Qualia Research Institute, we believe that we could put an influx of additional funding to great use over the next five years. Consciousness research is still an extremely neglected cause area, and we have ideas for developing this discipline with more engineers, neuroscientists, physicists, philosophers, and mathematicians. Some of these visions have been outlined in Emilsson’s “The Super-Shulgin Academy: A Singularity I Can Believe In” and “Peaceful Qualia: The Manhattan Project of Consciousness”.

The Importance of Understanding Valence

Even though the many practical outcomes of successful consciousness research weren’t discussed in detail in this piece, it is important to stress the incredible value that would come from a mechanistic understanding of valence.

In line with our goals to reduce suffering, improve baseline well-being, and reach new heights of bliss, a full understanding of valence would:

How to Donate to QRI

If you are interested in supporting Qualia Research Institute, you can donate to us here. For larger donations, please reach out to Mackenzie Dion, Director of Operations & Development, at mackenzie@qualiaresearchinstitute.org. We have a slide deck that we are happy to share by request.

Although their names weren’t directly included in this announcement, QRI would not be what it is today if not for the following people. Thank you for all for your support: Margareta Wassinge, Anders Amelin, Winslow Strong, Lawrence Wu, Patrick Taylor, Kenneth Shinozuka, Hunter Meyer, Elin Ahlstrand, Wendi Yan, Marcin Kowrygo, Ross Tieman, Jeremy Hadfield, Bar Lehman, Kushagra Sharma, Tanvi Antoo, Jasmine Wang, Mira Guetzow, Benjamin Martens, Alex Zhao, Robin Goins, Boian Etropolski, and Bence Vass. Thank you to all of our past donors. Thank you to all of our other supporters, both in-person and online. Thank you Rethink Priorities for your 2020 Impact and 2021 Strategy which helped inspire this piece. And thank you Quintin, Mackenzie, Mike, Sean, Andrés, Milan, and Daniel Segal for feedback on drafts of this announcement.

Appendix A: Timeline of QRI

2016 - 2018: Mike Johnson independently writes about consciousness on his blog Opentheory.net

Appendix B: How Our Research Interfaces with Psychedelic Research

We believe that our work will help make psychedelic science more rigorous, explain why certain substances are effective or ineffective, help lower the dose of particular drugs like MDMA and ketamine (which are neurotoxic and organ toxic, respectively) while maintaining their intended effect, create tools that help clinicians and researchers analyze and monitor psychedelic experiences in real-time, and improve the drug development process.