The Giving What We Can (GWWC) Pledge asks people to donate 10% of their income to the organizations they believe can most effectively use it to improve the lives of others. It was once used as a benchmark for the EA movement in determining growth and allocating grant money, however it has been de-emphasized over the past few years. The pledge is notably not intended for everyone, and taking the pledge can result in a loss of flexibility[1]. It does, however, seem that taking the pledge, or convincing someone else to take the pledge, is of at least some value, since donations are generally a good thing and the pledge plausibly convinces people to donate more than they otherwise would. But there’s a question of how much value pledging has and how long people stick with it.

Our analysis finds that:

How Much Money is Giving What We Can Influencing? 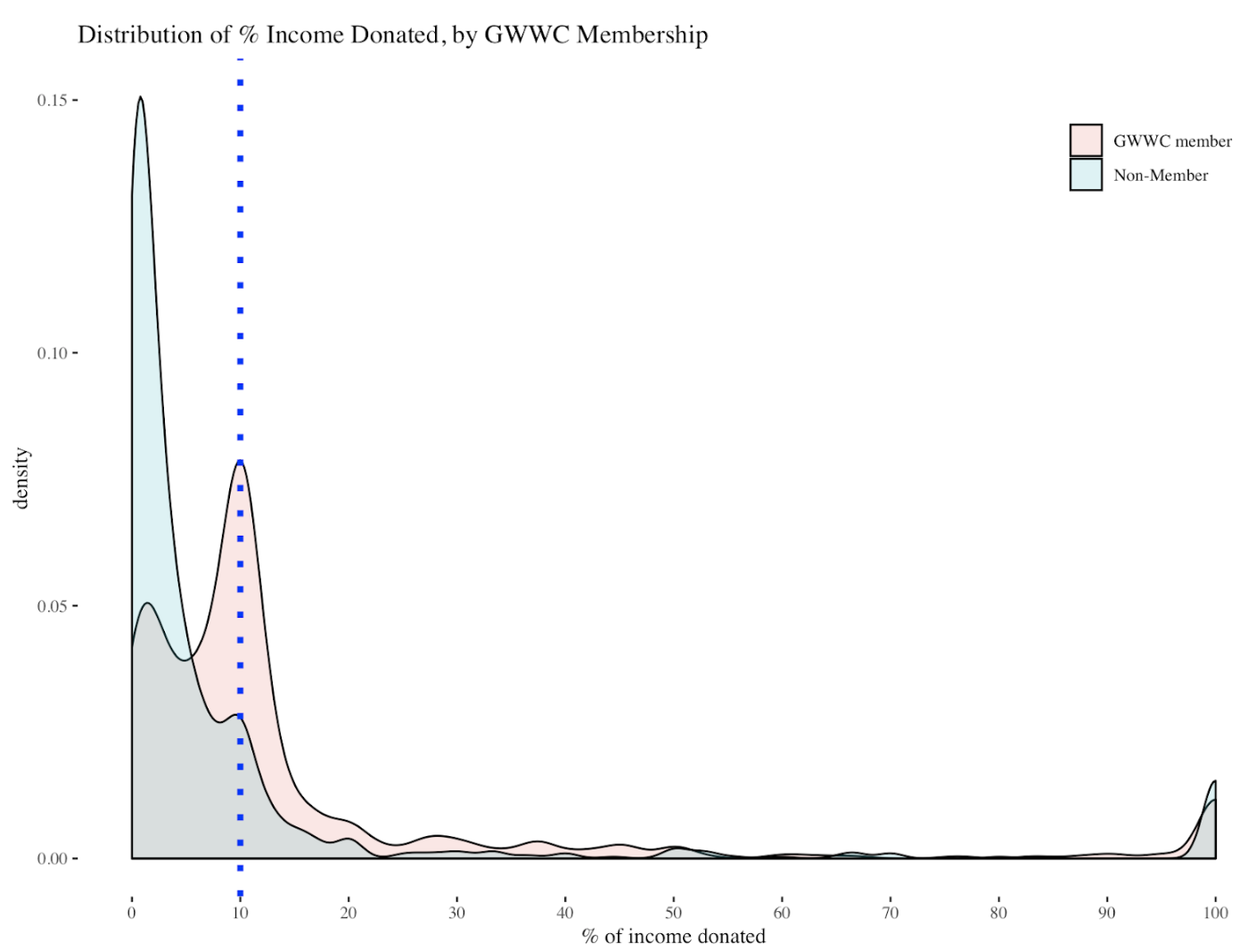 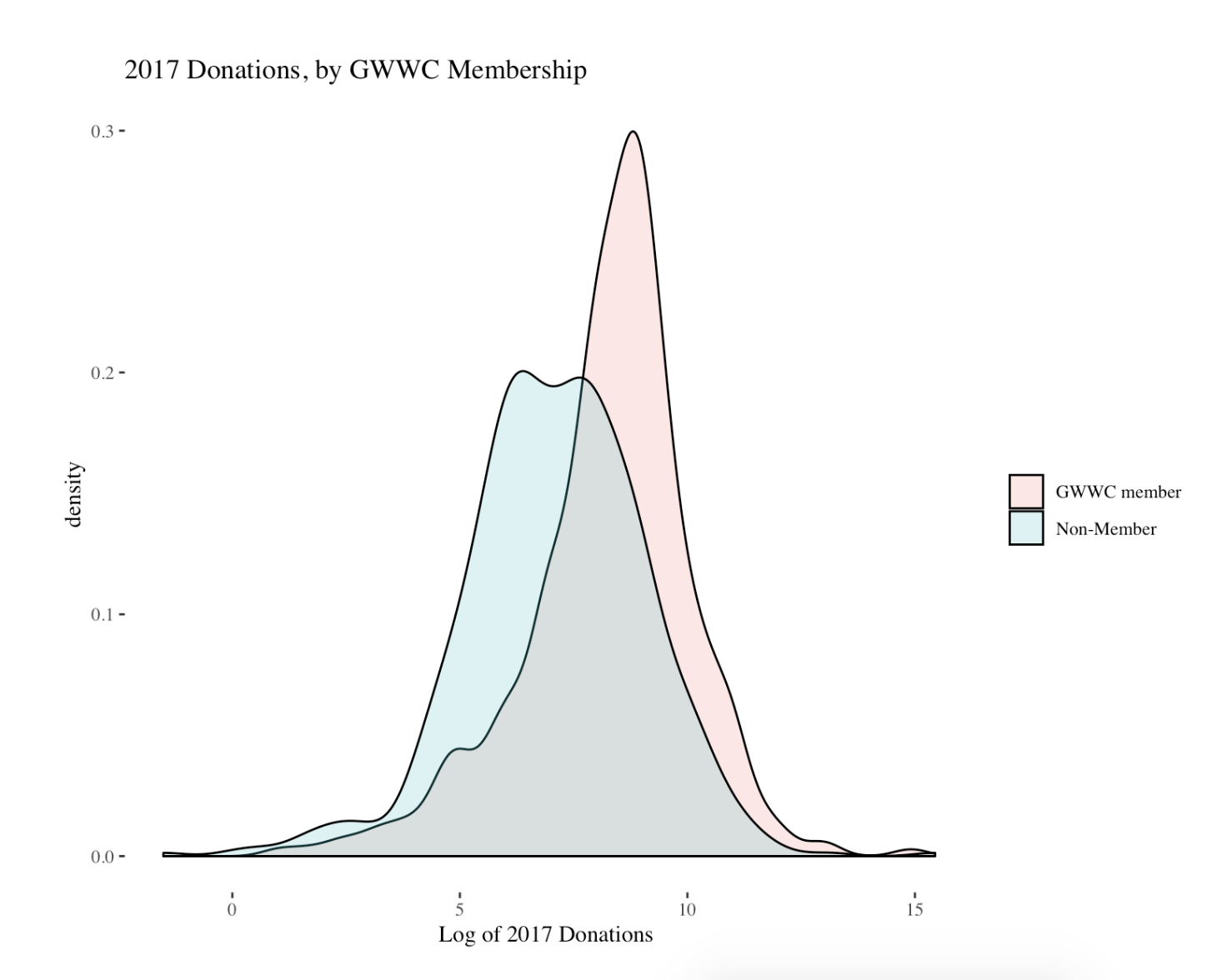 Another possibility for impact that is harder to analyze is the influence GWWC has on the moral norms of EA. For example, there may be EAs who choose not to take the pledge itself for concerns of flexibility [EA · GW], but still donate more than they otherwise would because of the influence of GWWC.

Indeed, in the distribution chart above we do see a peak at 10% even for non-GWWC members, suggesting that this target has some pull. However, the 10% target has cultural and historical precedent before GWWC existed, so it’s not easy to tell what part of this effect is attributable to GWWC or not.

How Many Giving What We Can Members Are Keeping Their Pledge?

While the GWWC pledge is meant to be taken seriously as a lifelong commitment, not everyone who takes the pledge ends up following through. As of Giving What We Can’s 2014 Impact Analysis, they had noted that 1.7% of members leave each year and an additional 4.7% of members “go silent” each year, meaning that GWWC has not been able to hear a response from them after two years (doing roughly annual check-ins), with a total number of people ceasing reporting donations (and very likely ceasing keeping the pledge) at 5.8%. 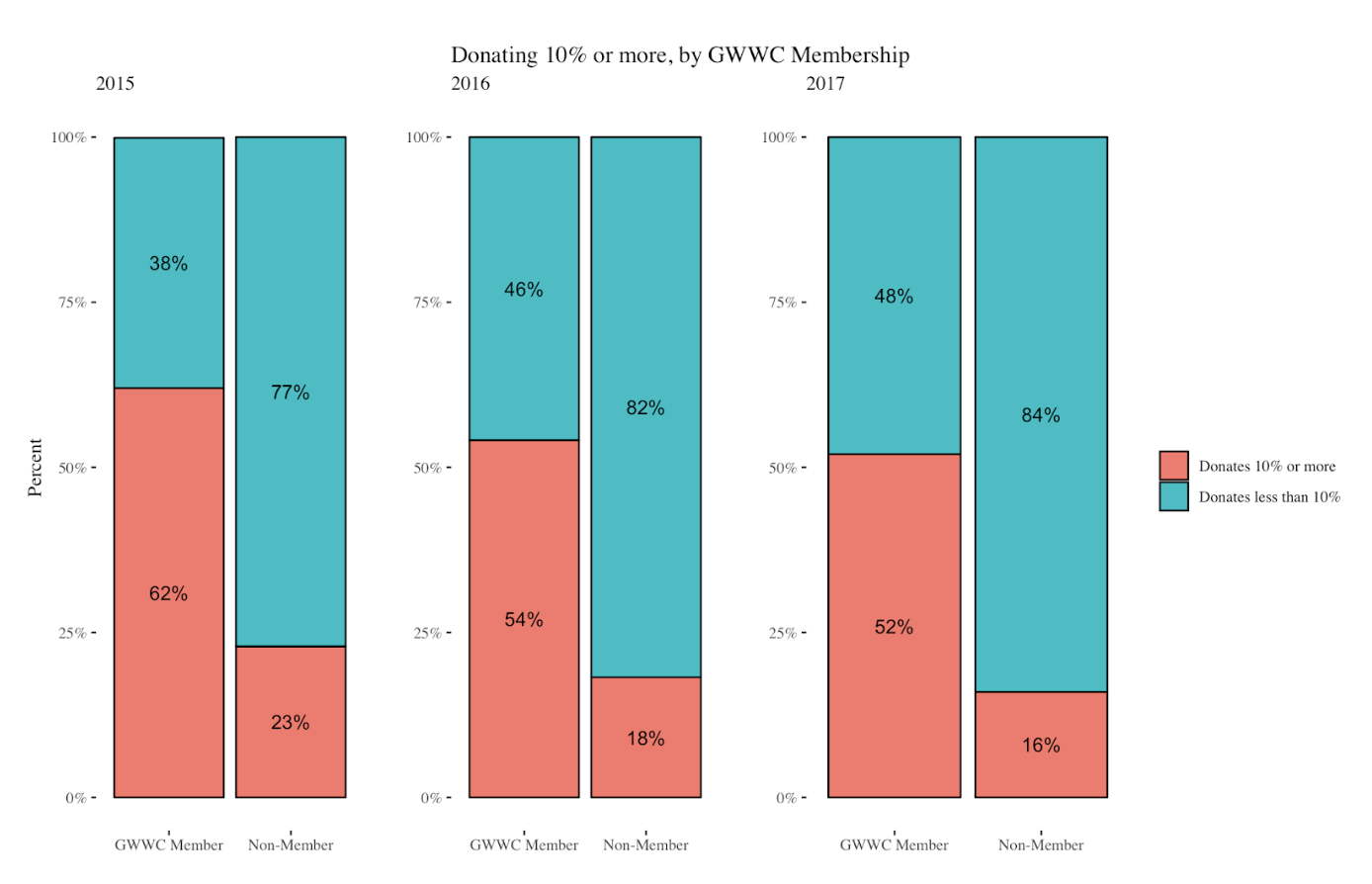 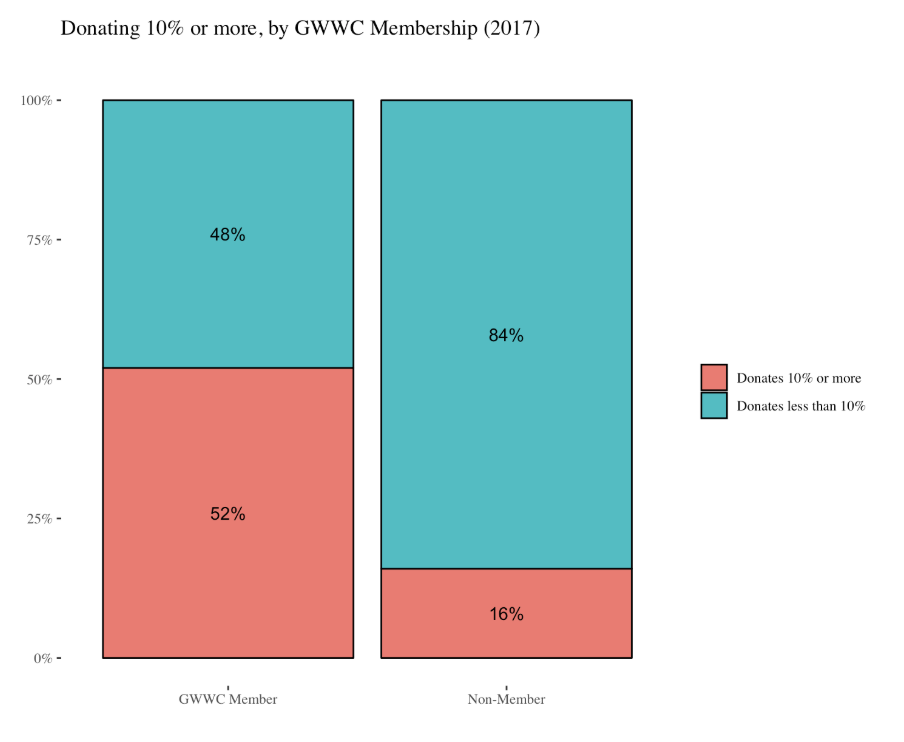 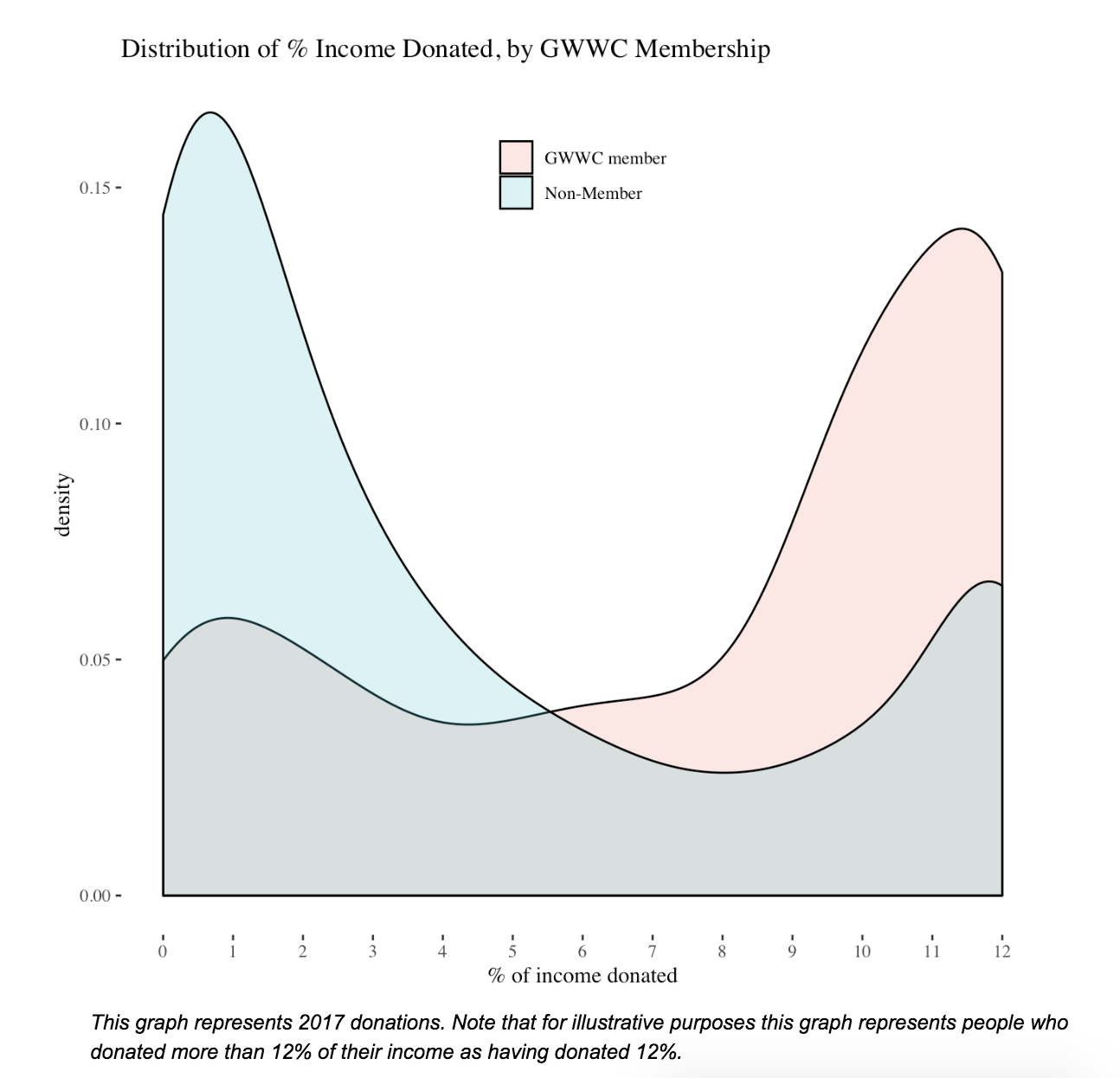 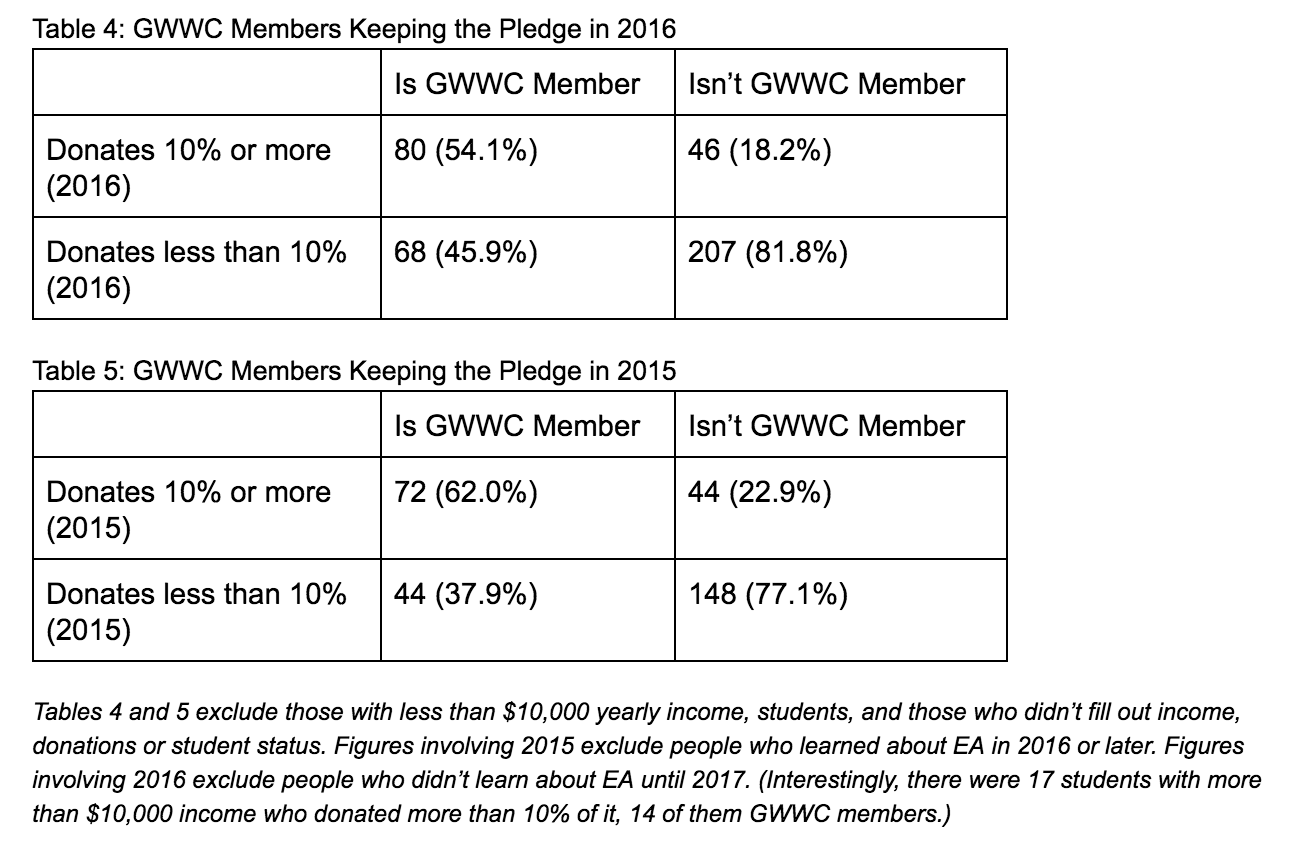 Are They “Bunching” Donations?

How do we explain that many GWWC members are reporting EA Survey data inconsistent with GWWC pledge keeping? One potential explanation is that perhaps GWWC members are “bunching” their donations, grouping two years of donations into a single year. Luckily, while the 2018 EA Survey only has us look at 2017 donation data, the 2017 EA Survey captured both 2016 and 2015 donation data for the same individuals, letting us look at a snapshot of two years of donation data for the same individual, allowing us to look to see if people meet the pledge over a two-year period instead of one[4].

We try to capture this in Table 6 and find that when you average individuals’ donations over both 2015 and 2016, 69% of GWWC members (and 17.6% of non-members) are on track to keep the pledge. There could be additional bunching not in the 2015/2016 time horizon of this survey (such as 2014-2015 bunching or 2016-2017 bunching) that might create false negatives. However, looking at data in 2018 did not find any large population of people donating in the region of 20%, which makes bunching uncaptured by Table 6 fairly unlikely.

Is it a Matter of When People Joined?

In the 2018 EA Survey, we captured data directly about when people joined GWWC (whereas in the 2017 survey we only had data about when people joined EA generally, which was also recorded in the 2018 survey). Table 7 shows that 13.64% of those who took the pledge in 2018 were already donating 10% or more in 2017. Going beyond that we can see that around half of those who took the pledge in a year before 2017 were donating 10% or more in 2017, though there are fewer people in the earlier year groups. We can also see a discernible trend of people being more likely to keep their pledge the longer they’ve been involved in GWWC. The results of two Cochran-Armitage trend tests (approximated, and simulations based) are close and lead us to conclude that there is a linear trend in the proportions[5]. 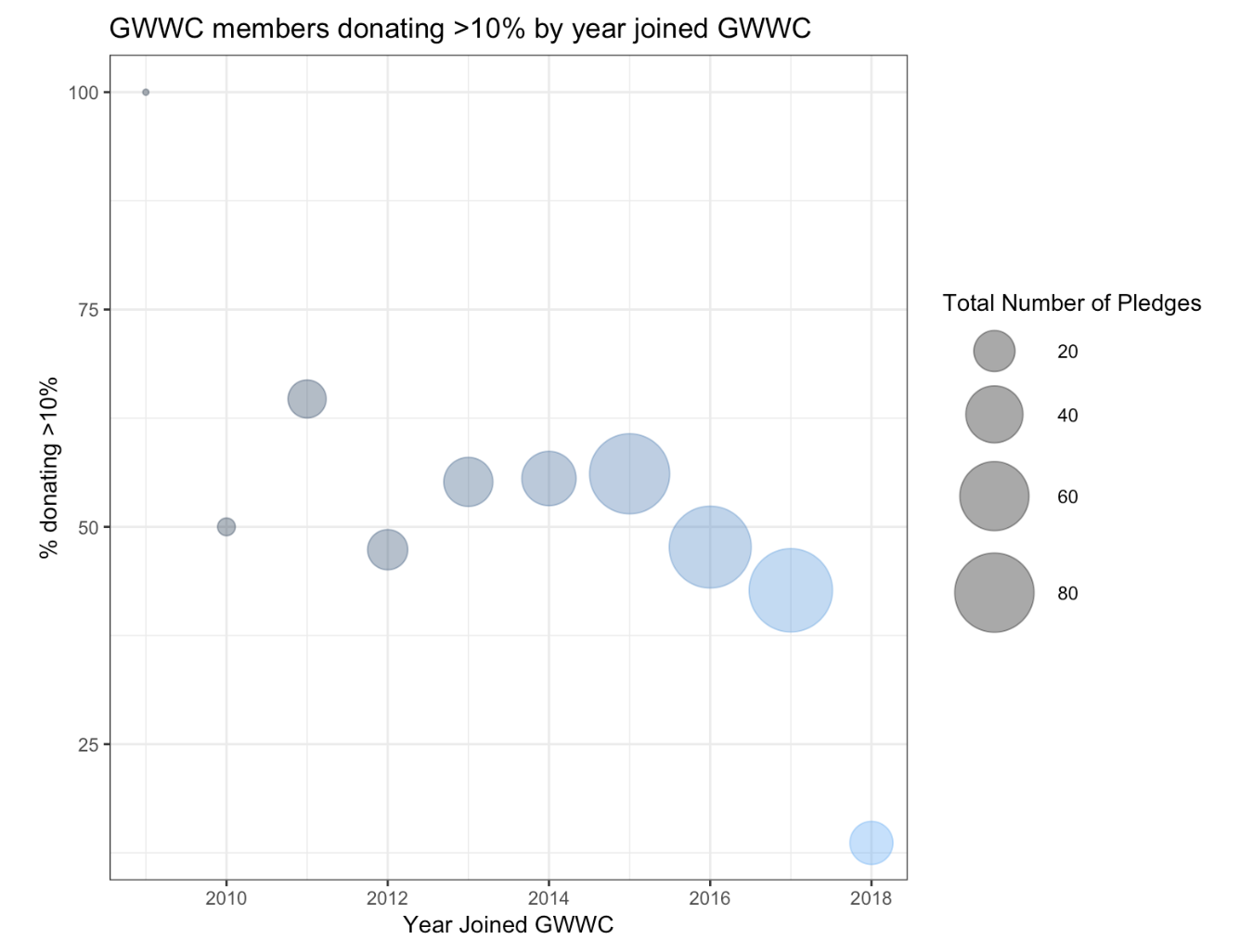 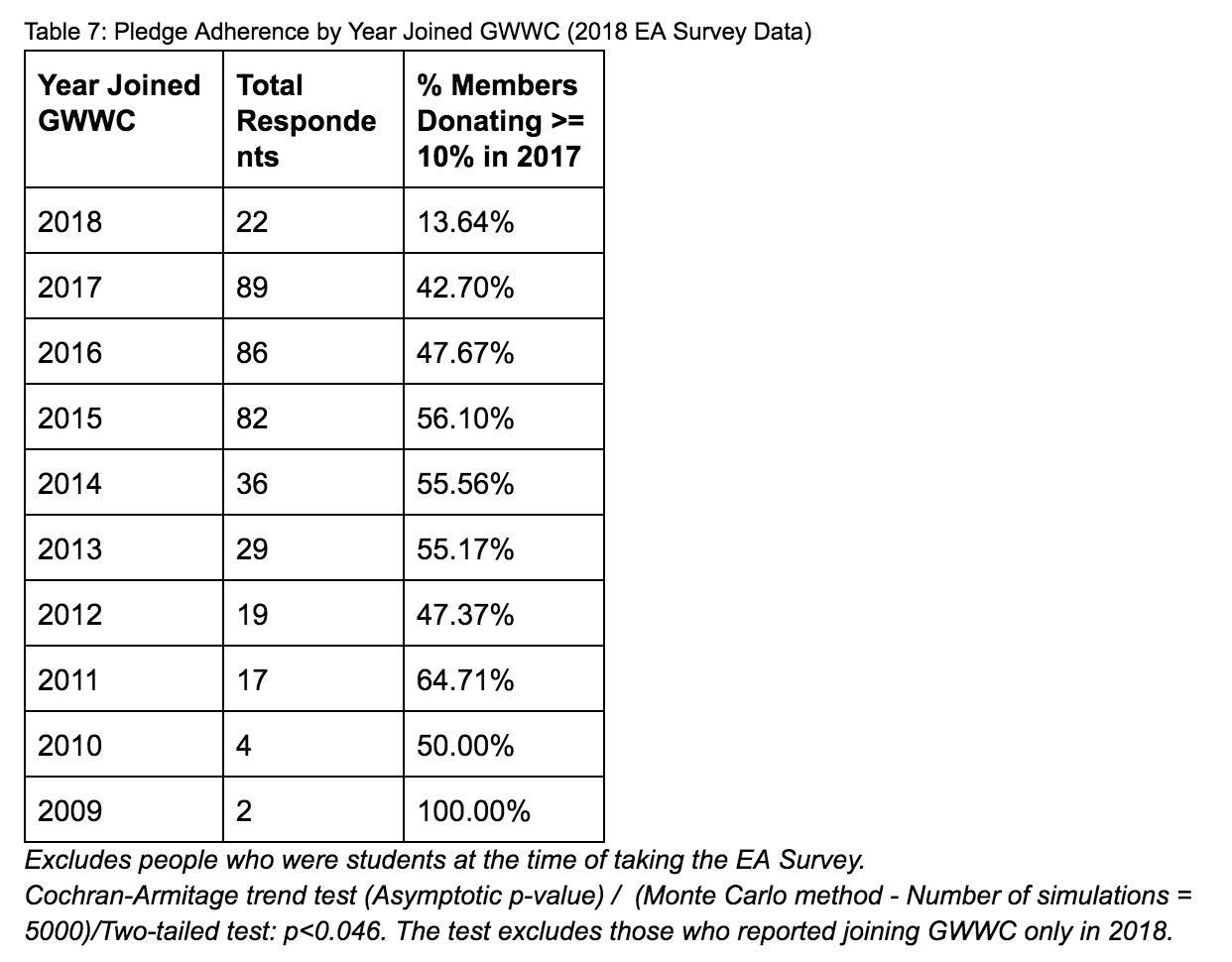 It’s harder to see how this trend holds up in our prior data. For previous years when we did not ask specifically when people joined GWWC, we can try to make up for this by filtering on when people claim they first started self identifying as an EA. Notably, this is not the same as the year they joined GWWC[6], and they may report being a GWWC member as of the time of the survey, and being an EA before the time of their donations, despite not being a GWWC member at the time of their donations. Thus not donating 10% in that year would not be breaking the pledge, because they had not taken the pledge yet.

Another factor would be that while we filter out people who report being students as of the time of them taking the survey, it’s possible (and, given the age of EAs, quite likely in many cases) that they were a student at the time of the donations. Thus they would only need to meet a lower pledge of 1% of spending money, rather than 10% of income.

Table 8 shows us that, predictably, those joining EA in 2018 have very low pledge adherence as they were overwhelmingly likely not to be GWWC members at the time of their reported donations. This is why we have excluded them from our analyses elsewhere. Beyond that, we see a similar trend as before, and again trend tests lead us to conclude, with a very low risk of being wrong (lower than 1.44%), that there is a linear trend in the proportions. 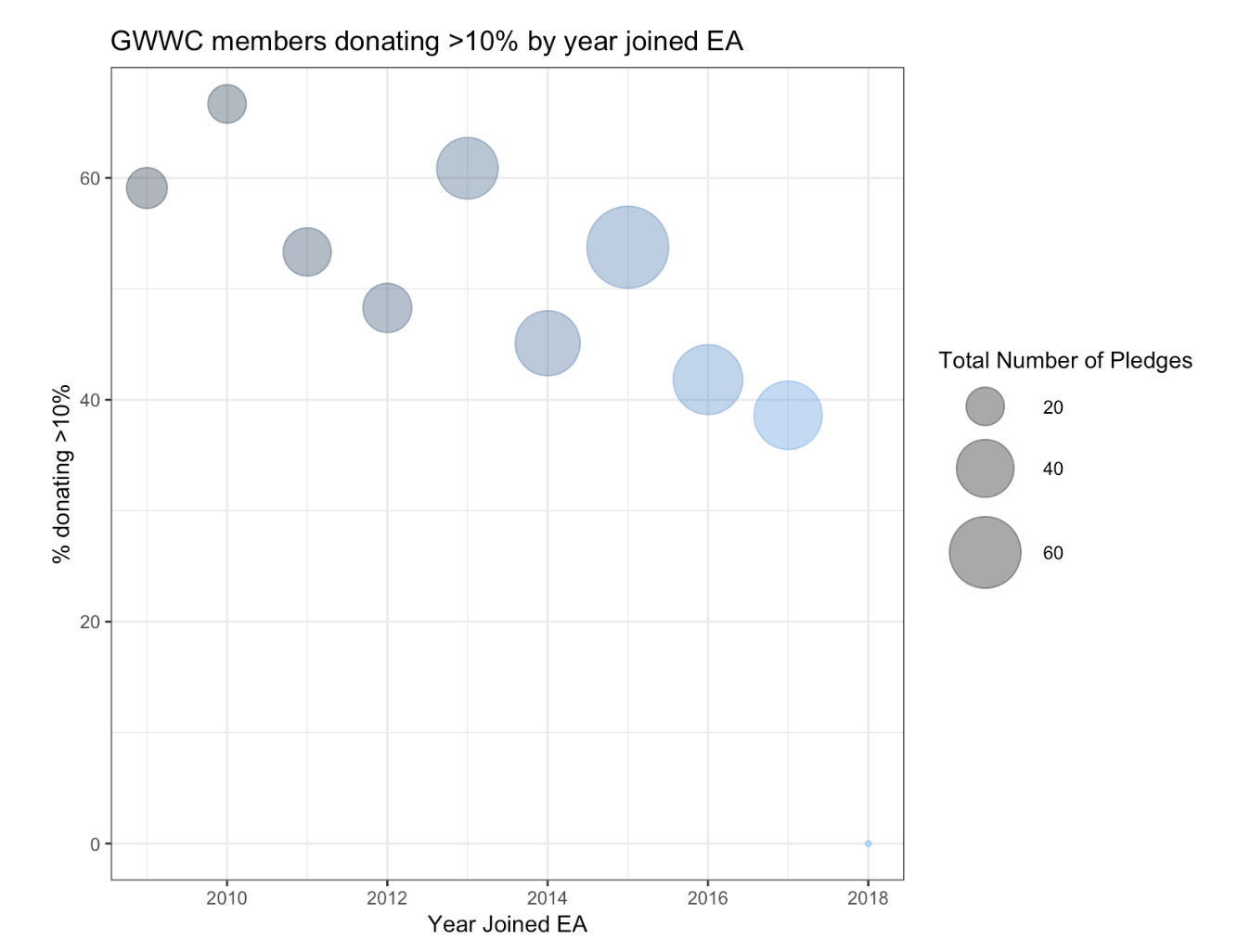 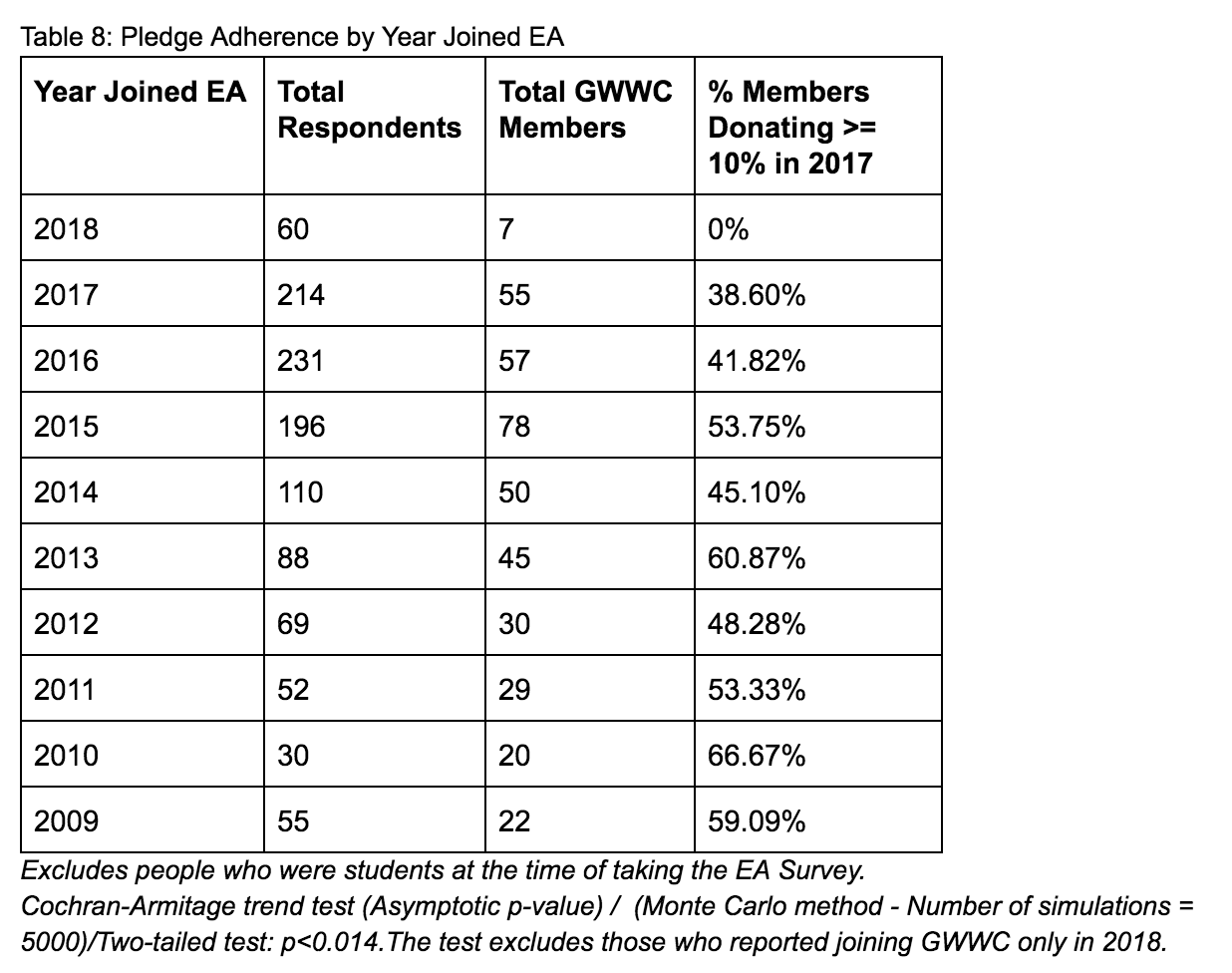 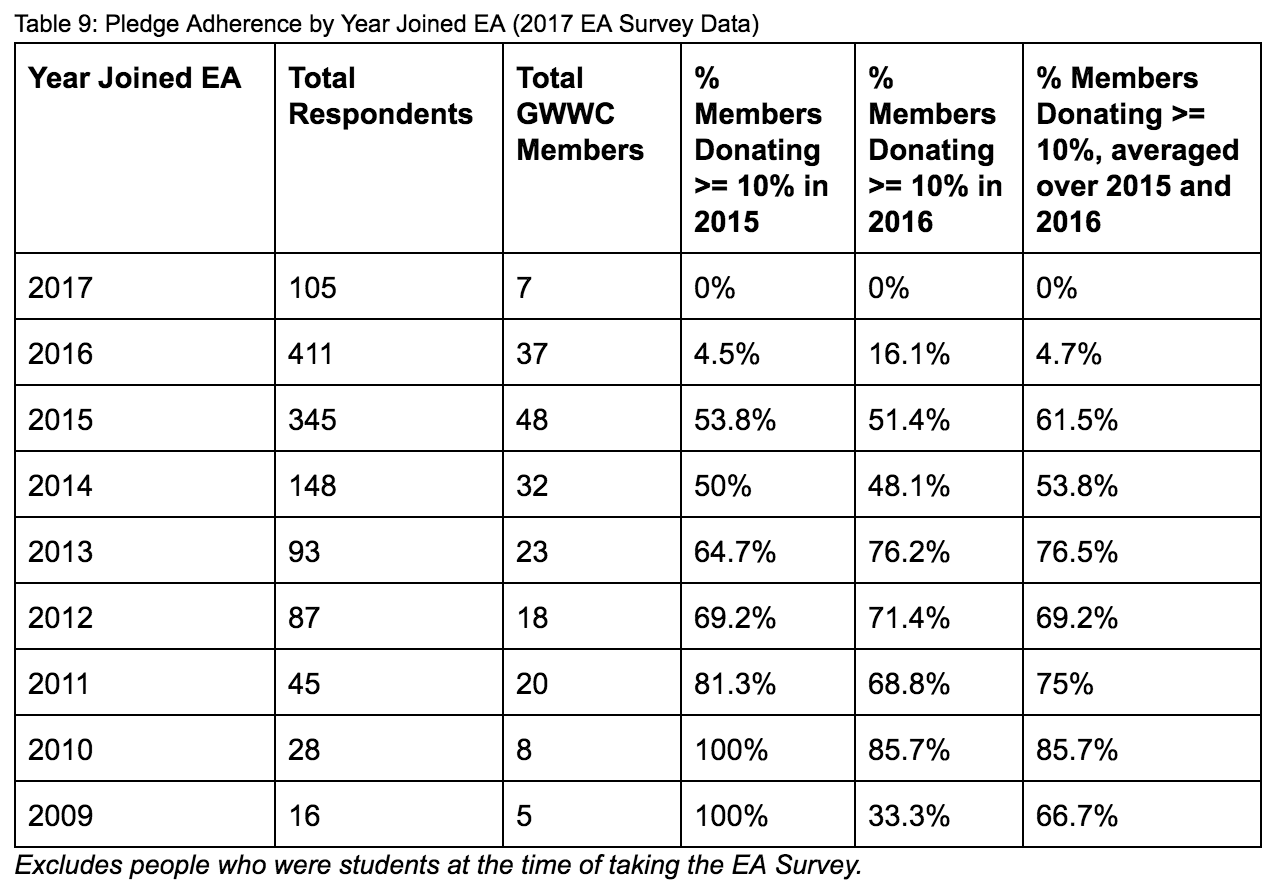 This trend is likely the case due to a variety of potential factors, including but not limited to:

Looking specifically at that third factor (confounding by age), we look to Table 10 and Table 11, which seems to show a discernible trend of pledge keeping increasing as age increases, and trend tests lead us to conclude that there is a linear trend in the proportions[7]. However, while statistically significant, it does not hold up to a stricter multiple comparisons check[8]. 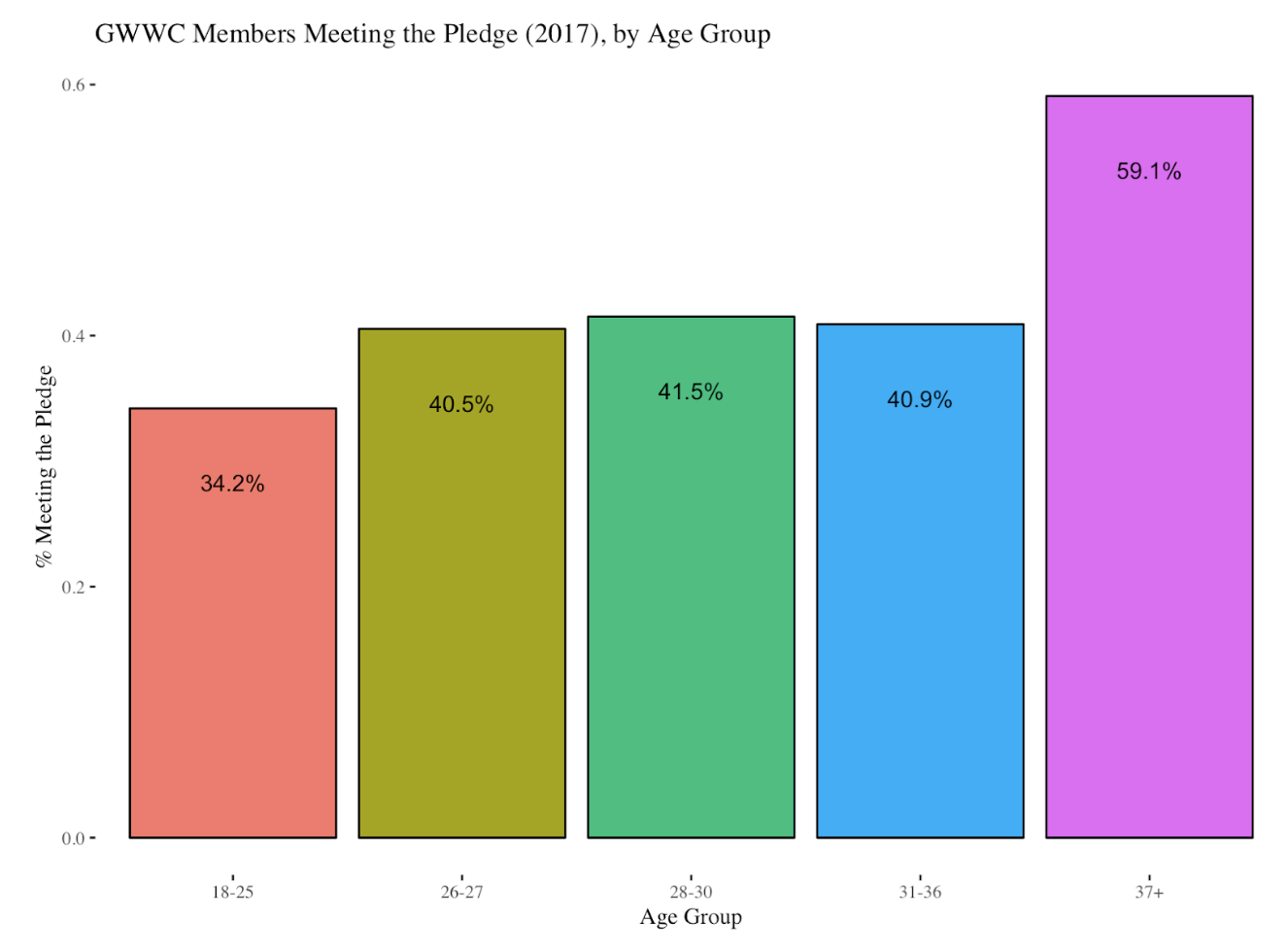 Are People Mistaken about Being GWWC Members?

One question is whether people who are not reporting keeping the pledge are just mistaken when they self-report being a GWWC member - maybe they took the smaller “Try Giving” pledge which does not have a 10% commitment or maybe they didn’t pledge at all. To check this, I cross-referenced the list of names I have of GWWC members in the EA Survey with GWWC’s member roster. In the 2018 EA Survey data, I found 190 self-reported GWWC members who joined before 2017 and gave their name[9] plus enough information to determine if they kept the pledge in 2017. Of these people, 69% of them were keeping the pledge. Of the 59 identifiable non-pledge keepers, 48 (81%) of them were identifiable in the roster. I also selected a random subset of 50 identifiable pledge keepers and found 46 (92%) of them in the roster. Based on this, people being mistaken about whether they are GWWC members is a possible explanation for a small fraction of people missing the pledge but still leaves a substantial fraction unexplained.

What Predicts Keeping the Pledge?

When looking at factors that best predict whether one will keep the GWWC pledge, the most important factor that emerges is income. The EA Survey looked at both individual and household income (e.g., a couple filing taxes jointly). Here, we chose to look at individual income. As seen in Table 12 and Table 13, there was a strong relationship (logistic regression average marginal effect of 11% p<0.0001) between income brackets and pledge adherence. This is also the case when looking at continuous income data where individual income is correlated with giving 10% or more (Point-Biserial r = 0.1480, p<0.03). 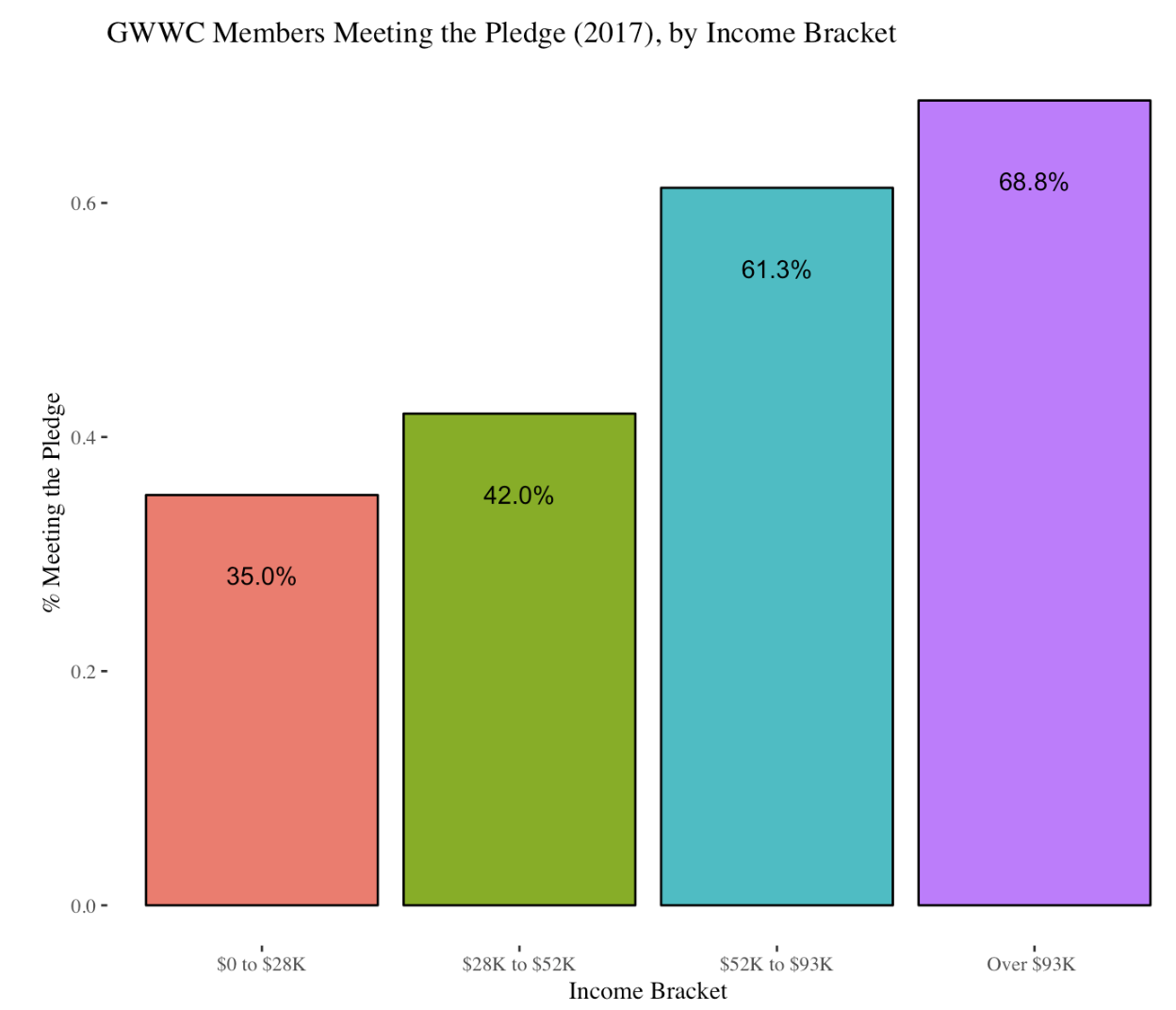 However, this may be the result of some confounding where people in some job categories are more likely to be engaged EAs. Additionally, one would think that those self-identifying as taking an “Earning to Give” career are basically defining themselves by donating money, so they would be more likely to keep the pledge. 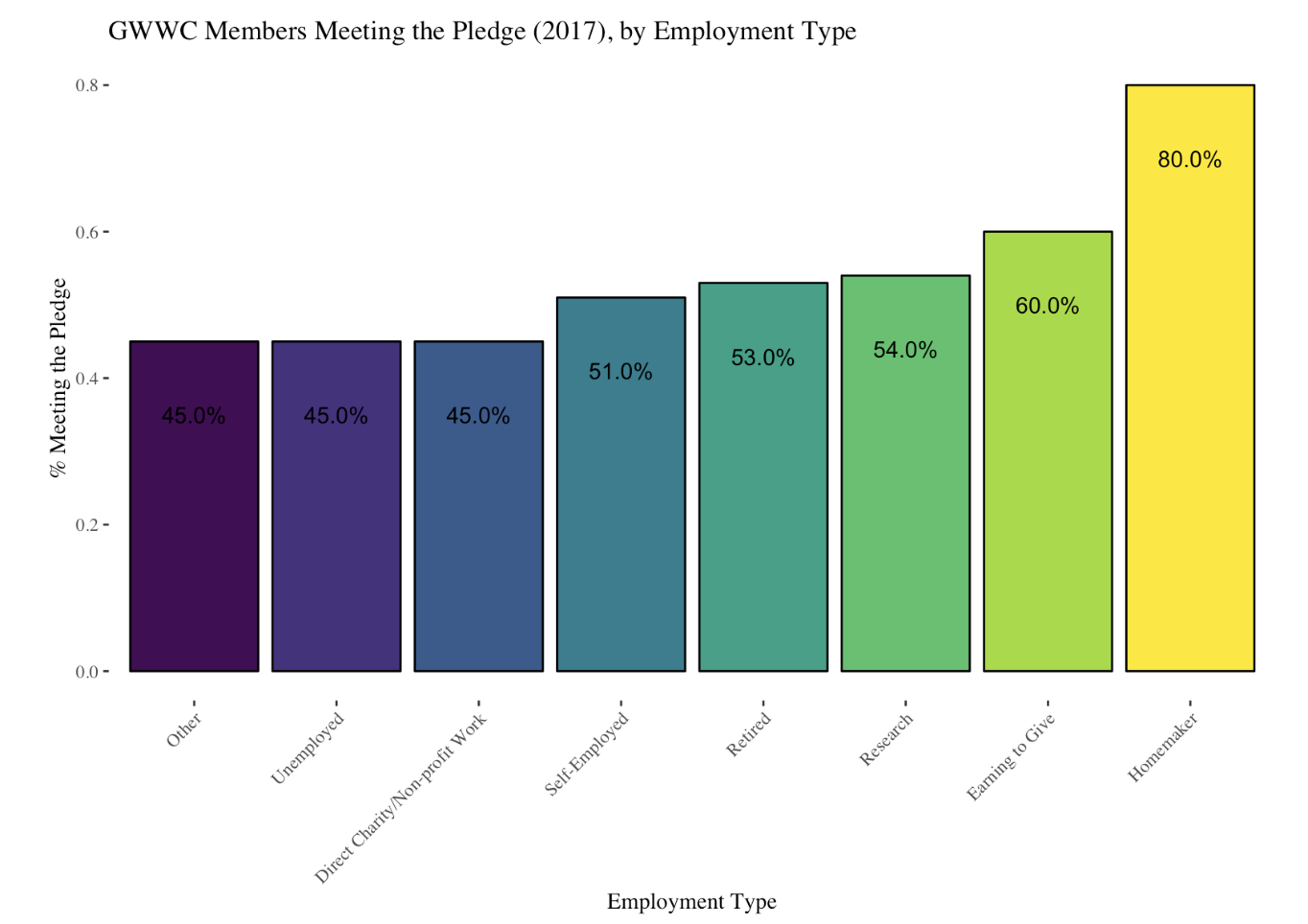 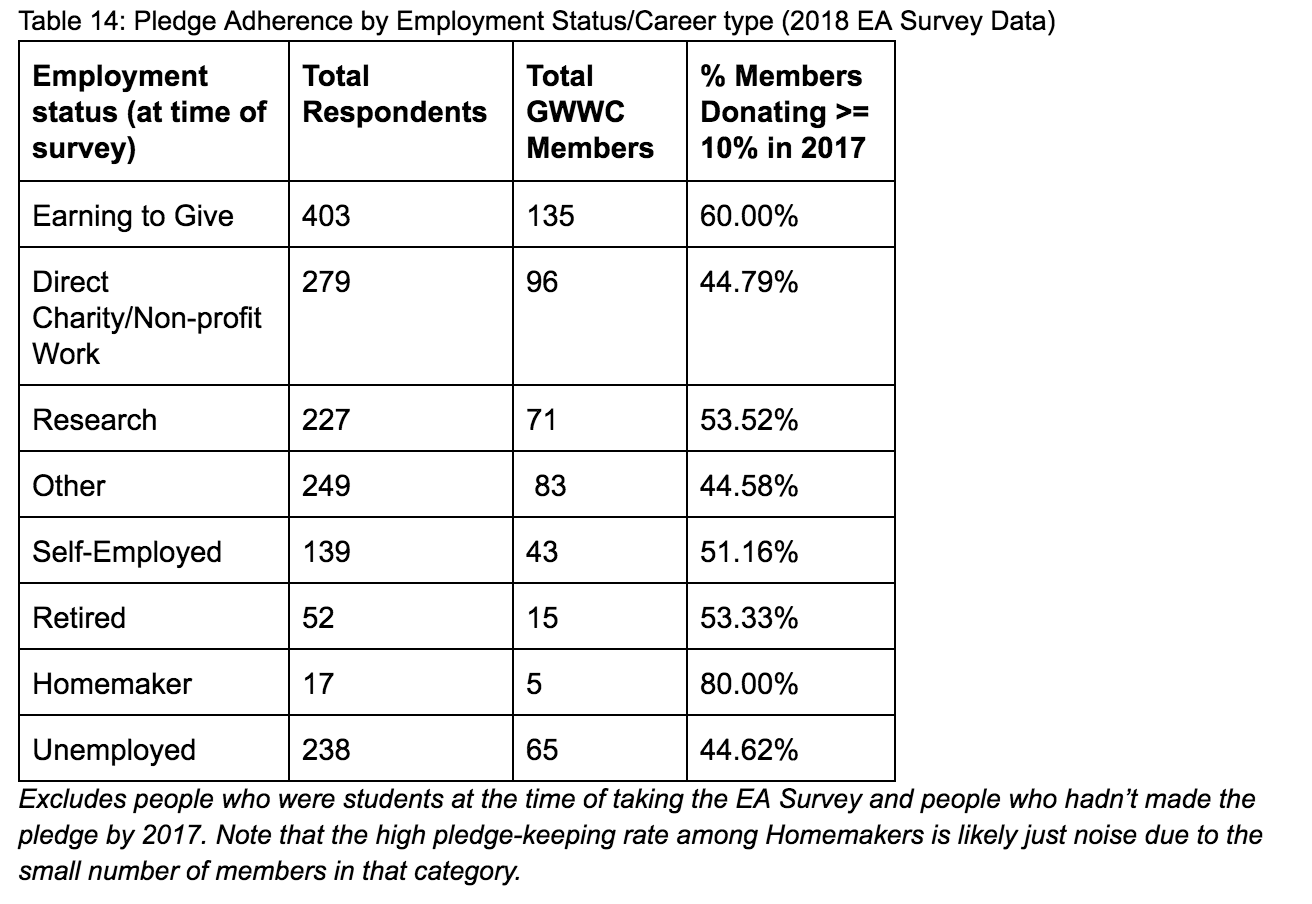 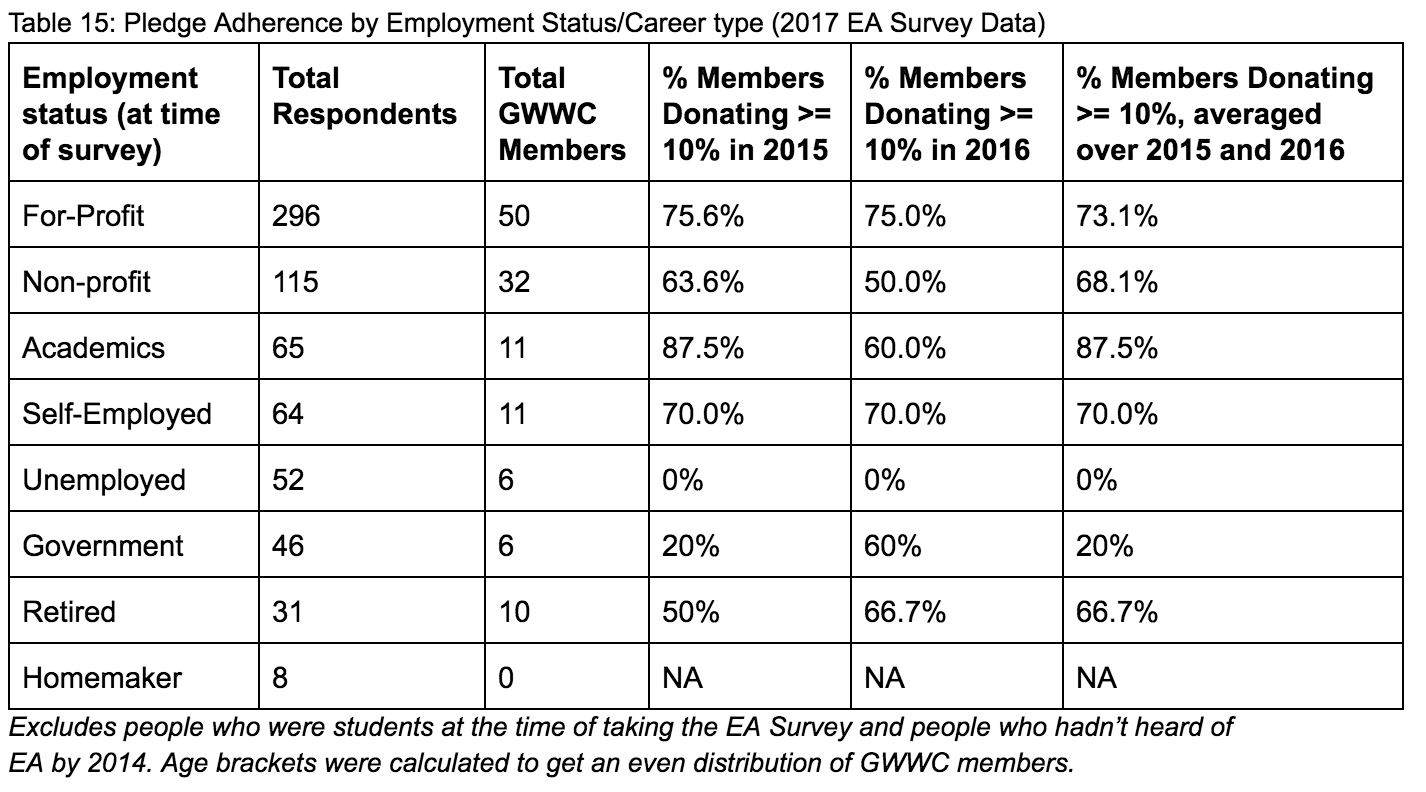 It is important to note that members who are not meeting their pledge are still, on average, donating more than their non-member counterparts. We find that of the non-students who donate less than 10%, those reporting GWWC membership donate 4.5% on average, compared to a 2.4% average of non-GWWC members who are not students and donate less than 10%. This difference is statistically significant (t-test, p < 0.0001).

Based on data across multiple EA Surveys, it does appear that a proportion of GWWC members are not reporting donation data that is consistent with keeping their pledge, and that this proportion is much larger than would’ve been expected. GWWC originally reported in 2014 an annual membership attrition rate of ~4.8%, however we record ~40% of the sampled GWWC membership population as not keeping their pledge in any particular year (not to mention EAs who drop out of the EA Survey altogether [EA · GW][11]). A variety of attempts to explain away this trend do not appear adequate enough, though we cannot fully rule out some sampling or other methodological issue in calculating this conclusion.

Despite this, GWWC members do donate more than non-GWWC members (though this difference is only statistically significant in 2017 and not in 2015 or 2016 because there is very high variability in donation amounts) and GWWC members donate more as a percentage of income than non-GWWC members (this is statistically significant). Together with provisional data on EA retention [EA · GW] and EA growth rate [EA · GW], this could be taken to be a springboard for further discussion and analysis of how people join and leave the effective altruism movement. We hope to continue to explore this in the forthcoming 2019 EA Survey and we’d appreciate your feedback.

This post is part of the supplementary posts for the EA Survey 2018 Series. The annual EA Survey is a project of Rethink Charity with analysis and commentary from researchers at Rethink Priorities.

Previous articles in the EA Survey 2018 Series include:

Prior EA Surveys include:

The 2015 Survey of Effective Altruists: Results and Analysis [EA · GW]

The 2014 Survey of Effective Altruists: Results and Analysis [EA · GW]

If you like work from Rethink Priorities, please consider subscribing to our newsletter. You can see all our work to date here.