Announcing PriorityWiki: A Cause Prioritization Wiki

This essay was jointly written by Peter Hurford and Marcus A. Davis.

Locating and keeping up to date on all of the information in all every cause worthy of attention is time-consuming work, and a task we think is likely to be duplicated many times over by individuals and organizations. It’s very useful when deciding what interventions to spend your time or money on to know what work has already been done in the area.

However, much research is done and then lost to the sands of time, buried on some webpage somewhere. It takes significant effort to remember where all the relevant research lives. It would be nice to synthesize all of this research into one place.

This is why we’ve created PriorityWiki, a cause prioritization wiki anyone can edit which categorizes particular interventions within broader causes. For each of these interventions and causes, we link out to high-level summaries on the topic that have been done within (and outside of) the broadly defined effective altruism community. From there, you hopefully have a good launching pad to all the relevant research in any topic.

We’ve seeded this wiki with intervention specific links to work from Open Philanthropy, GiveWell, 80,000 Hours, Animal Charity Evaluators, and others on a wide range of topics. For example, within the the high-level of cause of “Developed World Health”, we’ve further subdivided the page into the type of intervention and link out to specific reviews into anti-malarial interventions, vaccinations, smoking interventions. 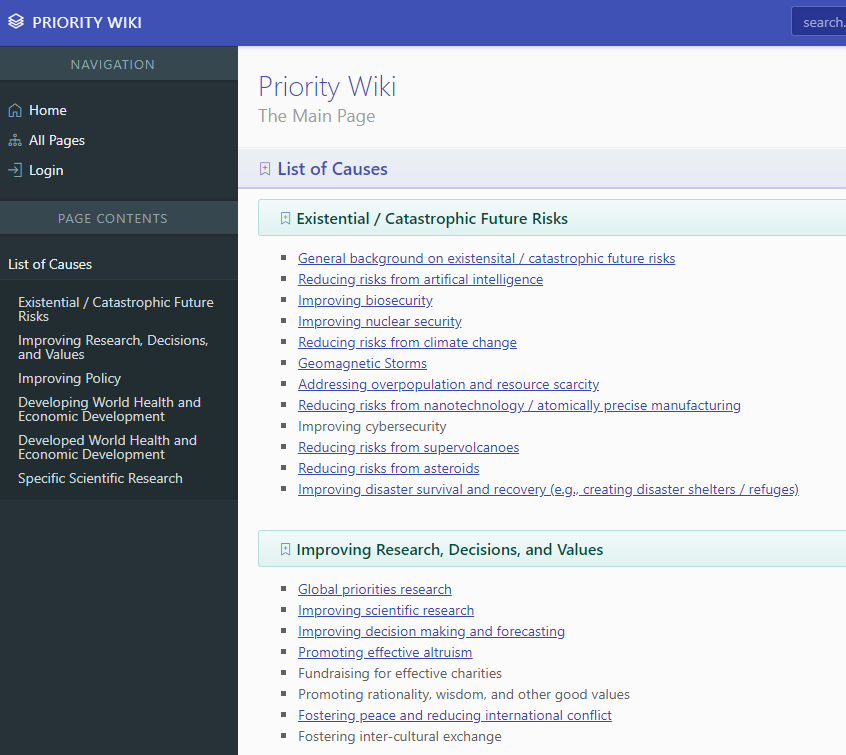 While we have seeded the wiki with initial content, it is not currently comprehensive in any cause area and doesn’t include all plausible interventions. We would like for this wiki will serve as a resource to quickly locate and investigate what work has been done on all causes. We would hope that it will at least significantly reduce some of the time-consuming work of trying to gather what research has been done on intervention ideas.

The wiki is editable by anyone without logging in but also supports accounts, and signing in with Google. All of the changes are logged publicly on GitHub with the site itself hosted here and specific pages here.

If you’re interested in expanding this, you are free to add content. Just get started at the PriorityWiki.