Baitfish are small fish that are sold to recreational fishermen, who usually impale them on a hook and use them as live bait for bigger fish. In this article, I discuss why I think that lobbying for stricter baitfish regulations in the U.S. can be an effective intervention.

I was able to find very little evidence of animal activism directed towards stricter baitfish laws. The issue seems to be very neglected.

Live baitfish use is prohibited in some parts of Europe, Canada and the U.S. due to concerns about invasive species, spread of diseases, and animal rights. This is an indication that lobbying for stricter regulations could be tractable.

If the use of live baitfish was prohibited, some anglers would likely use artificial baits instead, but some would choose to use worms, leeches, or other animals as live bait.

Number of baitfish raised in the U.S.

Different sources seem to provide somewhat conflicting numbers about the number of baitfish that are sold and produced annually. They range from 1 billion to over 10 billion:

I haven’t found any articles citing The Census of Aquaculture figure which makes me doubt its accuracy. The six billion figure for Arkansas from Stone et al. 1997 is widely cited. However, it could be outdated, especially since the industry seems to be on the decline.

Conflicting figures are partly explained by Gunderson and Tucker (2000):

“Current and accurate estimates of production and value of baitfish in the U.S. and the NCR are not available. The lack of accurate production estimates is the result of inconsistencies in reporting, different methods of reporting (i.e., gallons, dozens, pounds), use of different common names for the same species across the region, and difficulty in separating cultured baitfish from wild harvested baitfish.”

When it comes to the number of individuals, the baitfish industry is comparable to the foodfish industry. U.S. food consumption is responsible for farming of 3.9–7.8 fish per year per capita, excluding shellfish. 1–10 billion baitfish produced annually translates to 3-31 baitfish produced per year per capita. However, food fish tend to be much bigger and raising them usually takes slightly more time.

The industry seems to be on the decline

Looking at data from Fisheries of the United States reports and the 2013 Census of Aquaculture, the baitfish farming industry seems to be on the decline: 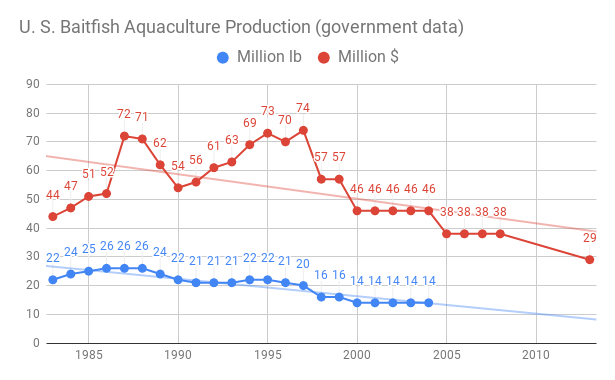 This observation is based on the same government data that was criticised by Gunderson and Tucker (2000), so it’s unclear how much it can be trusted. It’s also unclear whether all the censuses collected data in a consistent way. For example, 2005 included 335 million feeder goldfish into baitfish calculations but the 2013 census did not. According to Gunderson and Tucker (2000), “some goldfish enter the baitfish market, but a large part of the production is used for feeding aquarium and pond fish and do not constitute baitfish production.“

Reasons for the presumed decline are unclear. One possible reason is the increasing burden regulations (see Senten and Engle (2017) and Hilts (2018)). bait-up.com claims that baitfish "are used less and less by anglers for three simple reasons. First, it is becoming more difficult to find bait shops who carry minnows. Second, there is additional time required to keep them alive before and during your fishing trip and third most live bait storage containers are hard to use efficiently while fishing."

If the baitfish industry really is on the decline, it decreases the importance of the cause. However, it may also increase tractability. The involvement of animal rights groups may be the final push that causes the industry to collapse or prevents it from recovering. It may also prevent implementing plans to increase the scale of saltwater baitfish aquaculture (currently most of the farmed baitfish are used for freshwater fishing).

I have found very little information about baitfish farming for recreational fishing outside of the U.S. Carole and Kwamena (2008) claim:

“Fish and crustaceans are raised and sold as bait all over the world. However, baitfish production in most countries is either small scale, incidental, or simply serves to sell fish that are too small to meet foodfish market requirements. However, the U.S. baitfish industry provides an example of baitfish production that has been developed into a large and important industry”

Using fish as live bait is already prohibited in some U.S. and Canadian states. Many other states have import and movement restrictions. An overview can be seen in Kerr (2012). More detailed information about laws in each state can be found in this table.

In Scotland, it is prohibited to use any live vertebrate as bait. Some of the discussion leading to the prohibition can be found here and here. Switzerland seems to have a similar regulation. In Poland, Denmark, and the rest of the UK, it is only allowed to use baitfish that is caught in the same waters it is used. As I understand, this practically eliminates the possibility of a baitfish farming industry.

What has been done

It seems that the main motivation for existing restrictions is preventing the transfer of fish species and diseases between water bodies, rather than animal cruelty. Overall, I was able to find very little information about any animal rights activists fighting for stricter baitfish laws:

I haven’t found any indication of activism in the U.S. Gunderson and Tucker (2000) claims:

“Apparently in Europe, because of strong animal rights sentiments, the use of live fish for angling has been eliminated or severely restricted in some areas. The impact of the animal rights movement on the future of baitfish aquaculture in the U.S. is not predictable, but it could present problems for fish farmers in the future”

Based on my investigation, I think that an intervention in this area could be effective. I would like to know whether or not other people agree. I am also unsure how to proceed if we were to conclude that it was a promising opportunity. Maybe with some lobbying the outcomes of some baitfish-related policy disputes (like this one) could influenced. However, I don’t have resources or expertise to do anything about it myself. I thought I could send this text to some U.S. animal charities and ask if they would be interested in pursuing the opportunity. Suggestions about what to do would be welcome.

If some action were taken, I think we should be sensitive to the fact that the baitfish industry is the source of livelihood for many well-meaning people.

[2] Similarly, this documentary claims that “baitfish sales can fluctuate wildly” and that “the weather on four or five weekends in the spring can determine the profitability of the baitfish operation for the entire year.”

[3] The article cites PETA’s employee Yvonne Taylor. If needed, maybe she could be contacted for more information.

Gunderson, Jeffrey L. and Tucker, Paul. 2000. A White Paper on the status and needs of baitfish aquaculture in the North Central Region.

I warmly thank Kieran Grieg for providing suggestions and comments on this post and Annie Alexander-Barnes for copy-editing.