Audience: I expect this to be helpful for anyone thinking of running a similar survey, and probably not interesting for anyone else.

We ran a survey [EA · GW] of prominent AI safety and governance researchers which aimed to identify which AI existential risk scenarios those researchers find most likely. We learned several lessons that I expect to generalise to surveys with a similar audience or aims (e.g. surveys aiming to understand researchers' views in some field, or to test hypotheses about EAs' beliefs on certain issues, etc.). I've had several conversations where I've repeated these same lessons, so I figured I'd write them up quickly.

"Walkthroughs" are a good way to improve the questions

Before launching the survey, we iterated on the questions via a series of about 10 "walkthroughs". Each "walkthrough" involved being on a call with someone (a "tester") who would complete the survey, while verbalising their thought process and any thoughts that came to mind on what was confusing/could be improved, and so on. We did this until the survey design started to stabilise, i.e. the testers were basically happy.

Compared to asking testers to complete the survey in their own time and email us with feedback, this generated much richer and more helpful information. It was also lower effort for the testers (no need to write up their thoughts afterward). It’s also likely that people forget some of their feedback by the end, so it’s better to collect it as they go along.

The most helpful testers were those who we would want in the survey population, which (for our small population) posed a limitation on the number of tests we could do, so using tests wisely is important.

Testers are good at identifying flaws, but bad at proposing improvements

During these walkthroughs, testers reported things they didn't like about the current design, and sometimes suggested improvements to fix those flaws. Whilst the flaws that testers identified robustly pointed to areas that could be improved, more often than not, testers' suggestions on how to address the flaws weren't that helpful. In particular, several times we had the experience of making a change that one tester suggested, only for the next tester to suggest reverting to the previous design. (If you're interested: whether to make the AI risk scenarios mutually exclusive.) So, we found that suggested improvements should be taken as evidence that something was bad about the current design, and less as evidence that the particular change they suggest will actually make the survey better.

I'm told that this mirrors common wisdom in UI/UX design: that beta testers are good at spotting areas for improvement, but bad (or overconfident) at suggesting concrete changes.

Include relatively more "free-form" questions, or do interviews instead of a survey

Regarding the type of survey questions, there is a spectrum from "free-form" to "specific". Here are examples of questions on either end of the spectrum:

Specific questions ask for a response to some precise question, whereas free-form questions just prompt the respondent for their reactions to some vaguer question.

In our survey, most questions were very specific and asked for probability estimates. We expected this would make the analysis easier, because we could simply report summary statistics of these estimates, rather than having to synthesise and draw conclusions from a range of qualitative answers (which tend to be confusing because survey participants always write quickly!).

However, in hindsight this wasn’t clearly the best choice, because asking specific questions requires a level of conceptual precision that wasn't available for many of our questions.

By conceptual precision, I mean that the survey question uses concepts that pinpoint some specific idea, rather than a vague category (e.g. vague "existential catastrophe" vs. specific "at least 10% reduction in the value of the future"; vague "X happened because Y did" vs. specific "X would not have occurred unless Y did"). Lack of conceptual precision makes it possible that different respondents were essentially answering different questions, because they were using different interpretations of the vague concept. To make matters worse, failures of this kind can be “silent”, in the sense that we (as the survey conductors) don’t even realise that different people are answering different questions, and aggregate results as if they were not.

(One might think that we could have resolved this by just using more precise concepts, but I think that wouldn't be the correct lesson to draw. For many of the concepts that our questions relied on, there just aren't (yet) ways of carving up the conceptual space that we expect would have been agreeable to the vast majority of participants. For example:

A complementary lesson is to consider conducting a series of interviews, instead of a survey. I’m not sure whether this would have led to more useful results, but I think we should definitely have considered it more carefully. Interviews have several benefits over surveys:

Of course, interviews don’t scale as well as surveys. That is, doing an additional interview takes more time (for the organisers) than sending the survey to an additional participant. However, in cases where the survey population is relatively small (e.g. AI safety/governance researchers), it’s possible that interviewing a substantial fraction of the population would actually take less time overall, because you don’t need to spend as long perfecting the questions before you send them out. And if (like us) you’re inexperienced in distributing mass surveys, there’s actually a bunch of overhead (and stress!) associated with doing that, which you can avoid.

A related idea is to consider using something like the Delphi Method.

Preregistration is important for the validity of results

Best practice in social science is to preregister your hypotheses and methodology for testing them, before you go out and collect data. Here's one intuition for why this is important: if you look at all the data, then generate hypotheses, then devise tests for them, it's highly likely your hypotheses will be true, because you used the data to generate them! In other words, there are lots of choices you can make in analysing data, and - if you don't precommit to particular choices - then you can make choices that favour your conclusion. Yet another way of saying this, borrowing concepts from machine learning, is: if you don't separate your training and test sets, you shouldn't expect your model/predictions to generalise at all.

We didn't do preregistration, which is reason to be somewhat more sceptical of our conclusions. We discussed this in our document about the limitations of the survey.

To be clear, this lesson only applies to the extent that you're trying to draw conclusions from your data which are wider than simply "these are the probability estimates (or whatever)".

Another upside of preregistering your methodology in particular is that it forces you to be explicit about how you’re planning to analyse the data and draw conclusions. Personally, I think I was mostly relying on being able to just boggle at the results and hope that some interesting findings would emerge.

We actually ended up getting away with this one, but only after two very expensive iterations of boggling, writing up conclusions, and (on the first iteration) getting feedback that the conclusions were flawed. And even then, I think we got a bit lucky that there were some pretty clear patterns.

If I ran another survey, I'd want to have a clear methodology in mind for going from results to conclusions. Ideally, I'd want to stress test this methodology by collecting ~10 responses and running it - probably you could just simulate this by going through the survey 10 times, wearing different hats.

It took a while to spell out exactly what results/summary statistics would be made public in a way that was acceptable to all participants. Be prepared for this.

Also, we promised participants that only the three of us running the survey would have access to the raw results, which ended up being frustrating and limiting when we realised it would have been helpful to bring a couple more people on board to help with results analysis.

We spent a lot of time working out how to elicit participants’ levels of uncertainty about their responses. In the end, we took a simple approach that worked well: just ask, “How certain are you about your responses to the previous questions?”, and provide seven numerical options between 0 and 6. “0” was labelled “completely uncertain, I selected my answers randomly”, and “6” was labelled “completely certain, like probability estimates for a fair dice”. See below for an example. 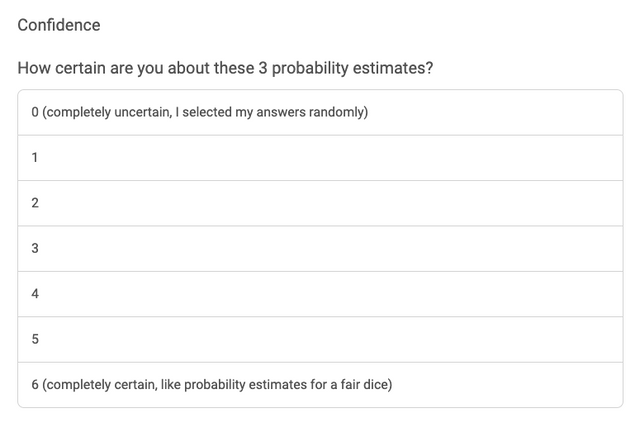 Other small lessons about survey design

These are lessons that we did incorporate into the survey design, which come from a valuable conversation with Spencer Greenberg.

[ETA: one commenter [EA(p) · GW(p)], who is knowledgeable about surveys, disagrees somewhat with the first, second and final points in this section.]

Probably, the most generalisable lesson we learned is more meta: if you're thinking of running a large scale survey, you should seriously consider having at least one person on your team who has experience with surveys. We didn't, which meant we learned a lot, but it plausibly caused more mistakes and hassle than it was worth.

Thanks to Alexis Carlier and Jonas Schuett for helpful feedback on a draft.