Summary and Takeaways: Hanson's “Shall We Vote on Values, But Bet on Beliefs?”

Robin Hanson’s “Shall We Vote on Values, But Bet on Beliefs?”[1] is a foundational paper that outlines some ways to use prediction markets for policy and introduces the idea of futarchy, a form of government that puts prediction markets in charge of accepting and rejecting policies. Prediction markets are potentially promising for improving policymaking [? · GW] and institutional decision-making [? · GW] because they align the incentives of their participants with the main goals of the system by directly rewarding participants for accuracy. They also aggregate the information better than most other systems, like polling or voting. Prediction markets have a good empirical track record of producing accurate forecasts.

If you have already read Hanson’s paper, you may wish to read the section of the post called “Key takeaways and some issues with the proposals.” If you choose to read parts of the expanded outline, you may find that sections 8, 9, and 11 are the most informative.

I read this paper as part of a project on prediction markets at Rethink Priorities, where I am interning this summer.[2] If you find inaccuracies, misunderstandings, or misinterpretations on my part, I would appreciate it if you would let me know, as this is both useful for improving this post and for my overall project.

Proposals in the paper

In this paper, Hanson:

What is a decision market?

If an entity (e.g. a company) needs to make a big decision (e.g. choosing a new store location), it has different means of collecting information to inform this decision. The entity could consult experts, it could run trials, it could poll its own local employees, etc. It could also run a decision market or a prediction market to aggregate a group’s collective knowledge on the topic in a way that seems to outperform polling. To do this, the entity would host bets on whatever outcomes interest it (e.g. profits), and make these bets conditional on the different options that are available (e.g. a shortlist of locations). This involves setting up contracts that are rendered void if an option is not picked in the end.[4] The entity can then extract information from the prices that naturally emerge for contracts that are conditional on different options, and use that information to come to a decision on the topic.[5]

A hypothetical example of a decision market

Suppose a company is opening a new store, and wants to open it either in Arcadia or in Boston. The company can set up the market by declaring some incentives (like a fake currency) and encourage bets on the outcome of opening the store in Arcadia or in Boston (bets that the company will enforce). The company might announce that “shares of Arcadia” or “shares of Boston” are contracts that will eventually be worth N of the currency unit, where the value of N depends on the future net revenue from the corresponding store. The company will pay out Arcadia contracts at a specified time if Arcadia is chosen (in which case all trades about Boston will be reversed), and it will pay out Boston contracts if Boston is chosen (in which case Arcadia contracts will be reversed).

Now suppose two employees disagree about how much a store in Arcadia would bring in profits, and therefore about what one should pay for a share of Arcadia. Xander thinks that a share of Arcadia will be worth 80 units (ie. he thinks N will be 80), and Zoe thinks that a share will be worth 100 units. Conditional on a store being opened in Arcadia, Xander should be happy to owe the company N units if he receives, say, 95 units now. (He expects to earn 15 units off this trade, if a store is opened in Arcadia.) Similarly, Zoe should be content to exchange 95 units for a share of Arcadia. (She expects to earn 5 units off this trade.)

As more people make such trades, the market price should stabilize, and shares of Arcadia or Boston should have relatively stable prices. Suppose that Xander was correct, so shares of Arcadia are worth around 80 units. Also, suppose that shares of Boston are worth around 120 units. This implies that the market—or the collective mind of the bettors—expects that the revenue from a store in Boston will be greater than revenue from a store in Arcadia. As a result, the company might choose to open a store in Boston, not Arcadia. (And all Arcadia-conditional trades get reversed.)

Hanson offers two small-scale proposals for using decision markets for policy— a very simple one and a more complicated one.

Hanson presents these as relatively ready-to-go options that can also help prepare the world for his large-scale proposal. For more on the small-scale proposals, you may also want to see sections 5 (“Corporate Governance Example”) and 6 (“Monetary Policy Example”) of the paper.

In section nine of his paper, Hanson outlines his vision of futarchy. Under futarchy, policies get adopted if and only if decision markets imply that the policy is likely to improve a measure of national welfare. What goes into the “official measure of welfare,” which can be thought of as an augmented version of GDP, is determined by national vote. (Hence the title, “Shall We Vote on Values, But Bet on Beliefs?”)

Under this system, legislatures pass bills on the creation and management of national welfare, on their own internal procedures, and on the process by which legislators are chosen. A proposed policy must clear some qualification tests and follow an agenda process. Finally, the markets (futarchy markets) decide whether to adopt the policy in the manner described below. 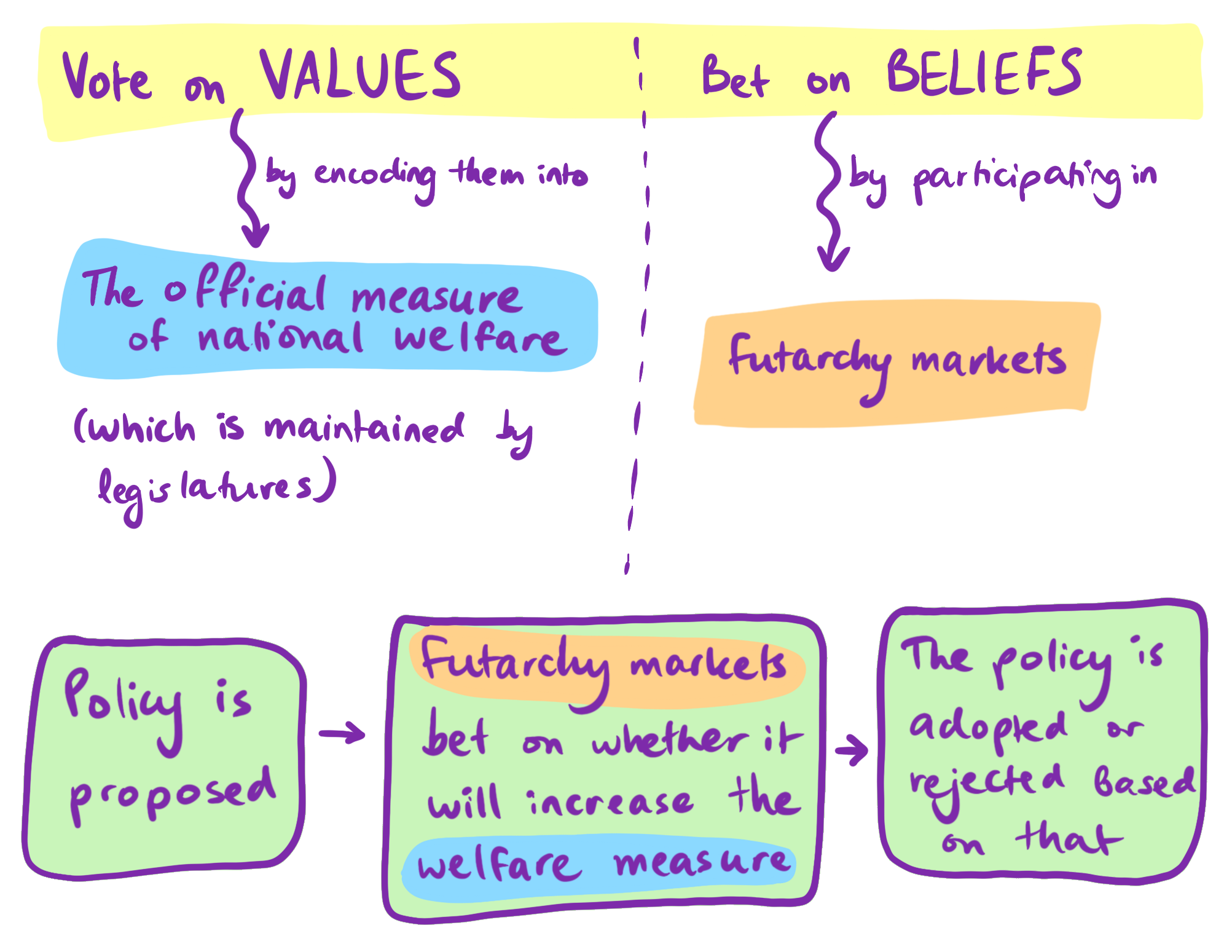 A base asset (an alternative to money, like a bond or stock index fund) is defined. A second asset, the “welfare asset” (or “welfare future”), is created; the value of this asset is related to the official measure of welfare at any given time. Depending on what they want to do and their forecasts about the official measure of welfare, people can trade the welfare asset in exchange for the base asset.

(The system is actually more complicated. For instance, policies that traders think will seriously harm welfare as it will be defined in the future get vetoed to provide a sanity-check. Note also that the fact that traders can also buy shares of the welfare asset conditional on the policy not happening makes the system purer and less dependent on estimates of whether a policy will be adopted.)

A simplified worked example of trading in futarchy

Trader Joan is considering whether to bet on a Policy P. Suppose that national welfare is currently evaluated at something that translates to 100 of our base asset unit (BA); if you own a “welfare asset,” you can exchange it for 100 BA. Joan believes that things are generally going downhill right now, so the welfare asset will be worth 65 BA if nothing changes. But she also believes that Policy P could really turn things around, and welfare would actually be at 140 if P were adopted. So she believes that, conditional on P being adopted, the welfare asset should be valued at around 140 BA. In theory, then, Joan should be willing to commit to buying shares of the welfare asset conditional on P (which we can also call “shares of P”) for anything below 140 BA, and to selling shares of P at anything above 140 BA.

Let’s say that Joan makes a trade with Trader Henry who thinks that Policy P will actually only bring things up to 100 and is thus willing to sell shares of P for anything above 100 BA. Let’s say that Henry sells a share of P to Joan for 130 BA.

If P is rejected, then the bet is void. If, however, P is adopted, then shares of welfare conditional on P simply transform into some amount of the welfare asset. Joan will be able to cash in her share of the welfare asset for however much it is worth at that point. If it turns out that she was right, and P’s adoption has brought welfare up to 140 BA, then Joan has earned 10 BA in the process— a reward for being right in her prediction about P’s potential.

Some time after trades on P open, the “market price” of a share of P, or the “fair value” of a share of P,[6] should emerge. If people tend to think that P is likely to be very good, this market price should be high; they might collectively decide that paying 125 BA for P is “fair”. A similar market will be run on shares of welfare conditional on P being rejected. In this example, if Joan’s estimate was close, these shares should cost around 65 BA each.

Key takeaways and some issues with the proposals

Use of prediction markets for policy can be split into two different kinds:

At their core, both of these align personal and global incentives by rewarding participants directly for making good predictions that benefit the nation or the organization. But both kinds of prediction markets for policy also have issues. Broadly, my impression is that the first system (advisory markets) has the potential to be very useful, but is not quite capable of taking full advantage of the power of markets to aggregate information. Putting decision markets directly in charge of policy decisions has some benefits, like eliminating intermediaries between the information the market provides and the decisions themselves. However, it also has more risks, some of which I note below, and many of which I will describe in a future post.

Issues with the proposals

Hanson should be commended for listing 25 objections within the body of the paper itself, although he seems to be too casually dismissive of some of them (possibly due to length constraints). Below are some issues to which Hanson’s paper gives no attention or gives less attention to than I believe is warranted:

Misconceptions: below are also a couple of things that might first seem like critical issues, but which do not actually pose risks to futarchy (in theory).

Two outlines of the paper

This document contains an expanded outline of the paper (with some commentary and notes).

Also, below is a very sparse outline.

Part 7. The engineering of institutions (p17)

This essay is a project of Rethink Priorities.

It was written by Lizka, an intern at Rethink Priorities. Thanks to Robin Hanson for the source material and some feedback, and to Eric Neyman and Scott for conversations about prediction markets and futarchy. Thanks also to Michael Aird, Marie Buhl, and Linch Zhang for their extremely helpful feedback. Any mistakes are (still) the fault of Linch Zhang, my supervisor. If you like our work, please consider subscribing to our newsletter. You can see all our work to date here