Knowing that a large people donate inefficiently and that because of scope insensitivity and other thinking errors/bias/heuristics, some organisations do well by (intentionally) being inefficient. What counts is not necessarily the relative impact of cost/impact but the absolute impact.

A transparent Organization 1 focusing on increasing the cost/impact uses honest advertising but low social reward incentives therefor is able to generate 300K dollar per year. Being very efficient, per 10 dollar, one lifeyear* is saved.

Another Organization 2 focuses on increasing the number of people contributing by using extensive marketing and storytelling. For example they offer the option to adopt children, or buy children toys, etc., which increases the emotional bond and social reward for the donor. This way, the organization is able to raise 1M dollar per year. The spending of the organization is much more ineffecient (by 60% compared to the previous), only for every 16 dollar, one lifeyear* is saved.

*lifeyear is just an example, could be replaced any other metric measuring improved living or reduced suffering

From this thought experiment some could argue that it is equally (or maybe even more) important to focus on increasing the social reward, emotional bonding and ease of understanding ability of a donation, because it allows for more money being raised and more people actively donating.

Is there any research on this yet? Evaluating whether improving the cost/impact effectiveness is better compared to increasing the social reward and emotional bond to increase the total amount which will be donated?

What is more impactful in the end? What are your thoughts about that?

This does obviously not apply to government funding, but even there social reward could play a role in the sense, that the easier the cause and effect of funding can be shared and made public, the more likely there is extensive funding.

I just wanted to say that thanks to your question, I added the following bullet point to my article List of ways in which cost-effectiveness estimates can be misleading [EA · GW]:

I think that this is an important point that you raised, so thank you!

That’s a good question. I don’t know the answer but it got me thinking for a while so I’ll just ramble about what I’ve been thinking.

I remember reading somewhere (and I don’t know if it’s true) that in the UK the money spent on fundraising has been increasing but the total amount of money donated to charities has been relatively stable. So charities are competing with each other for funds more. So if one charity gets more money, others might get less. If you take it to the extreme and found a very ineffective charity that takes away funding from better charities, you might be causing harm. In general, if for the sake of simplicity we assume that the amount donated to charities is constant, it only matters how much we would change the cost-effectiveness of an average donated dollar.

Typical EA pitch says that the best charities are very many times more cost-effective than average charities. That is, that charities and interventions follow heavy tailed distributions, like the one in the graph below: 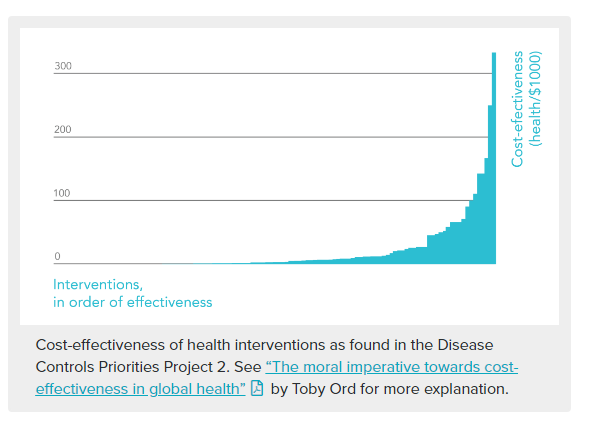 If you try to make a compromise between cost-effectiveness and social reward, etc., my intuition is that you will probably end up sacrificing cost-effectiveness a lot (e.g., by orders of magnitude) because I believe that the impact of charities follows a heavy-tailed distribution like in that graph. That said, I do believe that it is possible to have both.

Also, note that the most cost-effective charities attract different kinds of funders (e.g., EAs) with less need for fundraising beyond showing cost-effectiveness. So I imagine that the fundraising ratio for EA charities is lower than average. So far, the Effective Altruism movement has been successful in raising funds. But I think there is a cap of how much money can currently be raised this way and EA movement building is one way to increase that cap.

If you do discover an effective intervention and show that it’s effective or at least promising, it is likely to get funded by funders like Open Philanthropy. Of course, they don’t have infinite funds. E.g., according to Google, Dustin Moskovitz (probably the biggest funder of EA stuff) has a net worth of $13.9 billion. He wouldn’t be able to fund the entire budget of a big charity like Direct Relief (which had the revenue of $1.4 billion in 2018) for very long.

I’ve heard of some EAs wanting to found the next GiveWell-recommended charity, the next Against Malaria Foundation (AMF). But if Direct Relief is more effective than an average charity, maybe Direct Relief does more good to the world than AMF and EAs should be trying to found the next Direct Relief despite the fact that it’s probably less cost-effective than AMF. And actually, if you start a charity that is just as cost-effective as AMF and appeals to exactly the same funders and AMF still has room for more funding, you basically had zero impact because the cost-effectiveness of an average donated dollar remains the same. But I think reality is more complicated than that and this is not the case.

Note that I spent very little time thinking about all the things I wrote above so they may be incorrect or not very relevant.

Thanks for your extensive answer and insight. What you are saying makes sense, especially the points of charities competing for limited resources and the fact that the best charities are many times more-cost effective. The latter makes it incredibly difficult to make the example of Organisation 2 work. Considering that the top intervention is over ten times more cost-effective than the average, focusing on cost-effectiveness seems to be the best choice currently! (imagining to increase the amount of people spending/amount of dollar spending by 900% is completely impossible, and if it would be possible, very counterproductive since charities compete for limited resources)

The link you shared is really helpful to me, thank you!

However I still think that research and insight towards "charity decision-making and reward" to increase the amount people spend for charity and the amount of people spending for charity can prove very useful, in particular to the cost-effective organizations.