This post is the first in Rethink Charity's series on the EA Survey 2019. In this report, we explore the characteristics and tendencies of EAs captured in the survey, including age, education, and rates of veg*nism. In future posts, we will explore how these EAs first heard of and got involved in effective altruism, their donation patterns [EA · GW], cause area preferences [EA · GW], geographic distribution [EA · GW] and their career paths [EA · GW], among others. We are open to requests from the community of analyses they would like to see done, albeit with no guarantee that we can do them. An anonymized public dataset will be made available soon.

This year, the Centre for Effective Altruism generously donated a prize of $1000 (USD) to be awarded to a randomly selected respondent to the EA Survey, for them to donate to any of the organizations listed on EA Funds. To be eligible one needed to provide a valid e-mail address so that they could be contacted. The winner has been contacted by CEA and will be announced within a couple of weeks.

There is clear concern [EA(p) · GW(p)] about the relative demographic homogeneity of the EA community. The EA survey provides an annual snapshot of the EA community. Although it does not sample randomly from all effective altruists, it does provide an important glimpse at demographic attributes among those who have taken the survey. From these respondents, we observe that the majority of these effective altruists look demographically much like those in past years. EAs in the survey continue to be most often male, white, agnostic/atheist, left-leaning, well-educated, and between the ages of 25-34.

After cleaning the data and limiting the data set to those who indicated they both subscribed to the basic ideas of EA and could, however loosely, be described as effective altruists, we sampled a total of 2,513 valid respondents[1] for this report. In total, we surveyed 2,987 people.[2] This is fewer than in 2018, but still enables us to look at the demographics of the effective altruism movement in depth. There is no way to know the true nature of the EA population and no known-to-be-representative sampling frame. As our sampling instrument is biased towards respondents who are subscribers to media outlets associated with effective altruism, readers should bear this limiting factor in mind when drawing inferences or updating priors based on the results presented in this series. 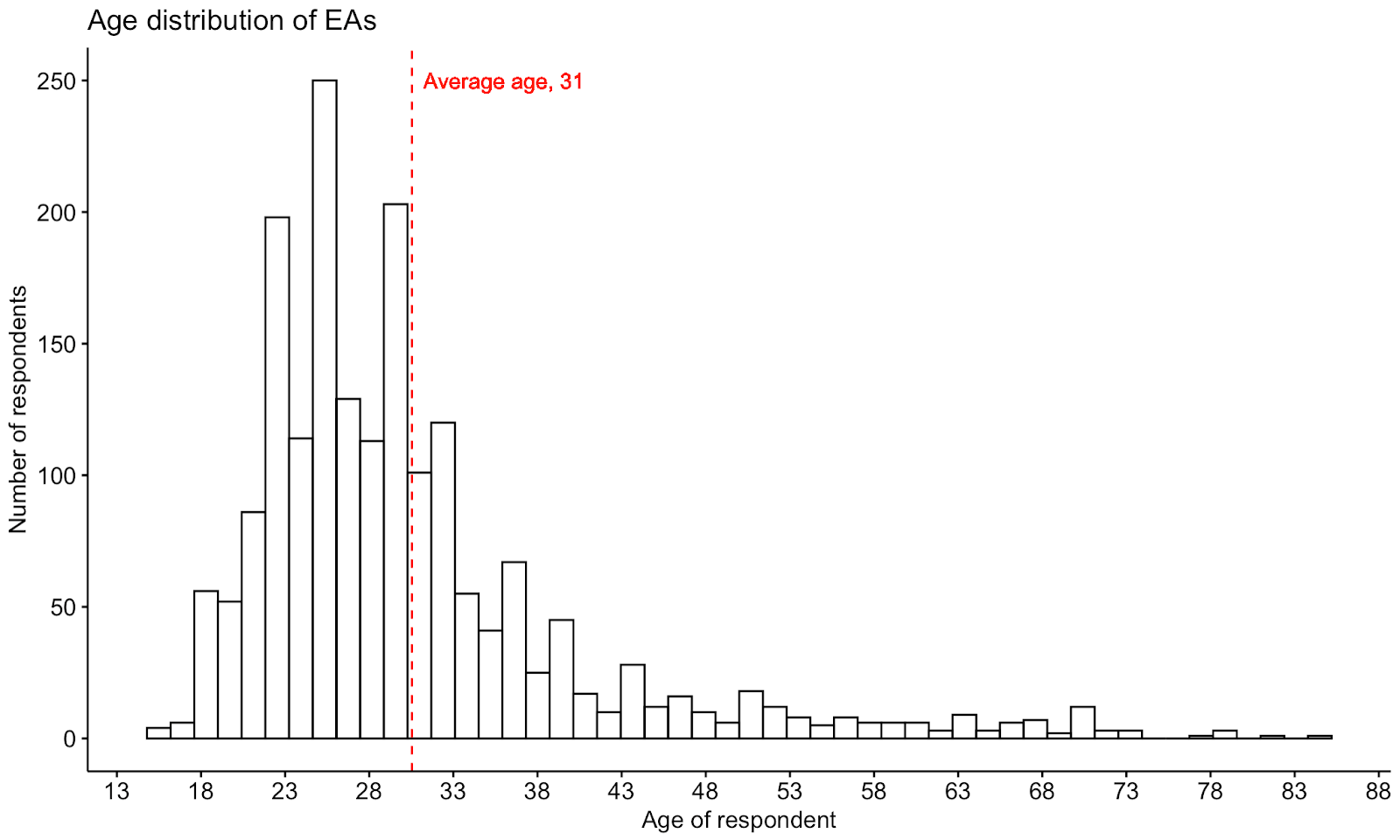 EA appears to still be a movement of twenty- and thirty-somethings. The majority (52%) of the respondents that took the survey can be grouped into the “25-34” range, which has been the case since 2017. The youngest respondent that gave their age was aged 15 and the oldest was 84. The mean age was 31 and the median age was 28, among those who gave a response.

Drawing on data from EA Surveys 2014-2019, we can see that the average EA is 3-4 years older today than 5 years ago. The increase in the mean and median age across the surveys 2014-2019 seems to suggest that EA is aging. However, there could be a lot of differences across years due to different ways of including/excluding participants done by different researchers. In 2019 the average age a person was when they joined EA was 27, median 24,[3] compared to a mean of 28 and median of 24 in 2018’s survey. Those who joined EA in 2019 were younger on average than the sample as a whole but joining EA at an older age than previous cohorts (mean 30, median 25). The average length of time a respondent had been in EA was 3.8 years in 2019, longer than 2018’s 2 years. Half of respondents in 2019 had been in EA 3 years while half of respondents in 2018 had been in EA 1 year. 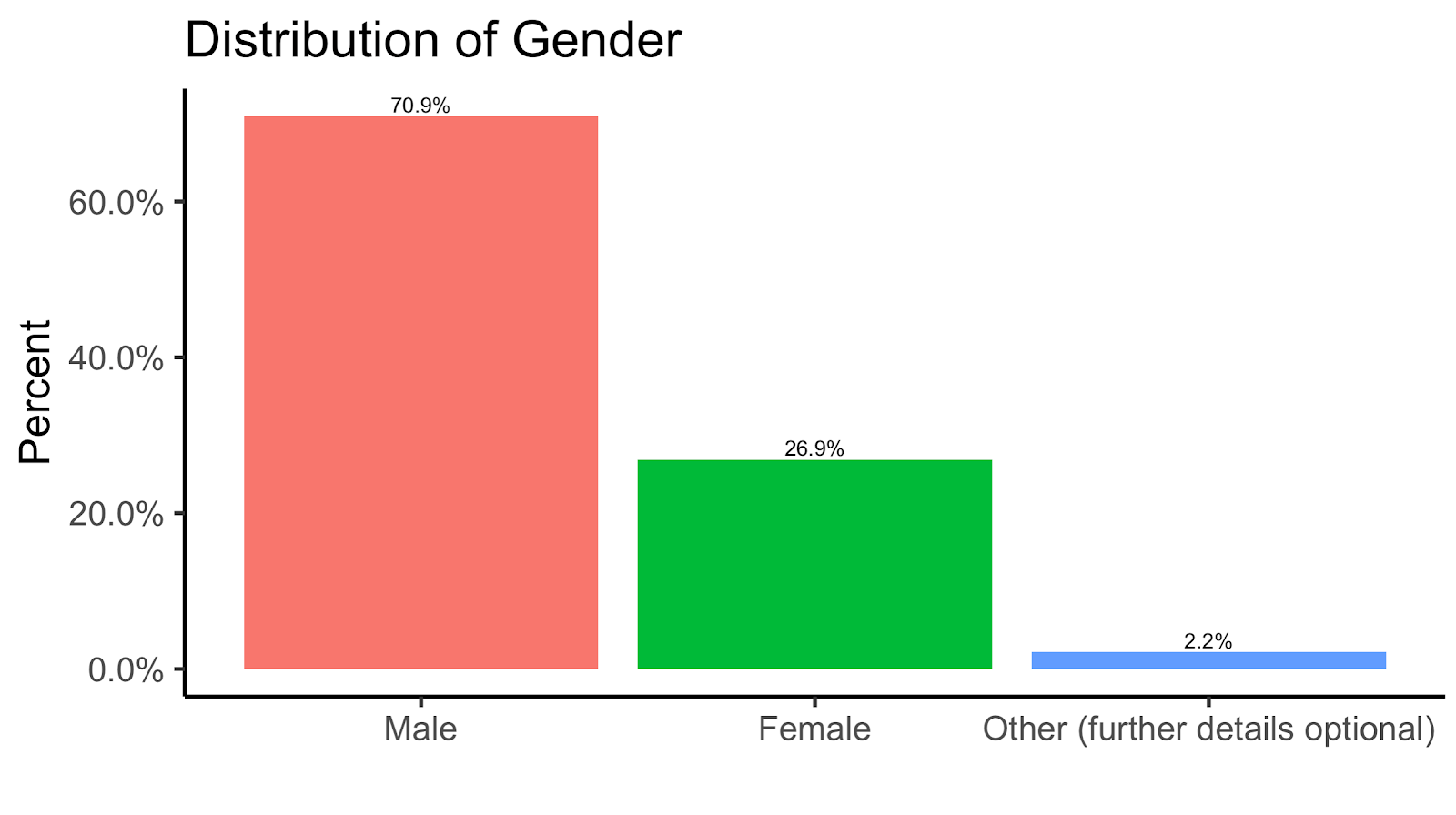 As in previous surveys, a clear majority of people who took the survey reported being male (70.9%) , while around a quarter (26.9%) of respondents reported that they were female, and 2.2.% selected “other”. [4] The percentage of male respondents was marginally higher in 2019 than in the previous two years (67% in 2018 and 70.1% in 2017) . There does not appear to be a difference in average age between genders.

Effective altruists report being highly educated, with 94% having attained, or are in the process of completing a degree. A plurality of respondents reported the highest level of education engaged in as a bachelor's degree (42%) , followed by master’s degrees (30%) , then doctoral degrees (16%) . This is quite similar to 2018’s survey, though notably there is a greater share of people with PhDs.The following chart shows the numbers of respondents within each education level. 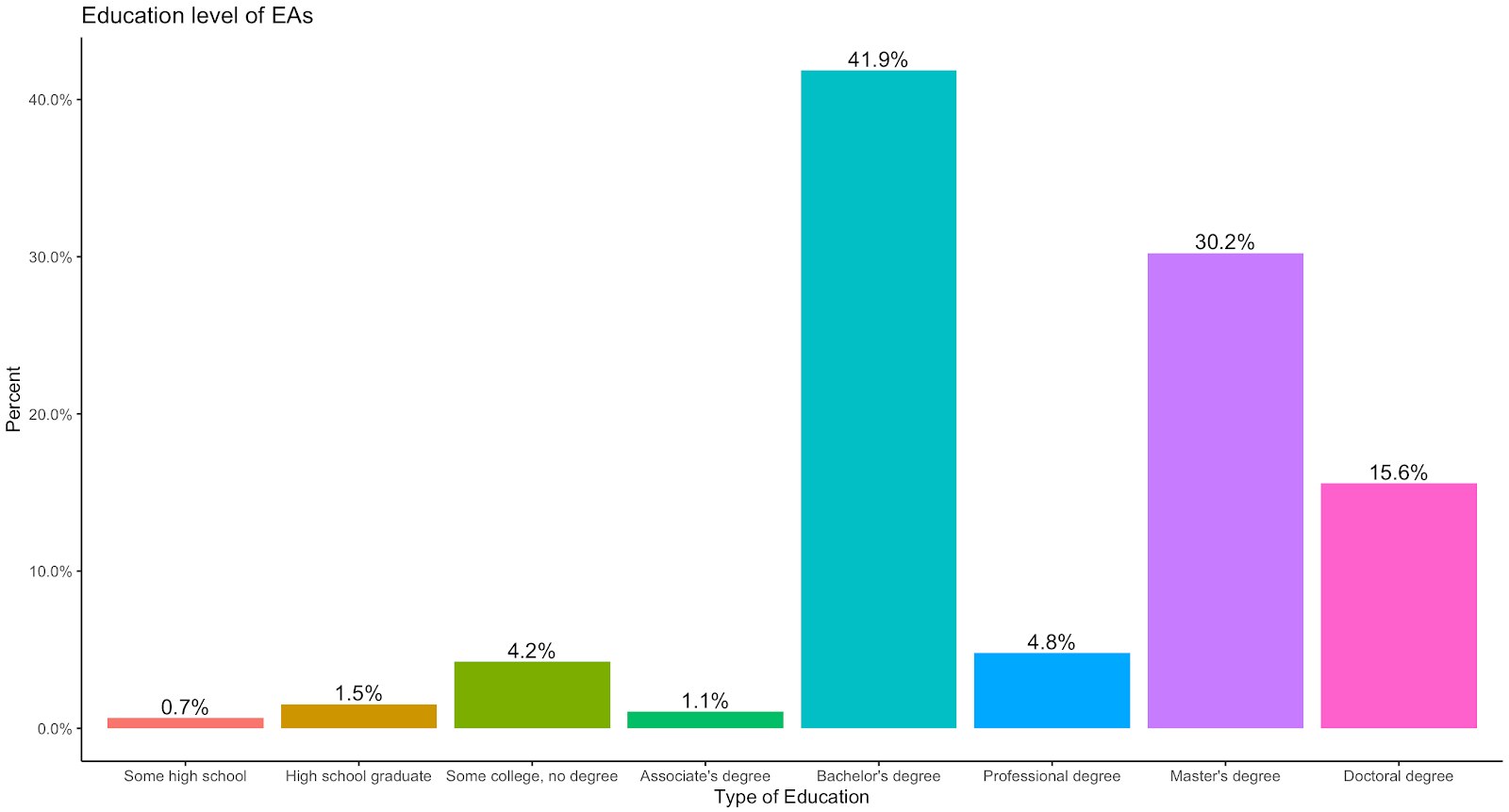 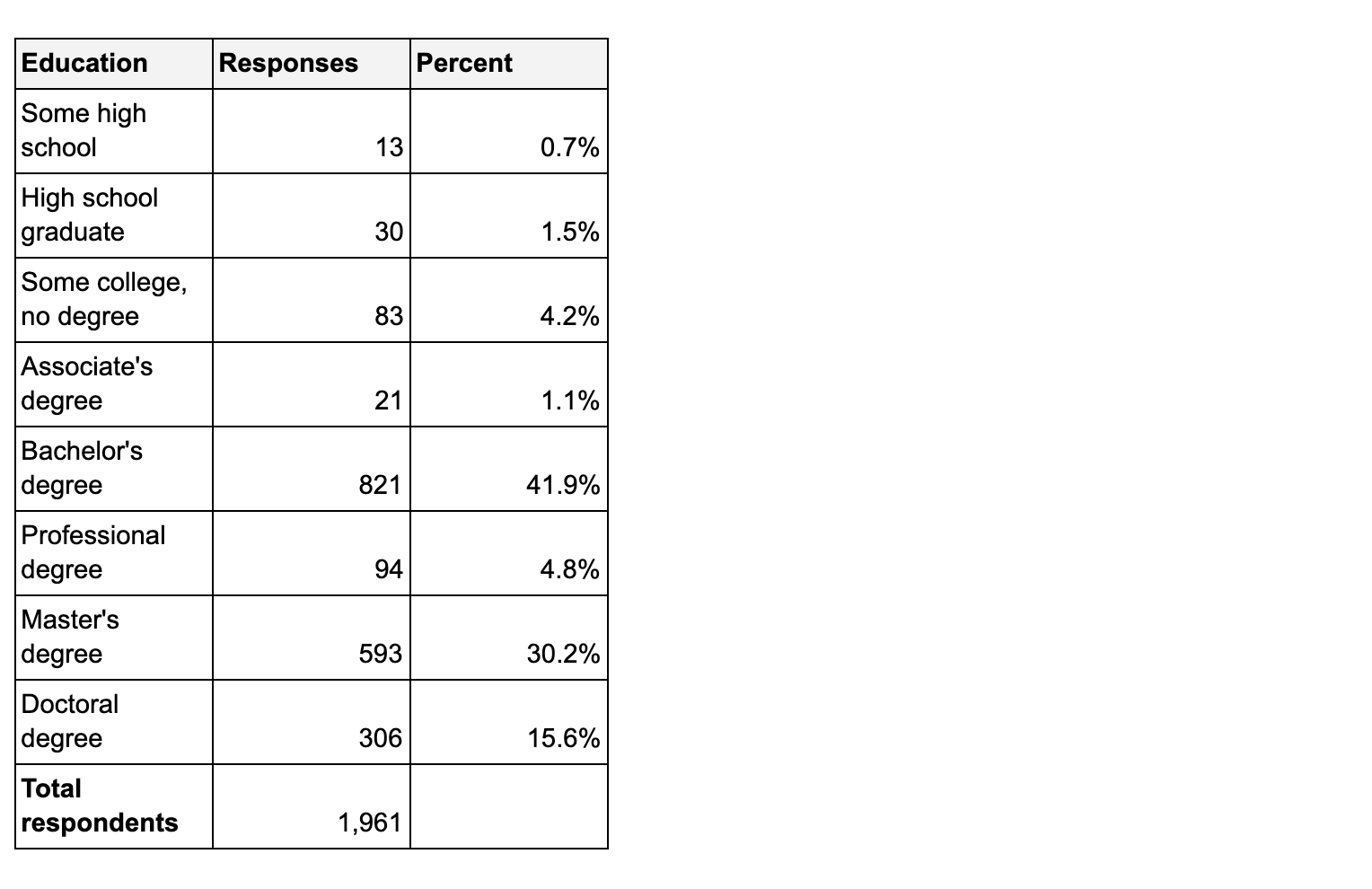 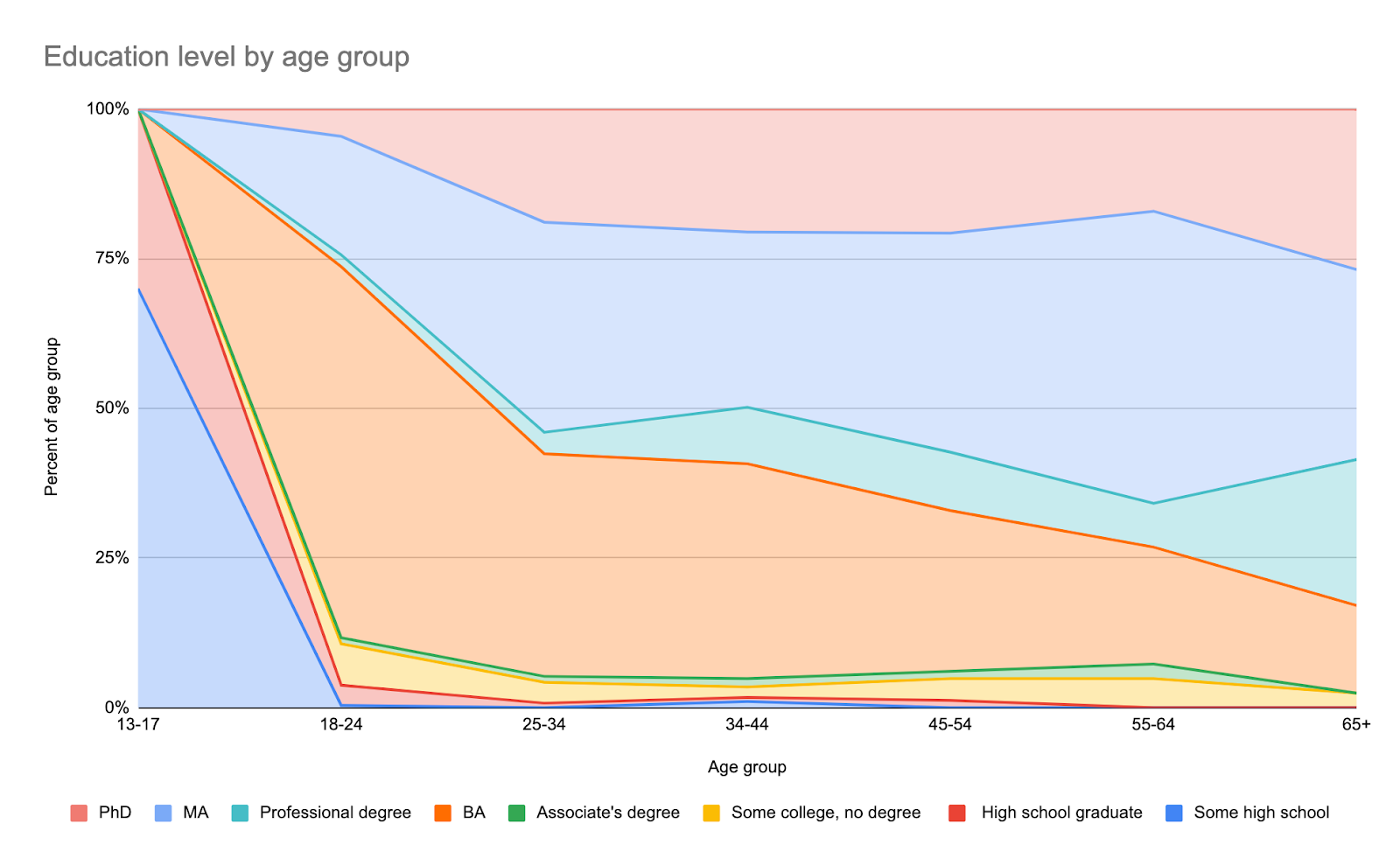 Are EAs an educational elite?

As one measure of how elitist [EA · GW] the EA movement is, we can look at the educational pedigree of those who responded to the survey. We asked respondents which universities did you attend for your Associate's and/or Bachelor's degree? and received valid responses from 1,556 EAs. This data will not be included in the forthcoming public dataset.The universities attended by 1% or more of EAs include six of the top 10 QS World University ranked universities (the other four top 10 QS ranked universities being within the top 20 most commonly attended universities by EAs) , and two of the other top responses are among the best universities in their respective countries. 7.7% of all responses were for Oxford or Cambridge and 6.8% for Ivy League schools, meaning more than 1 in 7 EAs overall come from this small set of Ivy/Oxbridge universities. [5] 20% (310) of EAs in the survey had attended at least one of the top 20 universities in the world. Of those who reported a gender and university, 74% of those who went to a top 20 university were male and 26% were female. 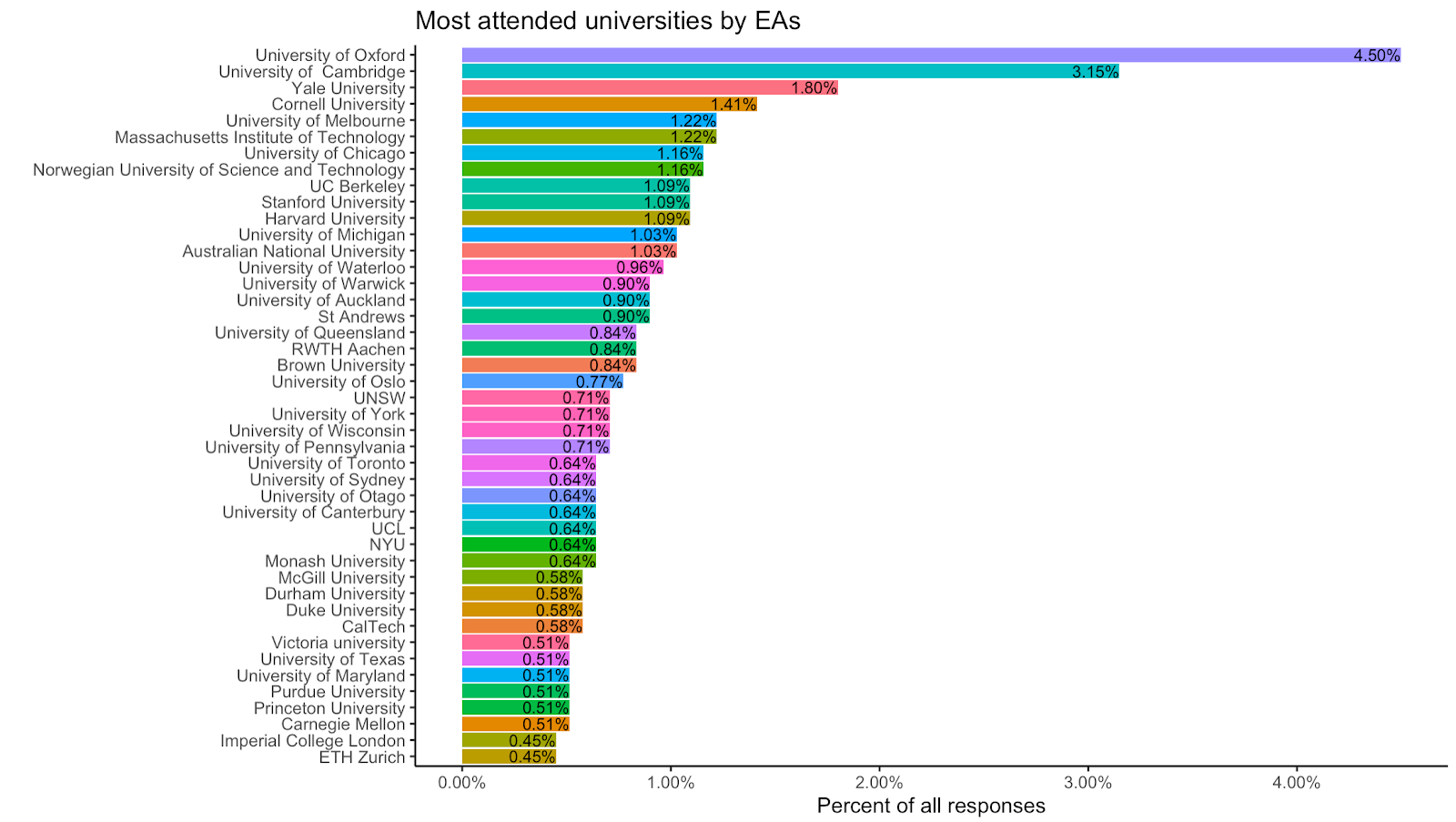 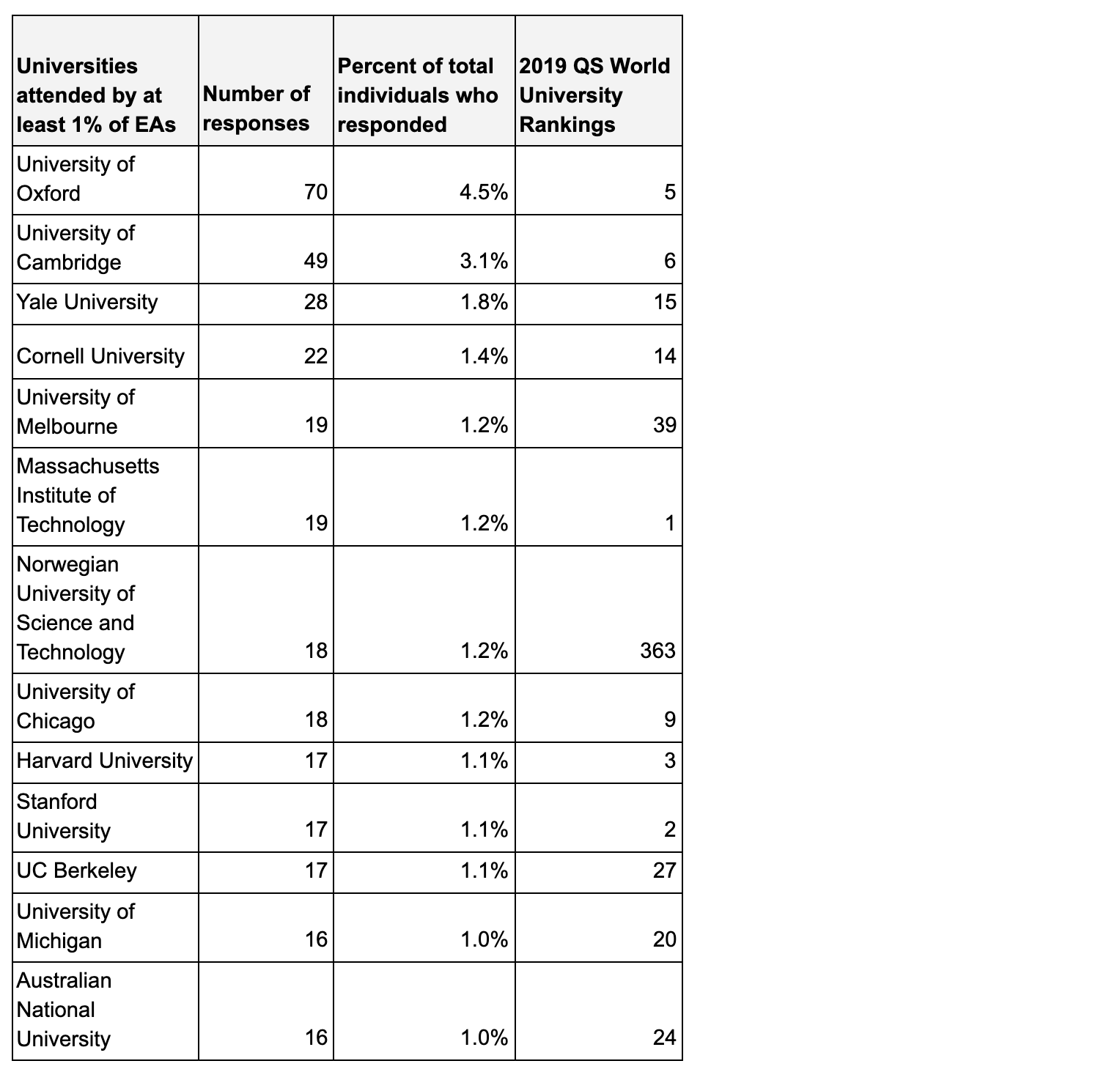 The subjects that EAs have chosen to focus on vary. 1,916 respondents provided what subject they studied. This question was a multi-select, so respondents had the opportunity to select multiple different categories of studies. 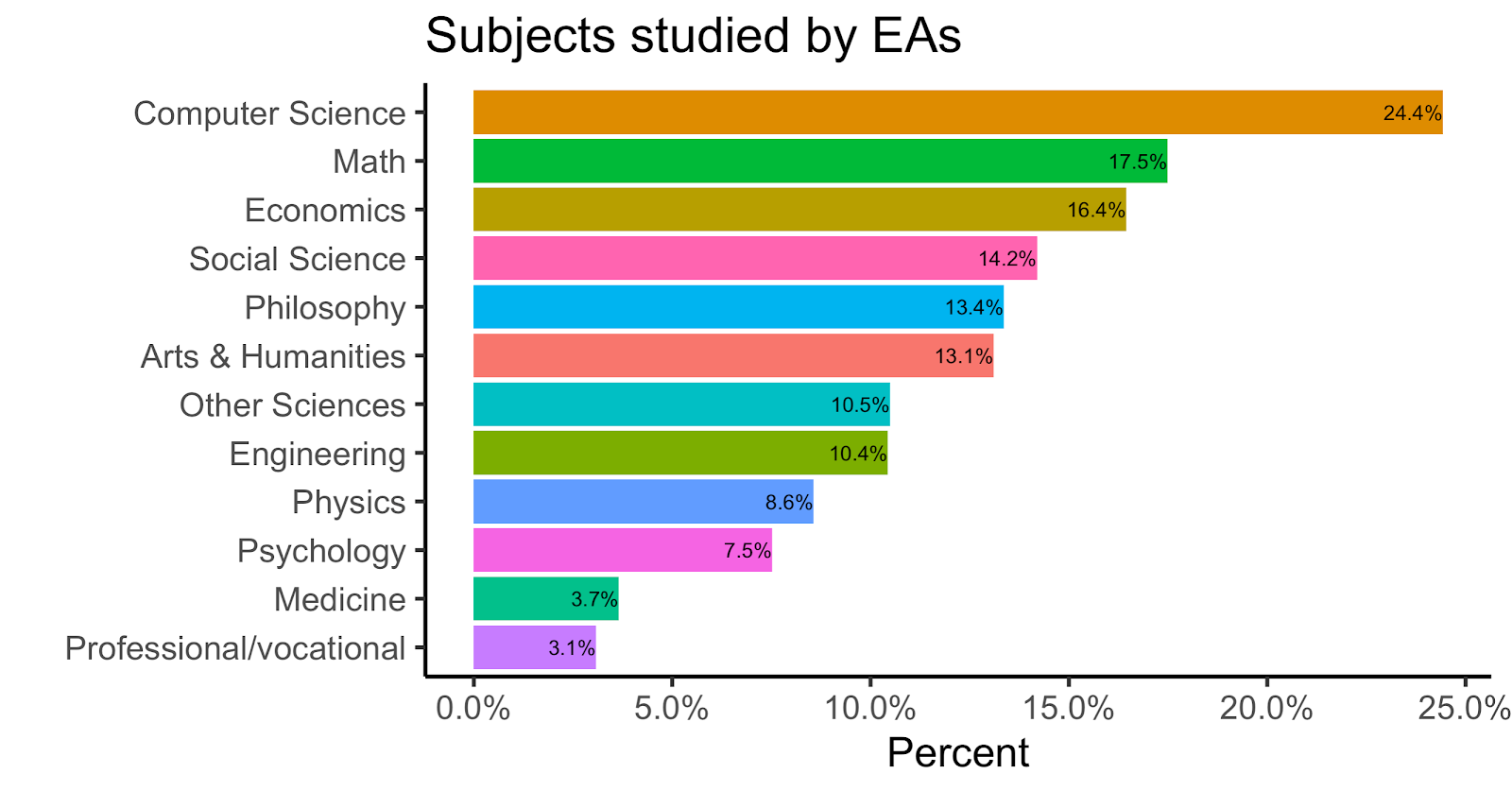 A majority of effective altruists reported studying subjects considered to be STEM. The most chosen subjects of study were, as in 2018, Computer Science and Math. 45% of those who selected Computer Science joined EA since 2017. Compared to 2018, Philosophy has dropped lower down the list from third most popular subject of study to fifth while Economics has risen to take its place. It should be noted that in 2018, Economics received only one fewer response than Philosophy so not much should be made of the change in order and this year’s sample appears to have attracted a smaller share of responses from Philosophy students than in previous years. 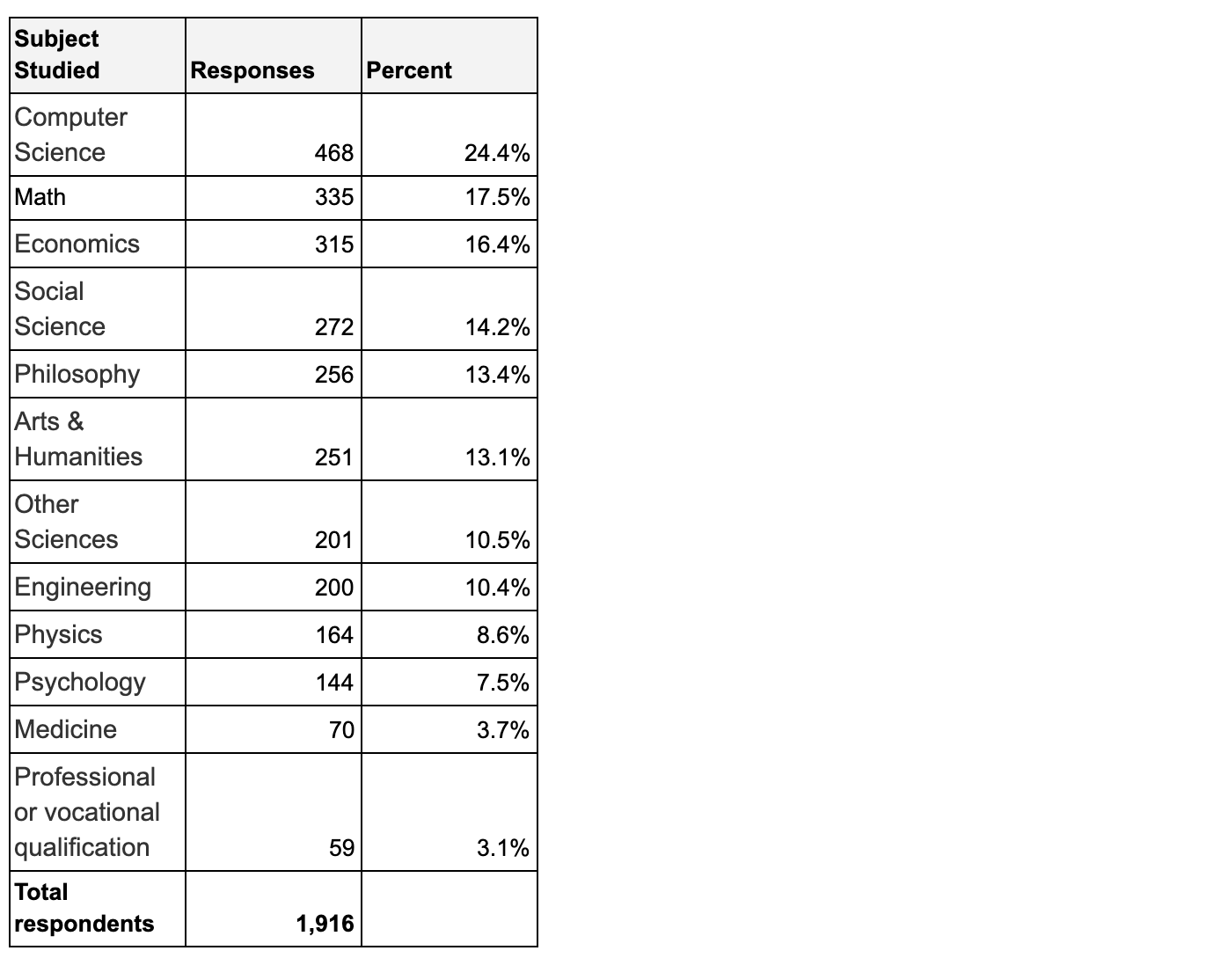 Almost a majority of effective altruists report being employed full-time (49.7%) , followed by people who are full-time students (21%) . This is an increase in full-time employed EAs compared to 2018 (43.1%) .A majority of 13-24 year olds report being students (full or part time) and among those who heard of EA in 2019, 41% were employed full-time, while 38% were full-time students. The shares of part-time students, homemakers, retirees, and those not employed but not looking for work are all down slightly from 2018 while the remaining categories are slightly up. Note that this question was asked as a multi select, so these were not mutually exclusive. The overall order of response categories is the same as in 2018. In a separate upcoming post we will explore the cross-tabs to understand patterns between skills and backgrounds and those who plan to work at EA organizations and who have applied or already work(ed) in an EA organization. 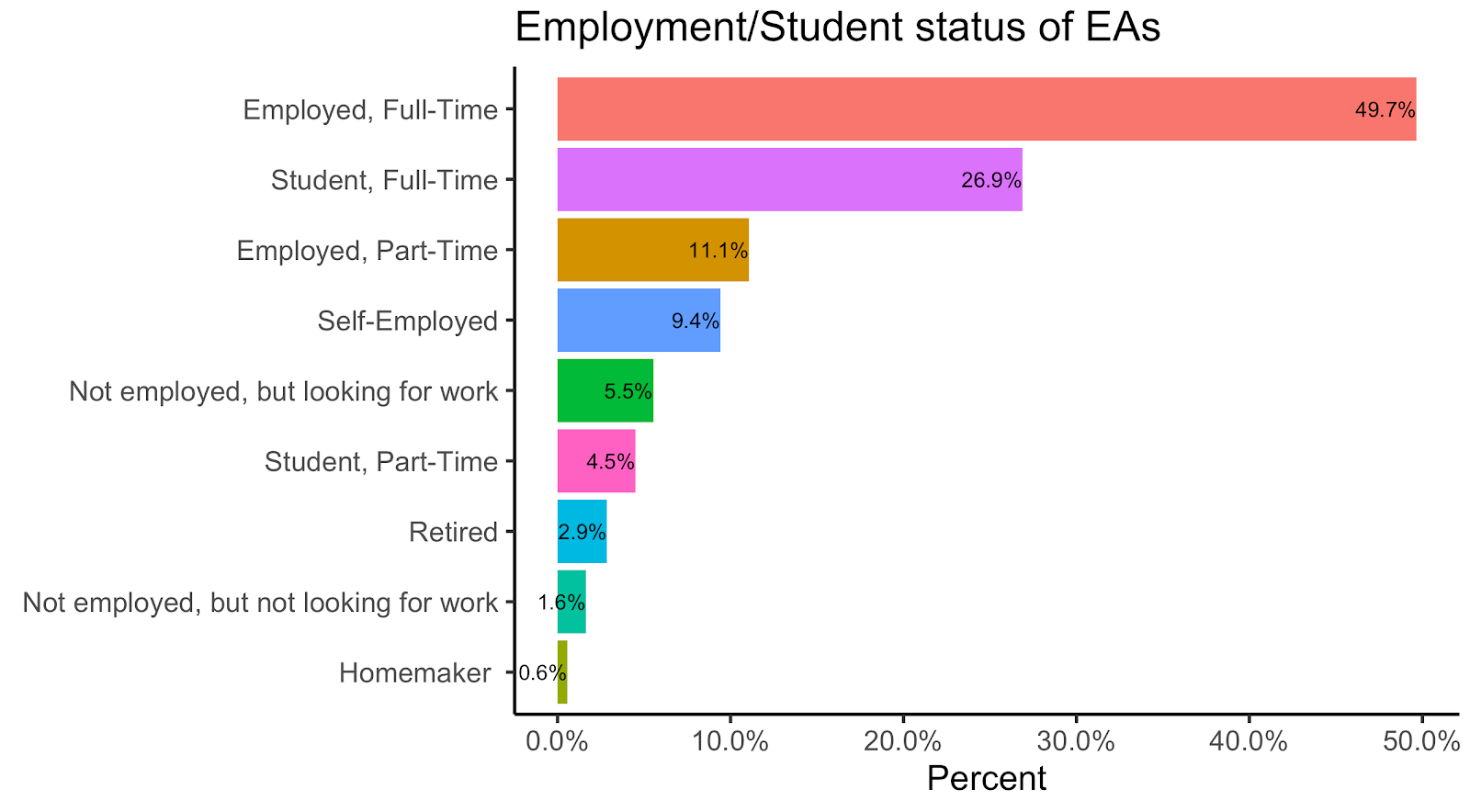 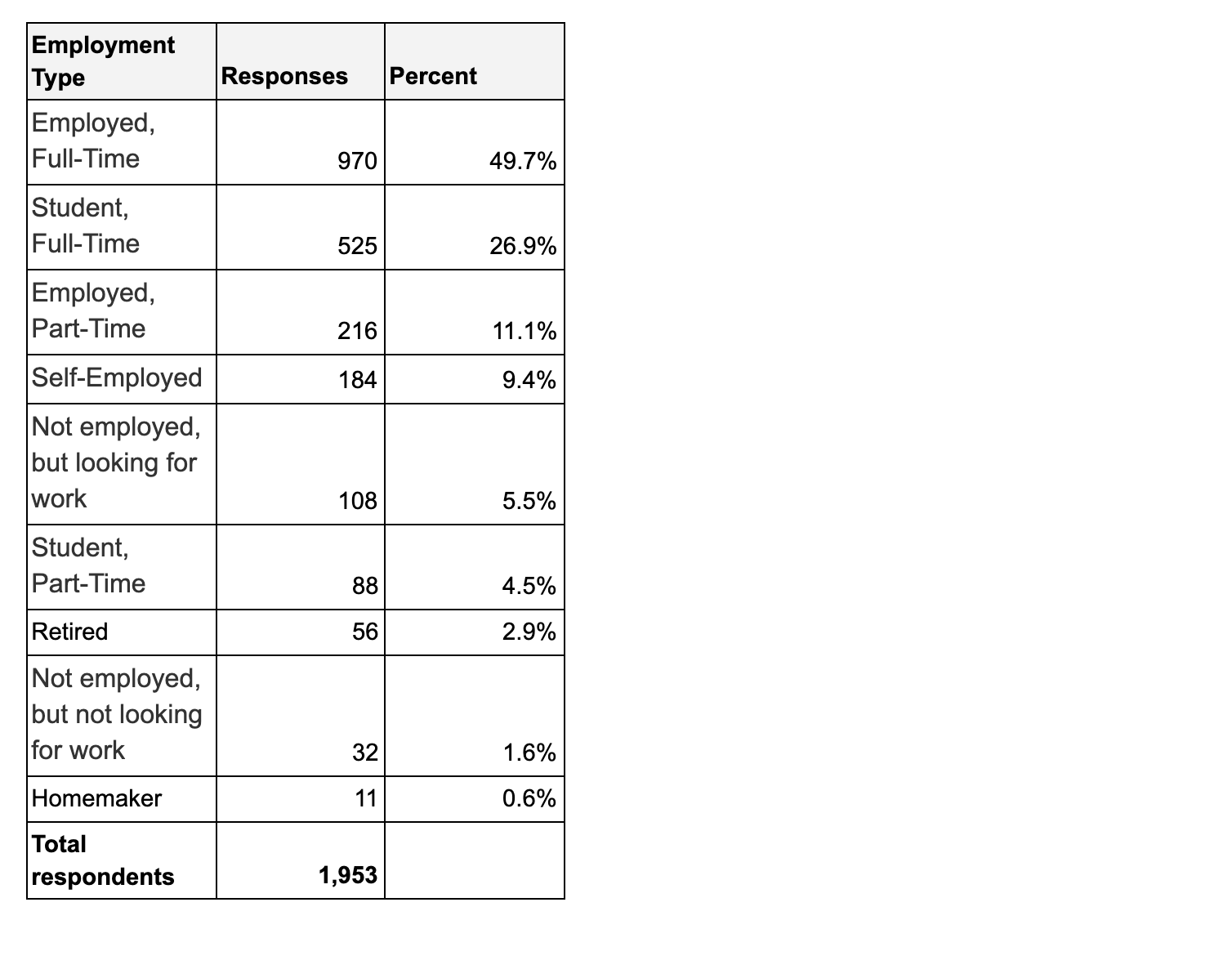 Of the respondents who answered the ethnicity question (which allowed for multiple selection) , [6] the majority of responses were from people who self-identified as “white” (86.9%) . This is lower than the percent who selected white in 2018 (89%) and higher than in 2017 (78%) , but may be more the result of sampling noise rather than any meaningful trend of EA becoming more or less diverse.Compared to 2018, there were slightly higher percentages of respondents selecting Asian, hispanic or black, and fewer selecting American Indian/Alaskan Native or Hawaiian/pacific islander. ~62% of respondents who provided information on both gender and race reported being white and male, unchanged from 2018. 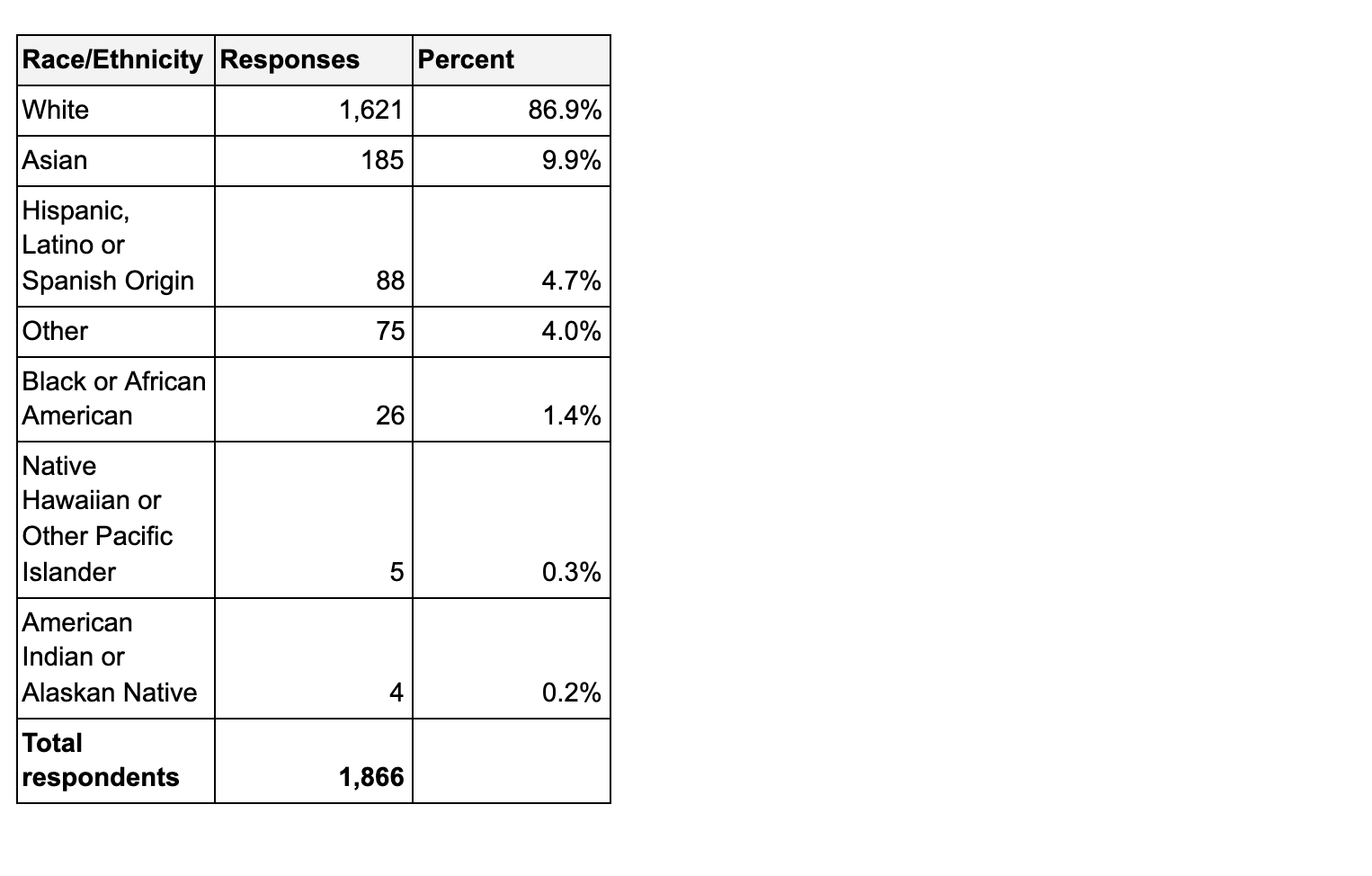 Diets of effective altruists vary, as is evidenced by the chart below. Those who eat meat and those that abstain from eating meat are present in roughly equal amounts.46% claim to be vegan or vegetarian, while 48% consume meat of some form. Compared to traditional American diets , vegetarians and vegans are overrepresented in effective altruism. There does not seem to be a trend of increasing veg*nism, with the share being unchanged since 2018, and the share of those reporting that they are attempting to reduce the amount of meat consumption is very similar (29.8% in 2018 to 31.1% in 2019) . Examining those who selected “other (please specify) ”, most respondents detailed the extent to which they are veg*n, but also how they are reducing their meat consumption or other categories such as religious or low-sugar diets. 43% of males, 55% of females reported being vegan or vegetarian. 14% of male respondents reporting they eat meat (and not reporting an attempt to reduce their meat consumption) , compared with 6% of female respondents. Both of these are lower than in 2018 and the gender gap has narrowed. 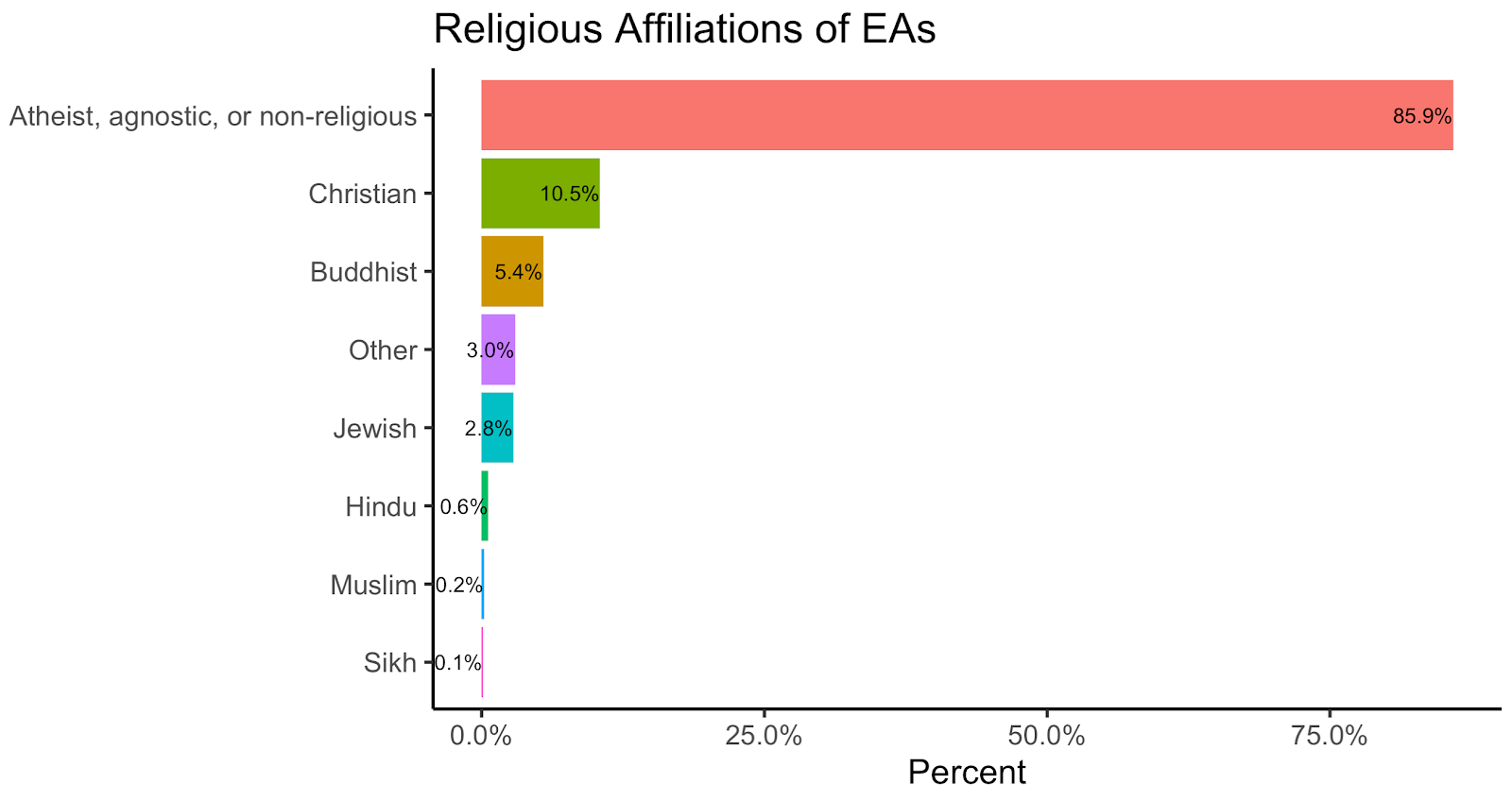 The majority of respondents (72%) reported identifying with the Left or Center Left politically and just over 3% were on the Right or Center Right, very similar to 2018. [8] Depending on the country, the meaning of Left and Right can vary, or not even be a salient political dimension. In an upcoming post we can explore this somewhat with our data on the geographic distribution of EAs, but note this only tells us where a respondent currently lives, not the national political culture they were raised in. 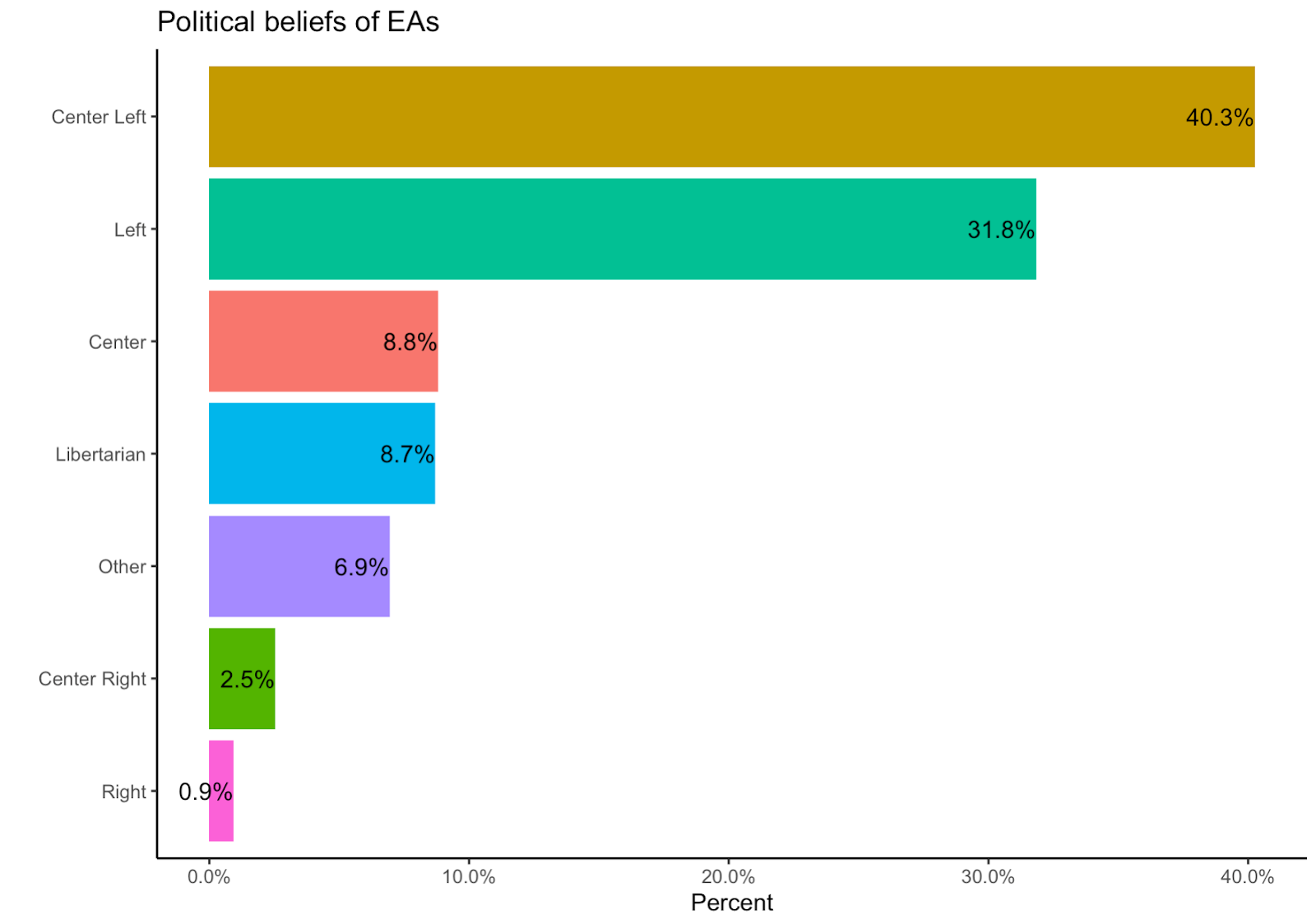 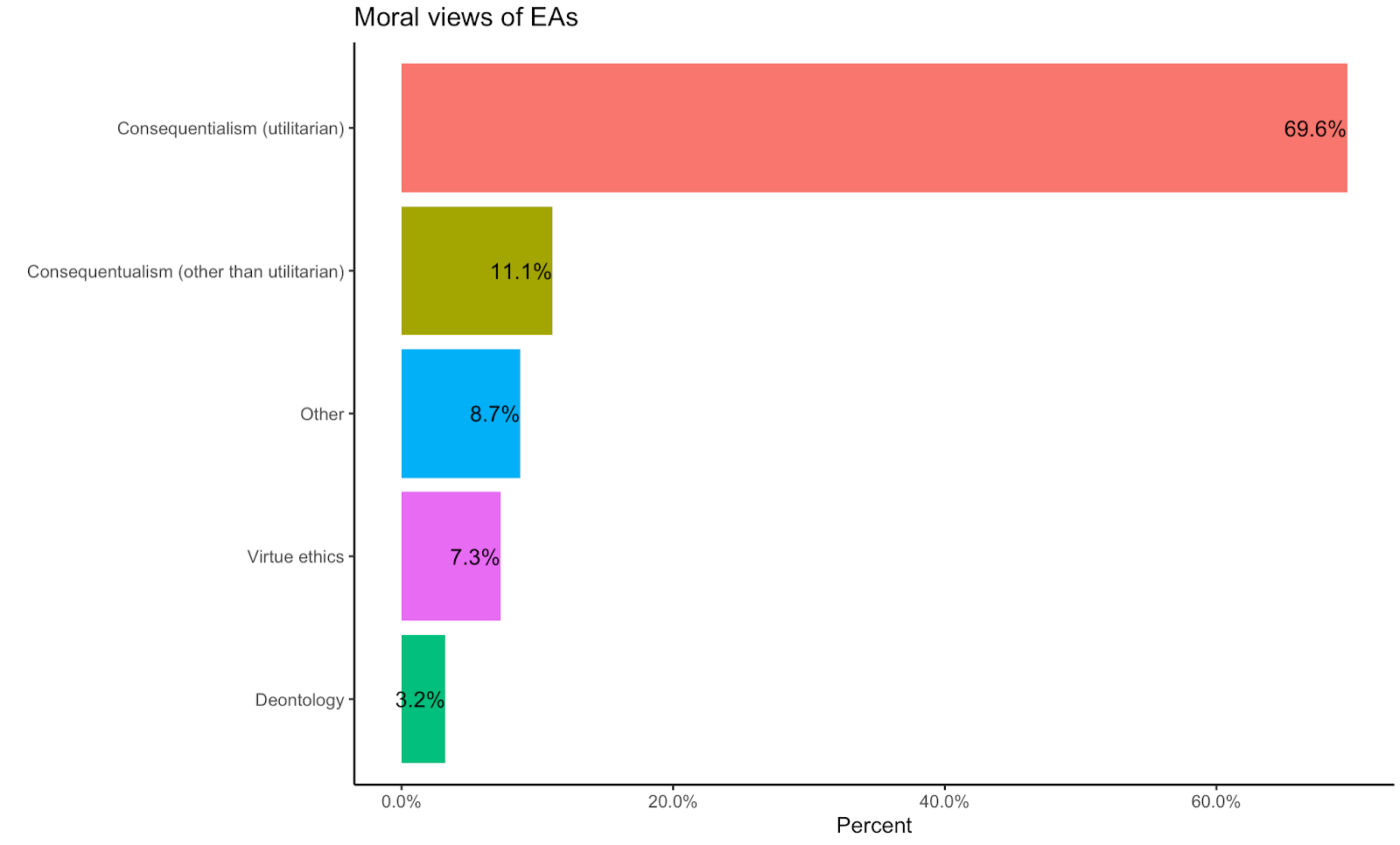 As in previous surveys, the EA community appears to live in Europe and North America more than the world as a whole. The top countries EAs live in remain unchanged from last year. A plurality of respondents reported living in the United States (39%) , followed by the UK (16%) , Germany (7%) , Australia (7%) and Canada (4%) . In total, there were responses for 60 different nations, 23 of which had 10 or more responses. A future post will explore explore geographic differences in EA across the globe in more detail. 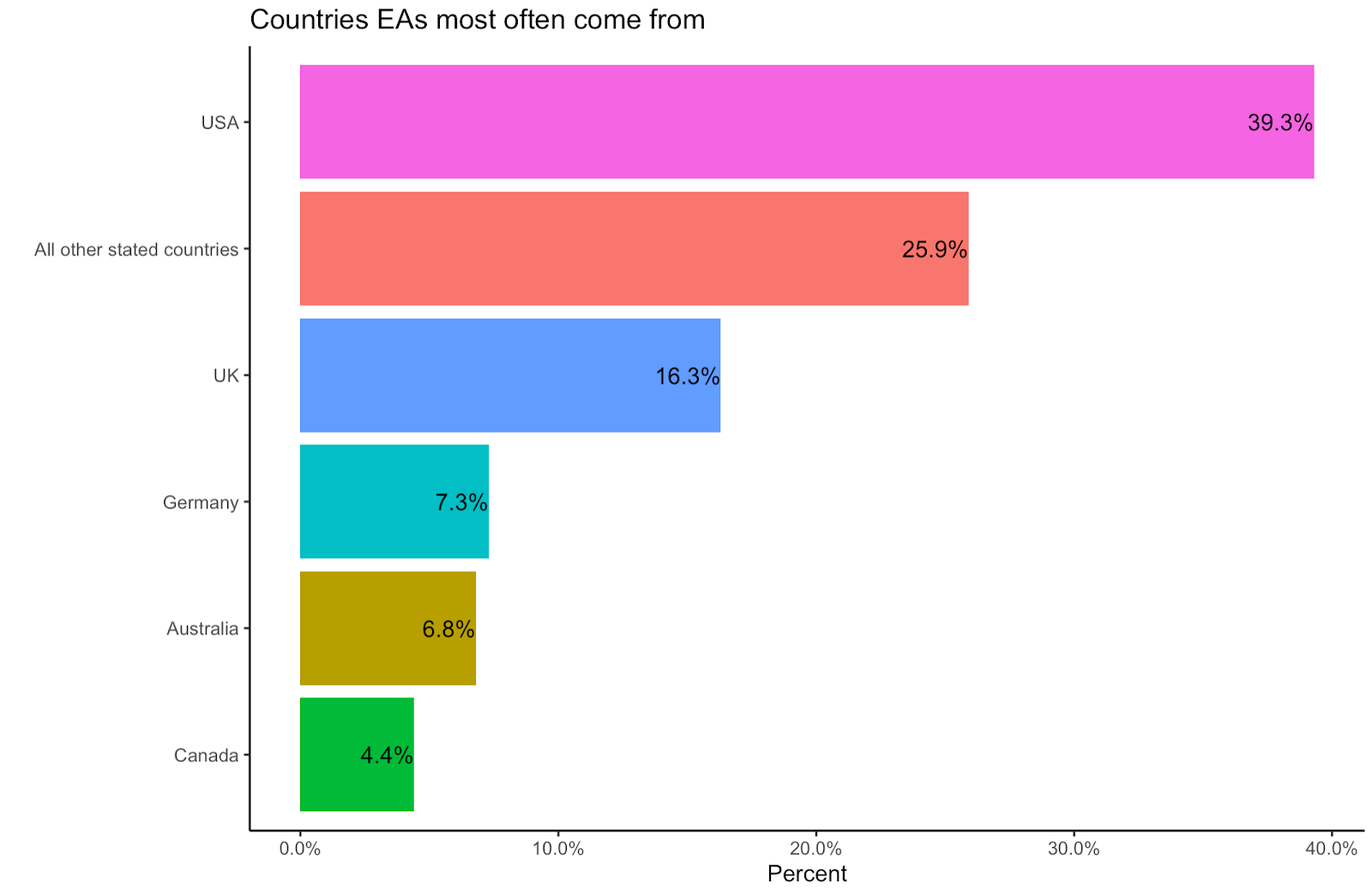 This essay was written by Neil Dullaghan. Thanks to David Moss, Jason Schukraft, Tee Barnett, and Peter Hurford for comments.

We would also like to express our appreciation to the Centre for Effective Altruism and the EA Meta Fund for supporting our work. Thanks also to everyone who took and shared the survey.

If you like our work, please consider subscribing to our newsletter . You can see all our work to date here.